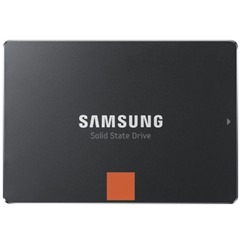 Nearly two years ago I bought a Sony Vaio T13 laptop as my combined work and home main computer. It’s a nice piece of kit and has served me well. When I bought it I commented that I’d like to have had an SSD drive rather than the conventional 500GB “spinning rust” hybrid drive with which it came. At the time specifying a 512GB SSD from the outset was eyewateringly expensive.

Nearly 2 years later I finally got around to making the upgrade! And it was remarkably straightforward. Largely through laziness I went for the 512GB SSD drive I’d identified nearly two years ago – the Samsung 840 Pro, the price had dropped from something like £450 to £230. There are cheaper options, down to about £150 but I’m already saving money if the Pro started at £450* ;-)

The drive itself is rather insubstantial, turning up in a padded envelope that just doesn’t feel heavy enough. It comes with a CD containing Data Migration software and some wizard diagnostic software. The migration software clones your current hard drive to the new SSD. You need to get a SATA to USB adaptor, like this one, to do this. Cloning my drive took about 5 hours but I need to decrypt it first which was a 24 hour or so job – my drive was encrypted with Bitlocker.

With SSD containing contents of original drive cloned on to it in hand, all that is required is to open up laptop and swap the drives over. This turns out to be really easy on the Vaio: unscrew battery, unscrew drive compartment cover, unscrew drive cage from from laptop, remove old hard drive, remove drive cage from old drive, put drive cage on new drive and then repeat steps to remove old drive in reverse to install new drive.

A set of dinky screw drivers is handy and it would have helped if I’d realised the drive cage was screwed to the laptop frame before I started prising at it with the big screwdriver but no harm done.

I actually found replacing the hard drive on my laptop easy than replacing or adding a drive to a desktop. Whenever I’ve added a hard drive to a desktop there has been cursing and skinned knuckles in removing/adding the power connector and unseemly cowboying of the drive into some ill fitting drive cage using left over grub screws. Compared to this working on the Vaio was a joy. You might want to test the “lie of the land” on your own model of laptop in terms of accessibility to the drive. My suspicion is that it will be generally straightforward since laptops often have the drive size as an option.

The moment of truth is rebooting after installation – this Just WorkedTM  which was a relief. First hints of improved performance were in re-encrypting the hard drive. Decrypting the conventional drive the peak IO transfer rate was about 30MB/s whilst with the SSD drive the peak was around 150MB/s. Opening up Microsoft Office applications is much snappier, as is opening Sublime Text. I should probably have a go at uploading a multi-gigabyte CSV file to MySQL, which I know is heavily IO bound but I can’t be bothered. All in all my laptop just feels rather more responsive.

I played a bit with the supplied diagnostic wizard software but didn’t think much of it, so promptly uninstalled it.

Overall: much more straightforward and less scary than I anticipated – I recommend this approach to anyone with a laptop to refresh and a modicum of courage.

*This logic brought to you by Mrs SomeBeans and her Yamaha Thundercat purchase!

I thought I’d mix together a review of my shiny new laptop (a Sony Vaio T13) with one of Windows 8 which came pre-installed on the laptop.

Six years after buying my last laptop I have replaced it with another Sony Vaio. At the time I bought the first one I didn’t think I would do this, my old Sony Vaio (VGN-SZ2M) is a nice machine but it was infested with Sony cruftware which added little functionality and what it did try to add didn’t seem to work and  the couriers Sony selected left it with a neighbour without asking whether this was appropriate. It had a weird black plastic finish which was probably described as "carbon fibre". It’s worked fine although I found the 80GB hard disk a little cramped and as the years went by it felt slower and slower when compared to the other machines I use.

After poking around extensively I finally decided on another Sony Vaio, other contenders were the Lenovo Yoga 13 (limited availability and would that hinge really hold out?), the Acer Aspire S7 (more pricey for a poorer config and apparently no option for a big conventional drive) and offerings from Samsung, Toshiba and Dell – the bar for being a contender in this limited set was the touchscreen. I did look at non-touchscreen variants too and particularly liked the look of the Lenovo IdeaPad U410.

Having decided, I bought direct from Sony getting to get a bit more configuration flexibility adding 8GB RAM, an i7 processor and going for the 32GB SSD/500GB conventional hard drive combination, this is an ultrabook class laptop with a 13.3" touchscreen, no optical drive, and Windows 8. I liked the idea of getting a pure SSD system but the price Sony charges for the upgrade is about double the price of the highly regarded Samsung 840 Pro series SSDs so maybe I’ll be opening the thing up soon. It weighs 1.5kg which is light but not the lightest in this class, I decided on a touchscreen since it didn’t seem to add hugely to the cost and it isn’t something you can retrofit should the desire arise.

It is a very beautiful thing: brushed metal with chromed highlights, and in its pristine state it comes out of hibernate very quickly.

Compared to my old laptop it has the same footprint, unsurprising since the screen is the same size. The keyboard is narrower though, losing a column of keys, but the device is about half the thickness  – having lost the optical drive.

I worried a little about the monolithic touchpad with no separate left and right mouse buttons but it has a positive click in these two locations so I’ve not noticed the lack of separate buttons.

The screen resolution may be a little deficient (1366×768) but it is comparable with most of the laptops in its class and I intend using it on an external monitor anyway.

There is a small infestation of cruftware, featuring an update centre which seems to struggle to provide the necessary bandwith and an update-able electronic manual which I can’t seem to get hold of because the instructions for downloading it take you around in a loop.

As if in pique my old desktop PC failed shortly after I got the new Vaio so I’m using it as my sole computer for now, this works fine except it is a pain to install CD based software for various bits of hardware (quite why my video camera shipped with 4 CDs of software I don’t understand).

So overall – the Sony Vaio gets an A, a tick or some number of stars between 5 and 10. 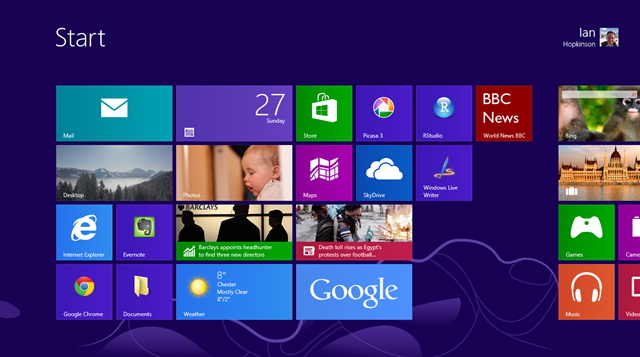 I have a bit of a habit for getting computers with brand new Microsoft operating systems, although fortunately I skipped Windows Vista. Windows 8 takes a bit of getting used to, the best way of thinking about it is as Windows 7 with a mobile phone interface dropped on top of it. This is both good and bad. Personally I rather like Windows 7, and I’m also rather pleased with the Android-based touchscreen interface on my HTC Desire phone but the combination of the two is a bit disturbing.

Actually "a bit disturbing" is wrong "crap" would be better, the new style apps follow very different UI rules from conventional Windows apps and major in form over content – for example the pre-installed twitter app, although pretty and swooshy with the touchscreen is utterly useless as a twitter client. Not only does it have limited functionality but in order to view anything but the briefest of timelines you need to flap your arm about like a deranged semaphorist. The twitter app from twitter is marginally more functional but looks like the portrait aspect ratio phone screen placed in the middle of a wide laptop screen. Comparing my Android phone and tablet it strikes me few people have cracked scaling apps from phone to tablet size screens, let alone all the way to laptop screen sizes.

Live tiles offer interesting possibilities but they are constrained to one of two sizes, and I’ve yet to find one which does anything particularly interesting.

The only real redeeming feature of the new Windows 8 additions is that, once you’ve accepted the concept, the Start screen is better than the old Start button.

Not so long ago I would have "struck down upon thee with great vengeance and furious anger those who" touched the screen of any device I owned, these days I’m a little bit more relaxed: I find the touchscreen a nice adjunct to more conventional input but I have a smeary screen now.

It seems to me there are a limited number of things you need to "get" about an operating system in order to use it with a peaceful mind, for Windows 7 a big one was that you didn’t need to go stumbling through a cascade of entries in the Start menu – you just start typing the name of your desired application into the search box and it was revealed fairly promptly. Start typing when you are on the Windows 8 Start screen and you launch just such a search – how the hell you’re supposed to know this is a mystery to me. And this seems like one of the core problems with Windows 8 – there are some nice little interface features but there’s no way you would guess they were there or find them by accident.

Windows 8 is keen for you to login using a Microsoft account, it is possible to just use a local account but I thought “in for a penny, in for a pound” and went ahead and set one up. Interestingly you can see the benefit of this approach when using Google Chrome, when I installed Chrome it automatically installed the plugins I have on other PCs, my autocorrect settings and so forth – instantly I was at home. I guess this is the longer term plan for Windows 8. It also wants me to have an xbox account to buy music and video.

Some hints for new users of Windows 8:

On the last item: this seems a bit bonkers – the video app on the mobile-style interface can see your video library perhaps containing an unrelenting series of videos of your growing child which will almost inevitably be in MPEG2 format as a default so crippling this functionality seems a bit stupid.

Bottom line: Windows 8 is very pretty and the Start screen is, in my view, better than the old Windows 7 Start menu once you’ve got your head around it. The idea of putting a mobile phone interface, with mobile phone style apps, on top of a desktop interface is stupid – my opinion on this may change if I see some apps that are optimised for laptops. Mobile interfaces such as iOS and Android are optimised for consumption which is fine, but many people will still be getting PC class devices to do “work” and for the main the new mobile interface in Windows 8 gets in the way of that.

And now to install Ubuntu on it… a process so exciting I have made it the subject of a second blog post.