An introduction to the big and shiny

So off to university I skipped, with paternal instructions to “blossom”. I did BSc Chemical Physics at Bristol University. This is a fine course for the indecisive, such as myself who couldn’t decide whether they were chemists or physicists. There were only 16 students in my year, we could all fit in one lift in the physics building. The chemical physics degree involves most of the first year chemistry and physics courses, but in later years you drop organic chemistry, particle physics and astrophysics to make space to do courses in the rest of chemistry and physics. This training means I’m less bemused by molecules than the majority of physicists.

It was at Bristol that I was introduced to big, shiny machines for doing science: for my final year project I worked on Extended X-ray Absorption Fine Structure (EXAFS) at the Daresbury Synchrotron Radiation Source (SRS).

I was using EXAFS to discover something about the structure of molecules in solution, and the arrangement of a glass around metal ions. This is typical of the sorts of study done at synchrotron sources: finding exactly where the atoms in a particular material. Where the atoms are helps you understand the properties of the material: what reactions does it catalyse, how well does it conduct, how strong is it, and so on.

The synchrotron radiation source is a device for producing huge quantities of light all the way across the spectrum from x-rays to ultra-violet light, passing through the visible spectrum on the way. To do this you make electrons go round and round in circles really fast inside an evacuated tube, as they go around they emit electromagnetic radiation: here’s a practical application of relativity – the electrons are traveling at a substantial fraction of the speed of light, so to calculate (and control) their behaviour you need to include relativistic effects. X-rays are actually emitted when the electrons pass through the intriguingly labelled wigglers and undulators – sets of cunningly arranged magnets around the evacuated tube.

The SRS was a pretty big machine – 30 metres in diameter, it closed at the end of 2008 to be replaced by Diamond which is substantially larger. You can see SRS, along with Diamond (near Harwell) and the ESRF in Grenoble, which is even bigger still, on this Google Map. The ring shape of SRS is just about apparent, Diamond and ESRF are very obviously rings.

I’ve worked in several big science facilities (all of them either neutron or synchrotron sources), they have  some common features. Separate instruments cluster around either a ring shaped source or a central point – a beam line (usually an evacuated metal tube) runs from the source to your experiment. The instruments have been built for different consortia by a small team and then used by scientists from around the world. The instruments are scattered around warehouse-sized sheds, filled with a wide range of machinery (which generally contribute to rather high background noise). The control stations for each instrument may be in portacabins, or small corrals. For neutron and x-ray facilities there are a lot of really big concrete blocks around to block harmful radiation.

The deal with working on these instruments is that they run 24 hours a day, and you apply for time on them. If your application is successful then you get to use the apparatus for a block of time, typically a couple of days or so. Some users are lucky: their experiments take days or hours to run, so they can pop off to the pub between runs. I’ve always been stuck doing experiments which last 20-30 minutes per shot. Normally you try to get a team of three or four people to work in shifts, through the night you survive on machine coffee, cantankerous vending machines and possibly loud music. You try to do data analysis as you go, to make sure nothing is going wrong and to help pick which samples to run next. These are one-off research machines, so the data analysis process may be a bit convoluted, and not very user-friendly. 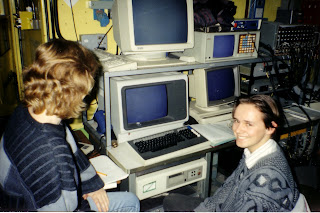 This is me looking really very boyish at the control station for the EXAFS machine, that’s the back of Sue’s head. Sue was a PhD student working in the same lab as me. 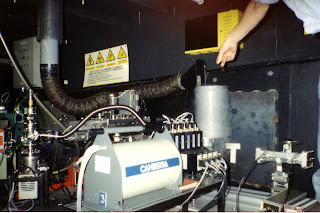 I’m pretty sure this is the EXAFS station I worked on, John is pointing at a polysytrene vessel containing liquid nitrogen (not quite sure why). John was another member of the research group. 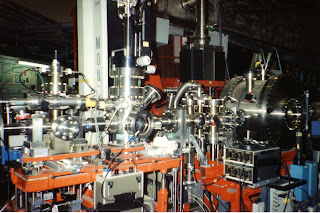 This isn’t the equipment I was using but see how shiny it is, how many bolts hold it together and how many unexplained protruberances it has. Who can but fall in love with such things?

All in all it was a rather exciting introduction to the world of research science. My rather small contribution to the measurement of cobalt ions in glasses (which were subtle shades of blue and pink) led to my first paper[1] in the scientific literature!

(Nuclear) magnetic resonance imaging is used for non-invasively looking at a person’s giblets and as such is really useful for doctors. Unlike x-ray imaging it is best for looking at squishy bits, x-rays are best used on bones.

The core of the technique is to put your subject in a VERY BIG magnet. The magnets used for medical imaging are typically 1.5Tesla or 3.0Tesla, this is hundreds of times the strength of a little bar magnet and approaching 100,000 times the strength of the earth’s magnetic field. A big nmr spectrometer will have a field of up to about 20T.

I’m not going to try explaining magnetic resonance imaging or nuclear magnetic resonance, the linked wikipedia articles look pretty good. It’s worth noting that you can make a good guess that someone is explaining nmr to a neophyte by the distinctive waving of their arms. nmr scientists seem inordinately fond of acronyms (DANTE, ADEQUATE, INADEQUATE, WEFT, NOESY, GRASE…) and I have the sneaking suspicion that they spend more time inventing their acronym than designing their experiment.

The idea with the mock magnet is that patients find the fairly confined space of the MRI machine a bit claustrophobic, but you can get them used to the idea using the mock magnet. Also if you’re doing experiments in the machine you can check your bits and pieces are going to fit in offline.

I enjoyed my time with the high field magnet, they’re clad in a shiny cryostat and they’re fond of ferromagnetic materials (like steel), this means they tend to stand alone in the middle of the lab. You can make the owner of a high field magnet very nervous by casually waving a screwdriver around in the presence of his “precious”. Even at a distance of 3metres a reasonable size magnet exerts a very noticeable pull. Once you’ve got the screwdriver stuck to the magnet it’s rather difficult to remove. Have a look on YouTube for a whole pile of videos on introducing metal objects to MRI machines.

Magnetic resonance imaging is a development of chemical shift nuclear magnetic resonance (nmr) spectroscopy, which has been keeping chemists happy for years. People are inordinately scared of the word “nuclear”, so for presentational reasons the “nuclear” is dropped from the name of the imaging technique.

An exciting aspect of nuclear magnetic resonance (and other areas involving big magnets) is the “magnet quench” phenomena, this is the problem that has caused so much trouble at CERN recently. High field magnets work by putting a large current (tens of amps) into a superconducting coil (or solenoid). The superconductors used in magnets have to be cooled by a combination of liquid helium (really cold) and liquid nitrogen (not quite so cold, but cheaper). Whilst superconducting, everything is fine – the current can flow for ever producing a magnetic field. However, if by accident or design, the superconductor stops superconducting then it heats up it’s liquid gas jacket, which vapourises potentially very rapidly. Here’s another video of  a controlled magnet quench, featuring a pretty, shiny magnet. The first minute is best, the venting helium sounds like a strange musical instrument.

I’m idly wondering whether a magnetic resonance imager embodies the most Nobel Prizes of any device you’re likely to meet in everyday life. Heike Kamerlingh Onnes won the 1913 physics prize “for his investigations on the properties of matter at low temperatures which led, inter alia, to the production of liquid helium”. Bardeen, Cooper and Schrieffer got the 1972 prize for their theoretical work on superconductors. Lauterbur and Mansfield received the 2003 prize for medicine for the development magnetic resonance imaging. There’s a whole bunch of other nuclear magnetic resonance prizes, arguably you could include Marconi for his development of “wireless telegraphy”.

*Actually, they’re both the same – I couldn’t take pictures of the machines I saw.