Lords reform is looking quite dead, there is an outside chance that David Cameron is bluffing his 91 rebels – faced with the realisation that they may have just blow chances of a Tory win at the next election due to the loss of boundary changes, they may relent.

As for the boundary changes, I’m indifferent to them. In best case for Tories they address an imbalance in the electoral system for them which lost them the last election. To Liberal Democrats they mean nothing in a system which is grossly weighted against them. I believe the Tories may just get through the changes they want, the arithmetic is very tight and I wouldn’t put it past a group of Labour MPs to vote for on the grounds that they prefer kicking the Lib Dems to the Tories.

Labour’s behaviour has been laughable: this is a reform they say they believe in and yet they are happier to see it fall than vote with Liberal Democrats.  Talk of a “badly written bill” is simply the flimsiest of pretexts to vote it down, the Bill is built on the work that Labour did on Lords Reform and was extensively consulted upon. “Badly written” is code for “we’re voting against because we’re automatic opposition”.

As for freeing up time in parliament in order to legislate to boost growth – I don’t think even socialists believe that legislation will boost growth – Tories spouting it is outright surreal.

The Tories have violated the Coalition Agreement – the Liberal Democrats have not. There is no careful algebra of this being tied to that: it has been broken. Even over tuition fees the Lib Dems kept their side of the bargain – the Tories haven’t. Liberal Democrats now opposing boundary changes is straightforward retribution – you break an agreement, there is a punishment.

We often piously say at election time that people have died for us to be able to vote. I’ve said it myself. It is utter cobblers: no one died so an appointed house of cronies, party funders and has been MPs could Lord it over us. No one died so that 37% of a turnout of 61% could give one party absolute power.

When you see Lords Reform in Labour and Tory manifestos at the 2015 general election have a hearty laugh and ignore them.

This post is about the House of Lords register of members interests, an online resource which describes the financial and other interests of members of the UK House of Lords. This follows on from earlier posts on the attendance rates of Lords, it turns out 20% of them only turn up twice a year. I also wrote a post on the political  breakdown of the House and the number of appointments to it in each year over the period since the mid-1970s. This is all of current interest since reform is in the air for the House of Lords, on which subject I made a short post.

The values of these interests are not listed but typically the threshold value for inclusion is £500 except where stated.

The data are provided as webpages, with one page per initial letter there are no Lords whose Lord Name starts with X or Z. This is a bit awkward for carrying out analysis so I wrote a program in Python which reads the webpages using the BeautifulSoup HTML/XML parser and converts them into a single Comma Separated Value (CSV) file where each row corresponded to a single category entry for a single Lord – this is the most useful format for subsequent analysis.

The data contains entries for 828 Lords, which translates into 2821 entries in the big table. The chart below shows the number of entries for each category. 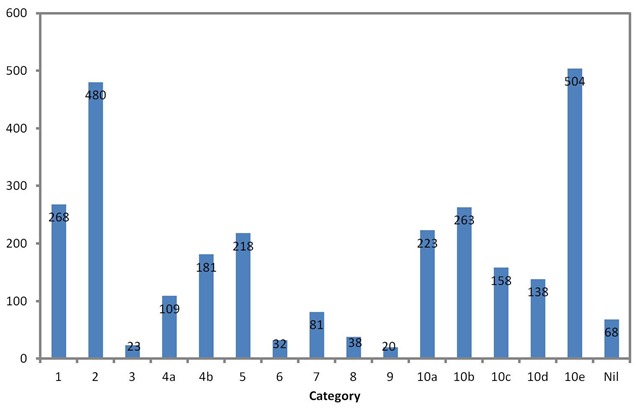 This breaks things down into more manageable chunks. I quite like the miscellaneous category 9, where people declare their spouses if they are also members of the House and Lord Edmiston who declares “Occasional income from the hiring of Member’s plane”. Those that declare no interests are split between “on leave of absence”, “no registrable interests”, “there are no interests for this peer” and “information not yet received”. The sponsorship category (6) is fairly dull, typically secretarial support from other roles.

Their Lordships are in great demand as officers and trustees of non-profits and charities, as indicated by category 10e, and as members on the boards of public bodies (category 10b).

I had hoped that category 2 would give me some feel for occupations of Lords, I was hoping to learn something of the skills distribution since it’s often claimed that the way in which they are appointed means they bring a wide range of expertise to bear. Below I show a wordle of the category 2 text. 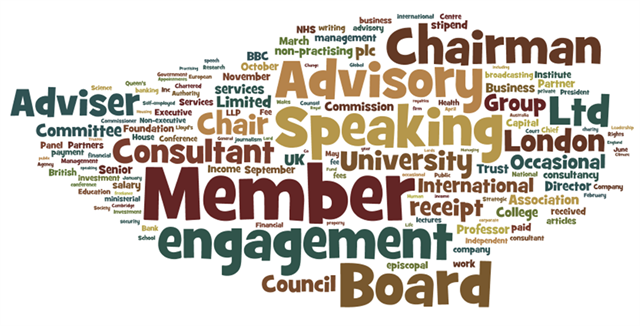 There’s a lot of speaking and board membership going on unfortunately it’s not easy to pull occupations out of the data. I can’t help but get the impression that the breakdown of the Lords is not that dissimilar to that of the Commons, indeed many Lords are former MPs – this means lots of lawyers.

You can download the data in the form of a single file from Google Docs here. I’ve added an index column and the length of the text for each entry. Viewing as a single file in this compact format is easier than the original pages and you can do interesting things such as sort by different columns or search the entire file for keywords (professor, Tesco, BBC… etc). The Python program I wrote is here.

At the 2010 General Election nearly 90% of us voted for parties enthusiastic for an elected House of Lords. The Conservatives said in their manifesto:

The Liberal Democrats said in their manifesto:

“Replace the House of Lords with a fully-elected second chamber with considerably fewer members than the current House.”

And Labour said in their manifesto:

“We will ensure that the hereditary principle is removed from the House of Lords. Further democratic reform to create a fully elected Second Chamber will then be achieved in stages.”

This is also reflected in the Coalition Agreement:

“We will establish a committee to bring forward proposals for a wholly or mainly elected upper chamber on the basis of proportional representation.”

The reasons for this unanimity is several-fold:

The Labour government made a start on House of Lords reform by removing the voting rights of all but 92 of the hereditary peers with an intention of moving to a House of Lords with a larger elected component. These subsequent changes ran into the sands of complex parliamentary procedures and an obstinate upper House.

The proposals put forward by Nick Clegg, backed by David Cameron, are for a second chamber containing 300 members elected using a proportional system based on large constituencies. The proposal is to elect one third of the house at each general election with members elected for 15 years but no possibility of re-election. The draft bill includes provision for 20% of the house to be appointed but there is a consultation with the option that the house be 100% elected.

These proposals are evolutionary: the legislative powers of the House of Lords remaining as now; an elected house is only attained after 15 years and the membership will only be 25% smaller than the current active membership.

I look forward to the parties at Westminster fulfilling their commitments to an elected second house!

The House of Lords by numbers

Reform is in the air for the House of Lords, to be fair reform has been in the air for large parts of the last hundred years. Currently reform comes in the form of a proposal put forward by Nick Clegg and backed by David Cameron – you can see the details here. It comes in the context of all three main Westminster parties supporting a largely elected House of Lords in their 2010 General Election manifestos.

The purpose of this post is not to go through the proposals in detail but simply to provide some charts on appointments to the House of Lords over the years. The current composition of the House is shown in the pie-chart below: 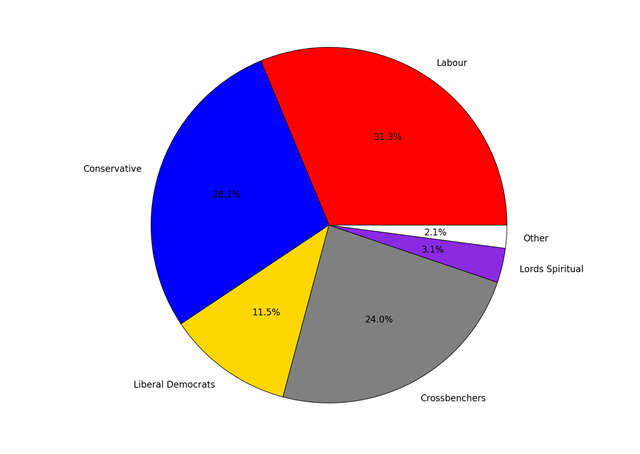 The membership of the House of Lords currently numbers 789, I have excluded the handful of members from UKIP, DUP, UUP, the Greens and Plaid Cymru since they are too few to show up in such a chart.

The website www.theyworkforyou.com provides a handy list of peers in an easily readable format, this list includes data such as when they were appointed, what party they belong to, what name they have chosen and when they left and whether they used to be an MP. We can plot the number of appointments each year: 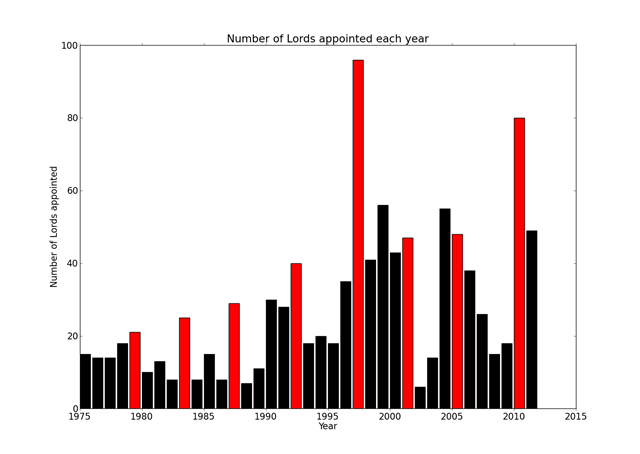 I’ve highlighted election years in red, as you can see election years are popular for the appointment of new members, and it would seem many of those appointed in such years are former MPs, as shown in the graph below: 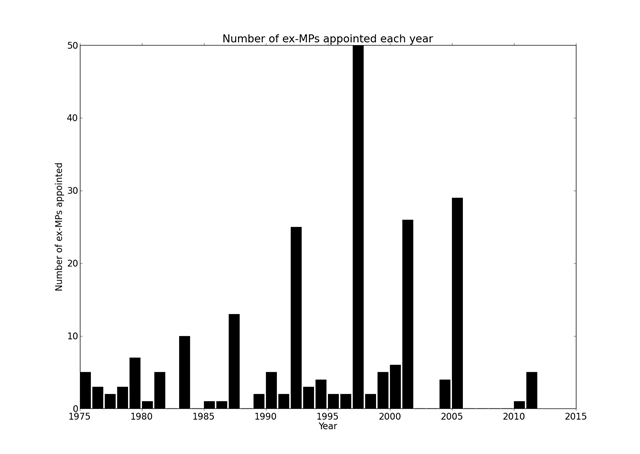 But to which parties do these appointees belong? This question is answered below: 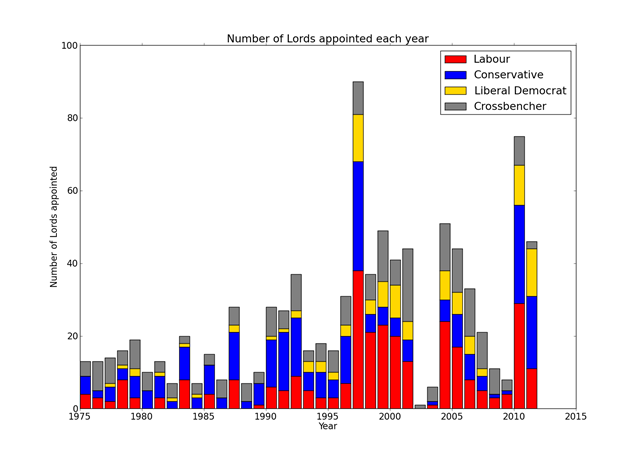 I hope this provides a useful backdrop to subsequent discussions on reform.

Poor attendance record in the House of Lords?

I know my readers love a chart, and today I found some data I thought was begging for a good graphing. It’s the attendance figures for the House of Lords found in a report entitled “Members Leaving the House” – found at the bottom of this article. The motivation for the report is to explore the idea of retirement for peers, something some peers are seeking regardless of any other changes taking place. A secondary motivation is that there is wider reform of the House of Lords proposed, and one of the issues is that the new House is envisaged, ultimately to have substantially fewer members – this type of discussion informs how that transition might be achieved.

The report contains a set of tables for the last five years indicating the fraction of sessions which peers attended broken down into groups: 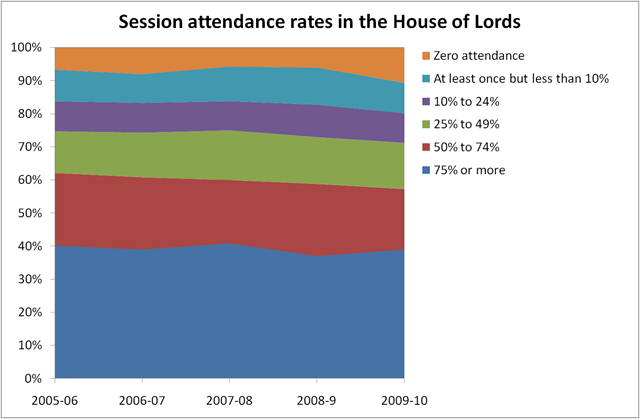 To give some idea of scale: across the period shown here the total number of peers decreased from 777 to 741, the average number of sessions in a year was 140, this latter figure means that a peer attending “less than 10% of sessions” was attending less than twice. It compares with the number of working days in the year of approximately 240 (48*5 day weeks). Nearly 20% of peers attend a session in the House of Lords only once or twice a year.

Being a member of the House of Lords isn’t a proper job, it does not attract a salary, although peers may claim a subsistence and office allowance of up to £26,000 per year. In this sense we should not anticipate the levels of attendance achieved by those working “normally”. Some of the peers will be paid as government or opposition working peers. However, peers do have a direct effect on the laws the country makes and turning up twice a year (which is all 20% of them achieve) does suggest a fairly low degree of interest – if I did something twice a year I wouldn’t even consider it a hobby, I go to the dentist more often!