I’m a Liberal Democrat. Our party president, Tim Farron, once described us being like cockroaches in our indestructability.

The writing was on the wall from the moment Nick Clegg and David Cameron stepped into the Downing Street rose garden in May 2010. Our opinion poll ratings plummeted from that moment, before we’d done anything else but form the Coalition.

The night had virtually no redeeming features. I particularly feel the loss of MPs like Lynne Featherstone, Jo Swinson and Julian Huppert all of whom made significant contributions in parliament on equality, science and anti-authoritarianism. All of whom appeared to be popular local MPs, all of whom were swept aside by the national tide.

Nick Clegg retained his seat, for which I’m rather pleased. Outsiders don’t realise quite how dependent a Lib Dem leader is on their party. The things Nick Clegg took the blame for were the things we as Liberal Democrats had collectively decided. He has been the one that has born the brunt of outrage against the Liberal Democrats with good grace. He is the one, more than any of the three main party leaders, who has talked with the public.

It will be remoulded by people like me who spend their spare time doing local politics: sitting in interminable meetings in their evenings, posting leaflets through doors, standing for local elections, helping local people and breaking out once every 5 years or so to fight a General Election.

I’m going to go back to trying to win seats at elections and making sure the liberal voice is heard.

There is a General Election being held in the UK today, along with local council elections in some parts of the country. The count will take place commencing at 10pm this evening, and the count will likely finish sometime around noon tomorrow.

Should you stay up awaiting all the results?

My advice is “no” but that’s because I’m getting old and like my sleep! My plan is to stay up for the BBC exit poll at 10:15pm and then go to bed, probably to awake with the dawn chorus at 4am.

If you do stay up then what can you expect? The Press Association list of estimated declaration times from here, they’re based on council estimates and previous declarations where the council provides no estimates. My experience is that the more interesting results are delayed beyond their estimated time.

As you can see from the chart below, aside from a scattering of seats, things start to pick up around 2am. Results start to pour in around 3am and by 7am it is all over bar a few stragglers.

If you want a more narrative description of what will happen and some anticipated milestones then The Guardian has a report (here). 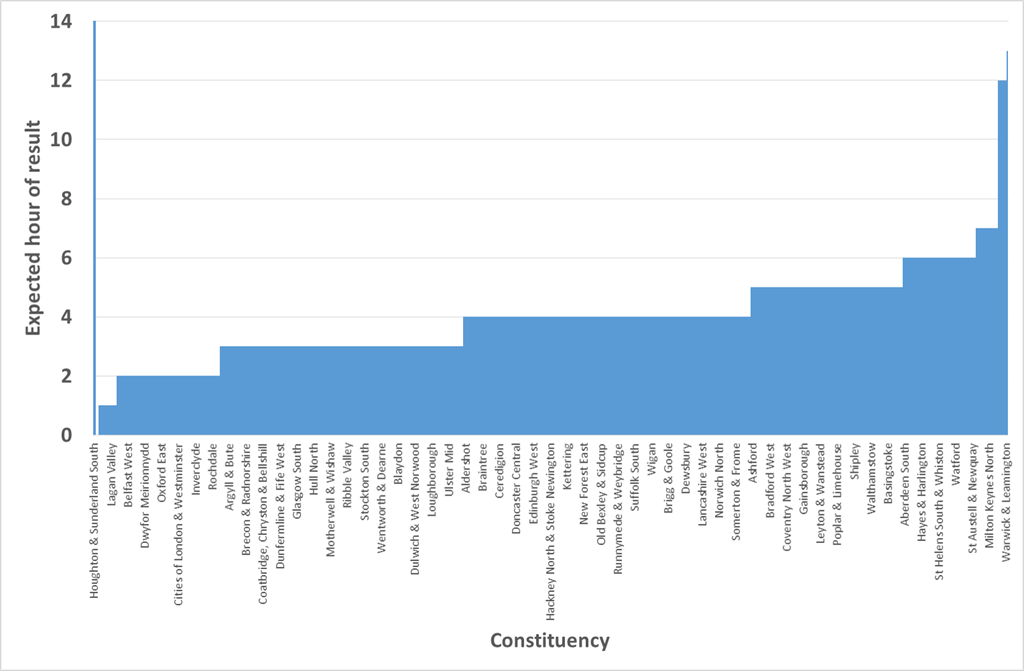 For the record, and for readability here is the complete list:

It’s difficult to call between Labour and the Tories as to who will have the most seats post election. The polls show a pretty much dead heat, and I don’t see either party making great gains or loses over the campaign. Labour have had a built in advantage which means that they get more seats for the same percentage of the vote as the Conservatives. It’s not clear if Labour’s “Scottish Problem” removes this advantage. My hunch is the Tories will do a little better than the polls are suggesting but both will have something around the 270 seat mark with Labour in the lead.

As a Liberal Democrat eternal optimism is something of of a pre-requisite. I joined the party when it had 22 seats and 22% of the national vote. I anticipate we’ll still get more than that after this election. I’m holding out for about 40 which is in excess of what pollsters predict. My reason for this optimism is that Liberal Democrat votes are local votes, and once in place Liberal Democrat MPs are difficult to dislodge, basically because they do a good job for their constituents (see here).

The most interesting thing will be the SNP. I’m finding it a bit difficult to believe the predictions of an SNP landslide in Scotland, perhaps erroneously. My thinking is that they lost the independence referendum by some margin outside the central belt. It’s possible that the rise of the SNP vote represents a wider disaffection with Labour, not seeing them as representing Scottish interests in Westminster. I’m really struggling to believe they will exceed 50 seats but this is my biggest opportunity to be really wrong. Dropping the SNP seat count will benefit Labour.

UKIP will get nowhere, I actually have a bet with someone that they will have no further MPs beyond the two they currently have by defection. I anticipate they will poll relatively highly (i.e. above 10%), similarly the Greens who I don’t think will get a further seat. I suspect many will be jolly glad that UKIPs votes don’t convert into seats, perhaps fewer will be pleased when the same thing happens to the Greens for the same reason.

The likelihood is that no one party or even pair of parties (aside from Labour and Tory) will have sufficient seats to form a stable coalition. The key interesting thing is whether SNP or Liberal Democrats will have sufficient seats to make a coalition government, or at least a confidence-and-supply government with either Labour or Tory. It’s difficult to see the Liberal Democrats going for another round of coalition with the Tories with any enthusiasm, I see a fair chunk of the party being happy to try it with Labour. I’m not sure Labour will want coalition, they appear to have ruled it out absolutely with the SNP.

A Labour – SNP coalition would very definitely not be what we voted for, no English or Welsh voter could have voted for the SNP. The SNP is standing no candidates outside of Scotland. The party leader, Nicola Sturgeon, is not standing for a Westminster seat. The votes SNP MPs make in Westminster will often not effect their constituents, only those of English and Welsh constituents (see here). The SNP has shown little interest in matters south of the border other than to blame the English for all their woes, and to ensure that English students in Scottish universities pay English levels of fees whilst Scots, and indeed students from the rest of the EU, don’t. Not a happy guide as to how they might treat English interests in future. I can see a Labour-SNP coalition being quite damaging for Labour since I can imagine both Tories and Liberal Democrats will make a great deal of this lack of mandate.

Left thinking people, on the whole, appear happy with the electoral status quo. And so too do the Conservatives, the clue is in the name. But truly the Westminster system is broken, the Scots benefit from a fair degree of independence from Westminster with elections held using proportional systems at both local and national level. The rest of the UK could do with the same.