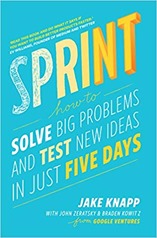 Sprint: How to Solve Big Problems and Test New Ideas in Just Five Days by Jake Knapp with John Zeratsky and Braden Kowitz is another book in my business oriented stream of reading.

The sprint is a 5 day programme for planning and running a consumer test of a prototype, starting on Monday with the consumer test on Friday. The programme is laid out in huge detail, even lunch times and break times, with suggested menus are proposed and a maximum size for the sprint team of 7. It is something of the spirit of a “sprint” in the Agile sense but not the same thing.

The book arises from the authors’ experiences at Google Ventures, a venture capital firm, and their work with startups for the most part. I suspect this has a bearing of the cited success of the process, startups are typically compact organisations and typically at the beginning they really need to get something in front of customers. This looks like a great way of doing that, I can see it being more challenging in a mature organisation. Knapp does provide some examples from more mature organisations as well, and mentions at the end that college lecturers have adapted it for courses.

Knapp sets up the sprint as being in contrast to a conventional brainstorming session where everyone has an equal say and no idea is too stupid. The drawback of the brainstorming method is that typically a huge number of ideas are generated in the session, many of questionable quality and then nothing happens afterwards.

Sprint is strong on the idea of a Decider, someone that will make the ultimate decision at points through the programme. The Decider is typically someone like the CEO but if the CEO can’t be available all week then they can delegate to someone else. The Decider can be influenced by spot-votes of other participants but they have the casting vote. Spot-voting is when participants indicate preferences by places sticky spots on items. The higher level implication of the Decider is that there is someone committed to the sprint who has the power to make things happen after the sprint has happened.

The five days of the Sprint are as follows:

The prototype is planned out as a storyboard of around 15 frames which represent the screens someone might see on a website or app as they conducted the core task. The key initial frame might be a fake news article linking to the prototype website.

The prototype is typically implemented as a facade, it is a fake of a website or app built largely in Keynote (Apple’s presentation software). Initially I bristled at this since my special skill is building fairly functional prototypes in short-order but even I would struggle to do that in one working day. Knapp provides a few of examples where the prototype is something else, they worked with a health clinic in the US which tried out a family friendly clinic arrangement in one of their existing clinics, a pump manufacturer who made the a sales brochure for a new pump rather than a model pump and a robotics company who had the majority of a prototype hotel delivery robot already built.

The commitment of time is large, attendees are expected 10am-5pm all five days, actually 9am-5pm on Friday. There is some scope to allow the Decider to make appearances intermittently, and Monday includes an “Ask the experts” session where outsiders can be brought in for 30 minutes or so. I can see in a larger company that it would be hard to carve out the required time. Also in a larger company it is unlikely you would get a genuine Decider on board, the output of the sprint process would go into competition with other priorities.

The book finishes with a summary of the 5 day programme, a shopping list – indicating the exact number of packs of Post-It notes you should provide and same questions and answers. To a degree I like this, these are my type of people but I can imagine for many the level of detail, control will be oppressive.

Sprint is a quick and easy read, it is chatty in style and is littered with little stories from sprints Knapp and his team have taken part in. I’m probably not in a position where I’d be able to implement the sprint programme in its entirety but provides a lot of food for thought, little ways of changing things.

This is a review of 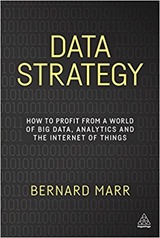 Data Strategy by Bernard Marr. The proposition of the book is that all businesses are now data businesses and that they should have a strategy to exploit data. He envisages such a strategy operating through a Chief Data Officer and thus at the highest level of a company.

It is in the nature of things that to be successful you feel that you have to be saying something new and interesting. The hook for this book is big data, or the increasing availability of data, is a new and revolutionary thing. To be honest, I don’t really buy this but once we’re over the hook the advice contained within is rather good.

This first benefit of supporting business decisions is further sub-divided into data about the following:

The chapter on supporting business operations contains quite a lot of material on using sensors in manufacturing and warehouse operations but also includes fraud detection.

Subsequent chapters cover how to source and collect data, provide the human and physical infrastructure to draw meaning from it and some comments on data governance. In Europe this last topic has been the subject of enormous activity over the past couple of years with the introduction of the General Data Protection Regulation (GDPR) which determines the way in which personal information can be collected and processed.

Following the theme of big data, Marr’s view is that the the past is represented by data in SQL tables whilst the future is in unstructured data sources.

My background is as a physical scientist, and as such I read this with a somewhat quizzical “You’re not doing this already” face. Pretty much the whole point of a physical scientist is to collect data to better understand the world. The physical sciences have never really had a big data moment, typically we have collected and analysed data to the limit of currently available technology but that has never been the thing itself. Philosophically physical sciences gave up on collecting “all of the data” long ago. One of the unappreciated features of the big detectors a CERN is their ability to throw away enormous quantities of data really fast. If you have what is a effectively a building sized CCD camera then it is the only strategy that works. This isn’t to say the physical sciences always do it right, or that they are directly relevant to businesses. Physical sciences work on the basis that there are universally applicable, immutable physical laws which data is used to establish. This is not true of businesses, what works for one business need not work for another, what works now need not work in the future.

Reading the book I kept thinking of A computer called Leo by Georgina Ferry, which describes the computer built by the J. Lyons company (who ran a teashop and catering business) in the 1950s. Lyons had been doing large scale data work since the 1920s, in the aftermath of the Second World War they turned to automated, electronic computation. From my review I see that Charles Babbage wrote about the subject in 1832 although he was writing more about prospects for the future. IBM started its growth in computing machinery in the late 19th century. So the idea of data being core to a business is by no means new.

The text is littered with examples of data collection for business good across a wide range of sectors. The Rolls-Royce’s engine monitoring programme is one of my favourites, their engines send data back to Rolls-Royce four times during each flight. This can be used to support engine servicing, and, I would imagine, product development. In the category of monetizing data American Express and Axciom are mentioned, they provide either personal or aggregate demographic information which can be used for targeted marketing.

Some entries might be a bit surprising, restaurant chains in the form of Dominos and Dickey’s Barbeque Pit are big users of data. Walmart also makes an appearance. This shouldn’t be surprising since the importance of data is a matter more of business scale than sector, as the Lyons company shows.

Marr repeatedly tells us that we should collect the data which answers our questions rather than just trying to collect all the data. I don’t think this can be repeated too often! It seems that many businesses have been sold (or built) Big Data infrastructure and only really started to think about how they would extract business value from the data collected once this has been done.

Definitely thought provoking, and a well-structured guide as to how data can benefit your company.