Book review: Index, A history of the by Dennis Duncan

The year started much in the manner of 2020 with Thomas, now aged 9, going back to school for a single day before returning to home schooling because of the covid pandemic. Despite this he’s doing well, surprising his RE teacher by explaining what omnipotent and omniscient meant! In the Autumn term his class had a covid outbreak which he managed to dodge despite sharing a table with three of the infected. Sharon and I have both been vaccination three times.

We managed to go on holiday to Anglesey on the hot week at the beginning of the summer, much time spent on the beach and we all got a bit sunburnt. We also travelled down to Dorset to see my mum in October- the first time we have seen her in over two years. We stopped off at Stonehenge on the way, it is the first time I remember visiting Stonehenge, I probably did as a child since I grew up only an hours drive away. Things have changed at Stonehenge since I was young, you used to approach by parking at a visitor centre and crossing under a main road but now the road has been closed and grassed over and the visitor centre has been moved away so you approach by a half hour walk which reflects the approach our prehistoric ancestors are though to have made. 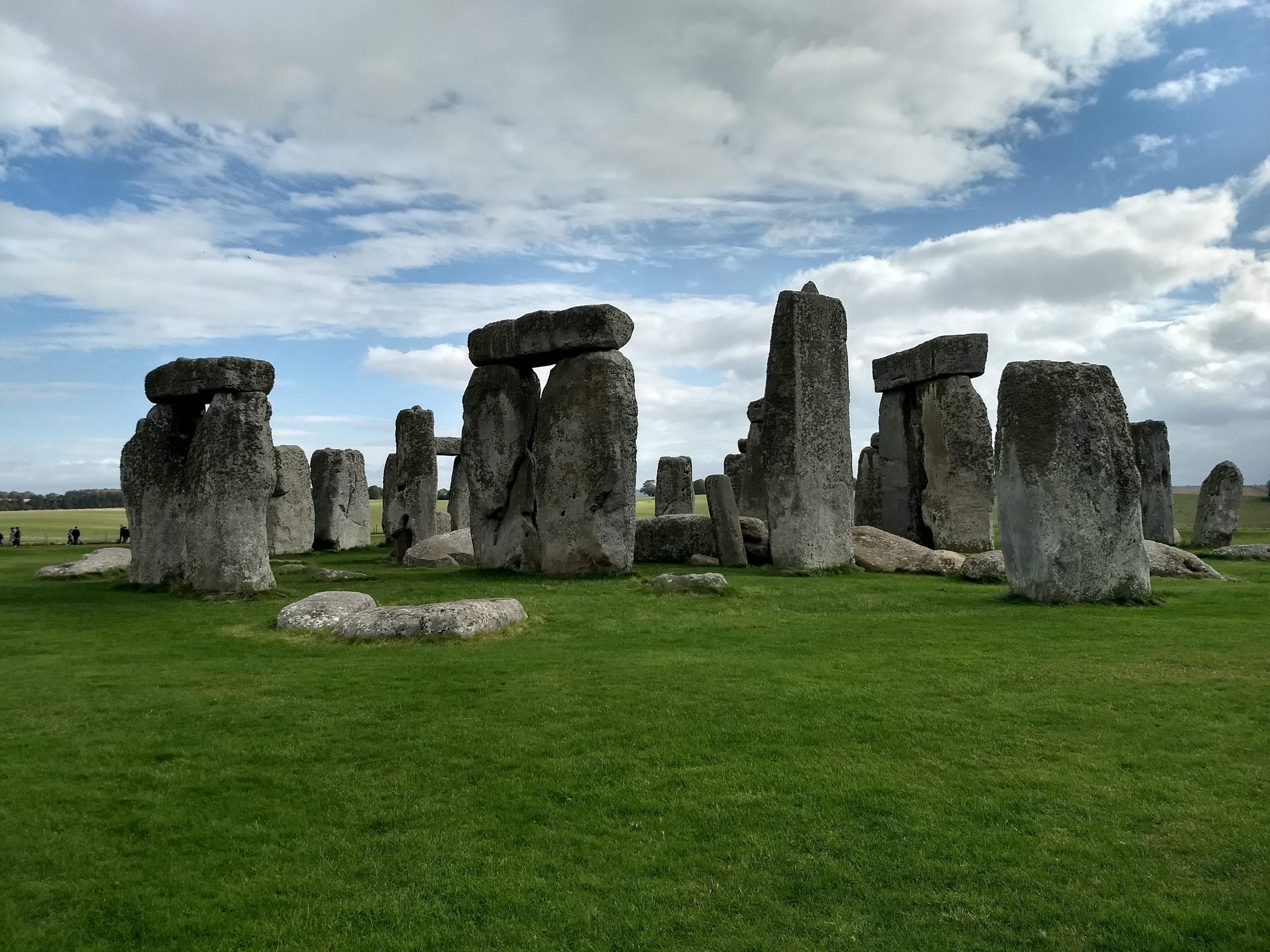 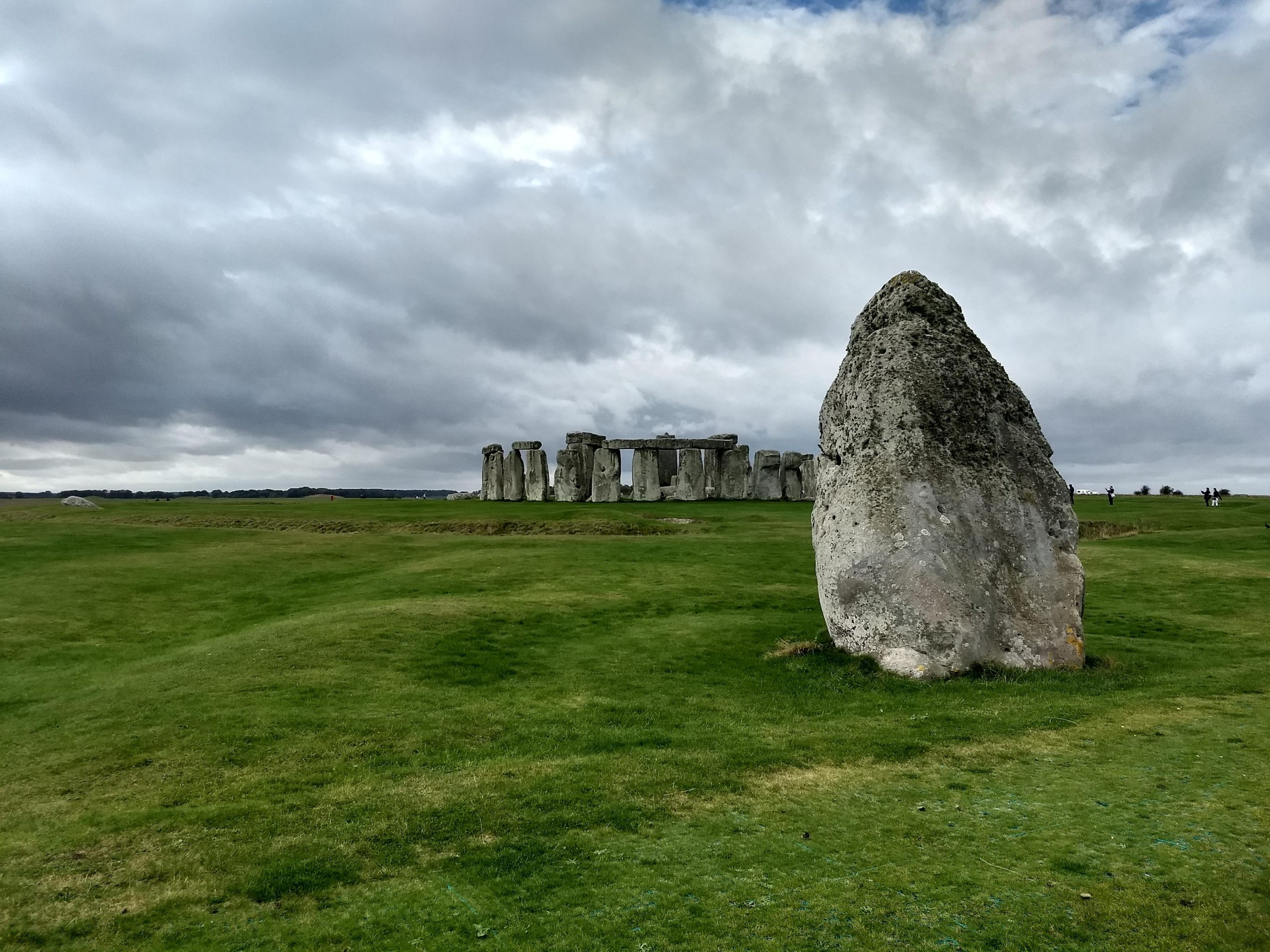 Overall we rather enjoyed the experience, it felt like a bit of a pilgrimage and once we got to the stones it didn’t feel too busy.

In domestic news we now have two new cats, Lily and Michelle – adopted from Warrington Animal Welfare which incidentally has a fine view of the Warrington Transporter Bridge. We adopted our previous cats, Bill and Ted, when we moved to Chester in 2004, Ted died a few years ago and Bill disappeared, presumed dead in April. Lily (on the arm of the chair below) is three, and her daughter Michelle is 8 months old – its a bit of a novelty having young, playful cats again. Unlike Bill and Ted, Lily and Michelle actually use the cat beds and cat tree we have generously provided, they have not tried to dig their way out of the lounger where they are currently largely confined (looking at no cat in particular, Ted). 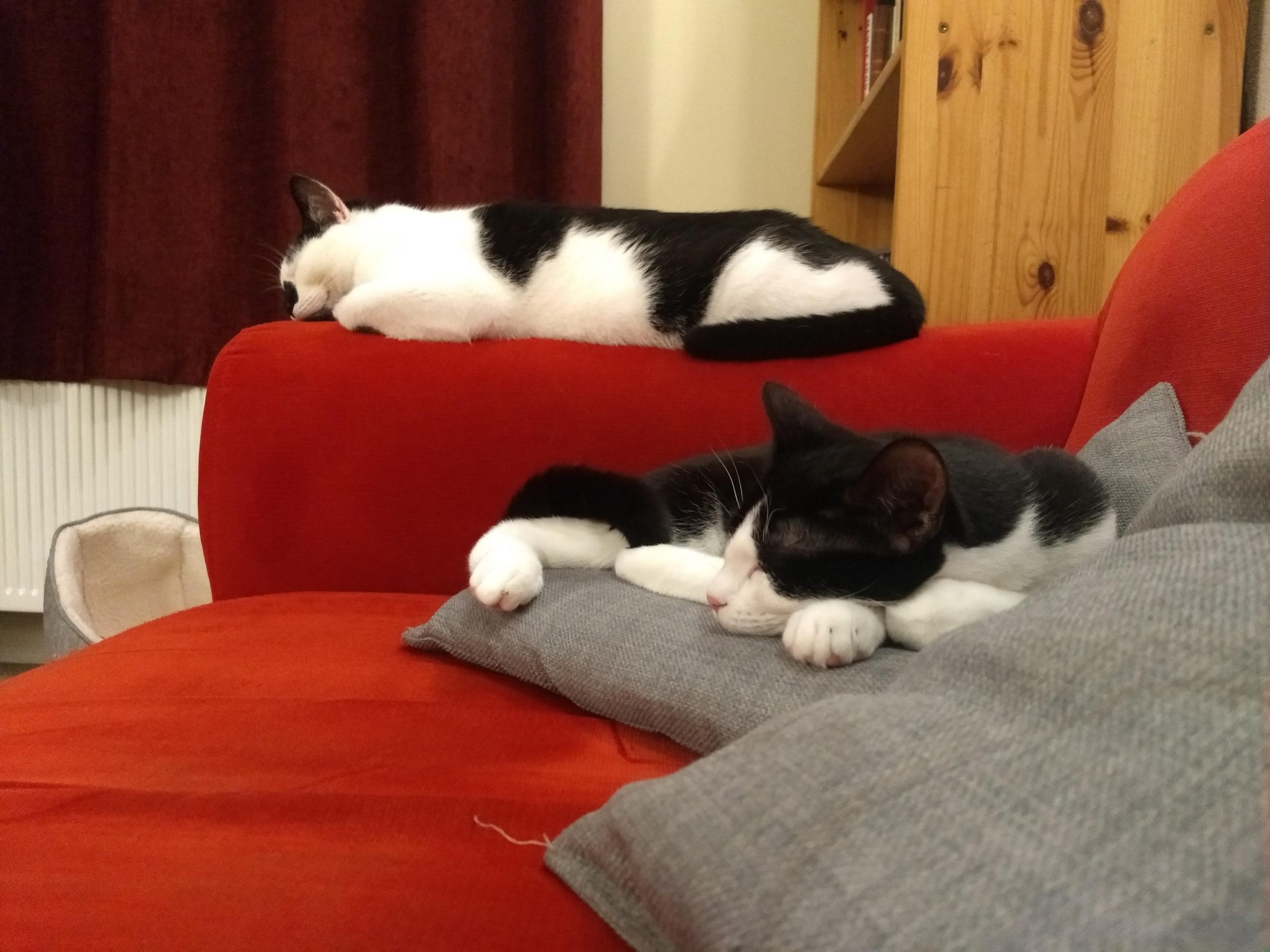 For a while over the summer and autumn we had a trail camera setup in the back garden, this followed on from taking part in a hedgehog study run by Chester Zoo – they loaned us a trail camera to look for hedgehogs. None showed up until after we had returned the camera at the end of the study and bought our own! The highlights of our trail camera experiments were the evening a fox cub poked a hedgehog with their nose, and discovered it was prickly, and the tawny owl – an unexpected visitor for a suburban garden. We had quite a few foxes what looked like a family with three or four cubs – sometimes even showing up in the day time. And we have video proof that "yes, that is fox poo"! 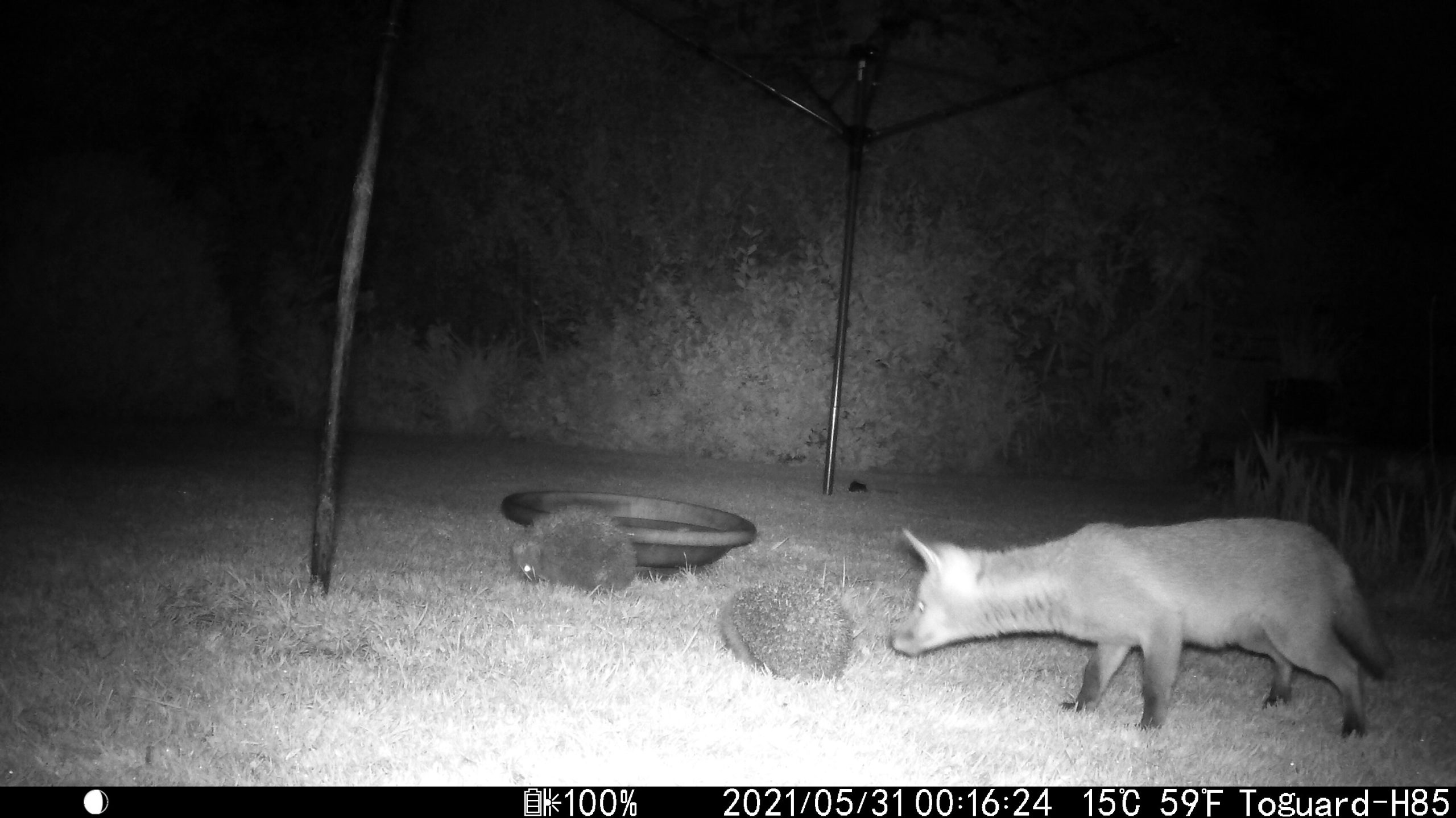 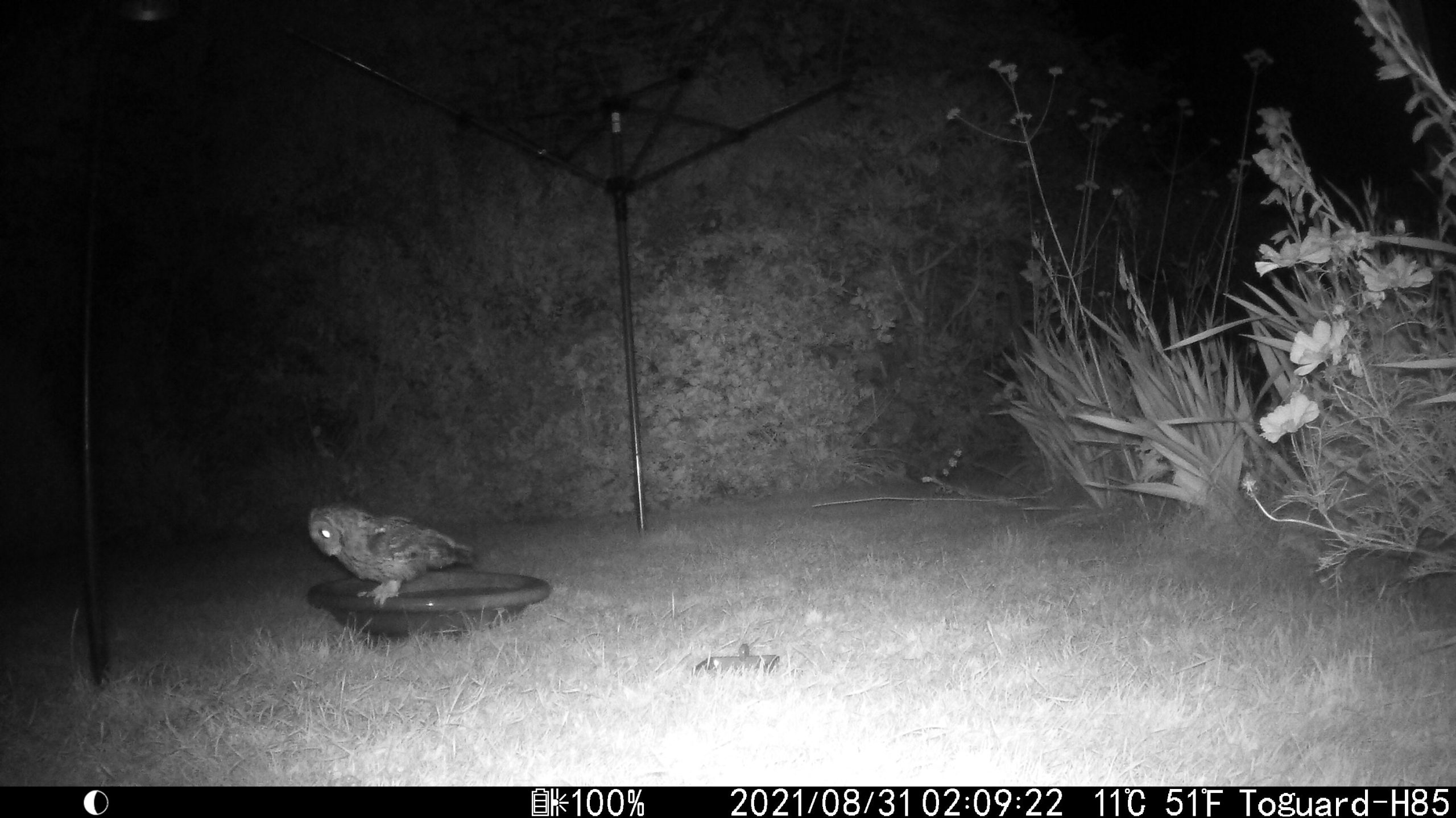 I started and finished the year with books where the media was the message with History of Britain in Maps by Philip Parker to start, and Index, A history of the by Dennis Duncan which was about indexes specifically but also something of the history of the book. I have learned that indexes have been used as both satire and fiction.

I read a number of guitar related books this year, Guitar Method – Music Theory by Tom Kolb, How to Write Songs on Guitar by Rikky Rooksby, Guitar Pedals by Rob Thorpe, Riffs: How to Create and Play Great Riffs by Rikky Rooksby, Guitar Looping – The Creative Guide by Kristof Neyens and related to this Audio Production Basics with Ableton Live by Eric Kuehnl. My favourite of these is How to Write Songs on Guitar by Rikky Rooksby which is a bit of a "bigger picture" book, and rather more book-like than the others. I still play guitar badly but I treated myself to a new guitar (a Gretsch G2622 Streamliner DC in Ocean Turquoise, see below), it is a modest step up price-wise on my Squier Stratocaster and I think this shows. 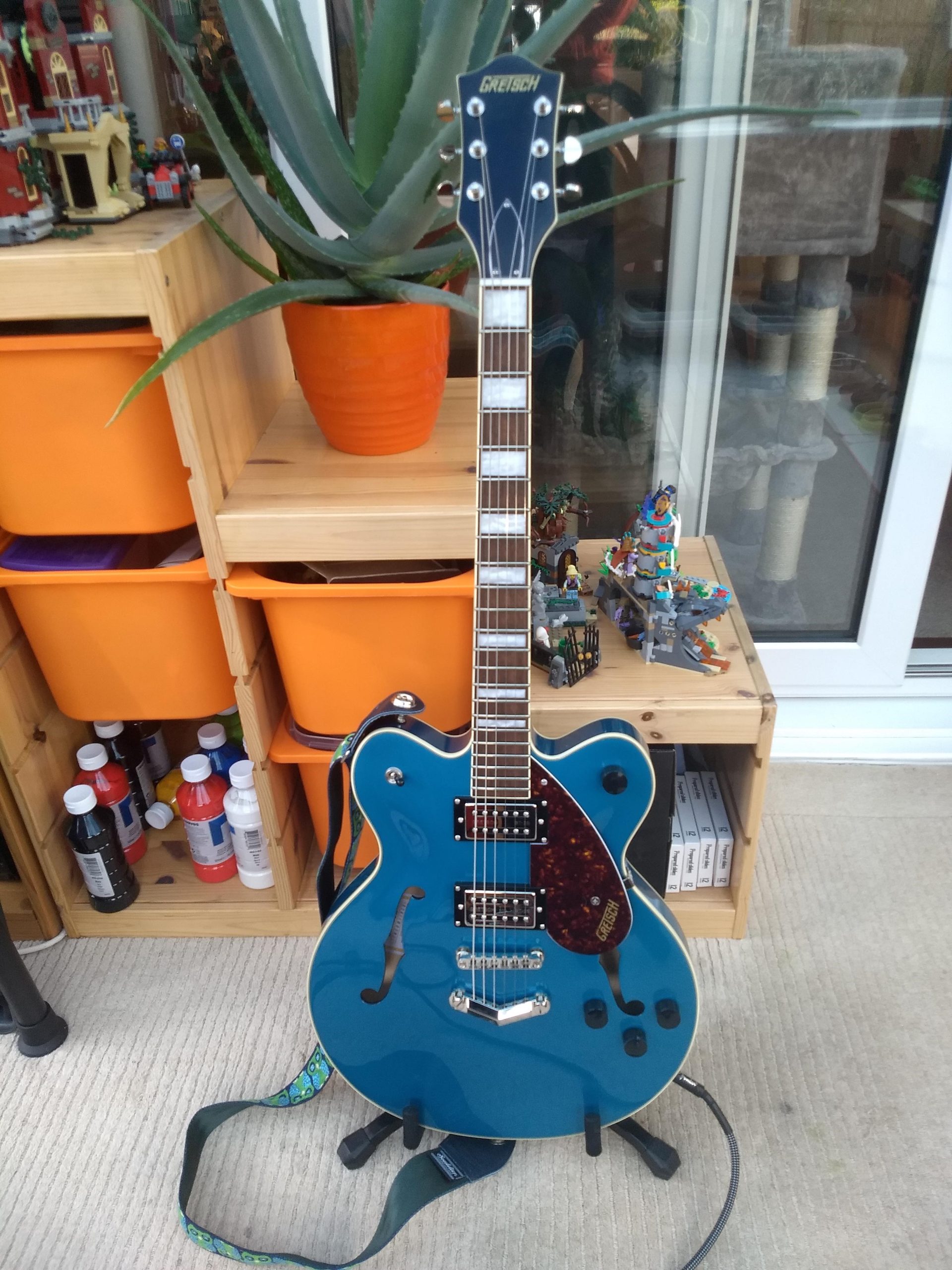 On the more technical side I read Exercises in Programming Style by Cristina Videira Lopes which I really enjoyed, it shows the same program written in 33 different styles, all in the Python programming language. I also read Data Pipelines with Apache Airflow by Bas P Harenslak and Julian R De Ruiter, as well as writing a blog post on Python Documentation with Sphinx.

My history reading tended more towards the prehistoric with Hidden Histories by Mary-Ann Ochota which talks mainly about Prehistoric British landscapes, The Goddess & The Bull by Michael Balter – about Çatalhöyük one of the oldest settlements in the world, and Ancestors by Professor Alice Roberts – about prehistoric British burials.

On the Black Lives Matter front I read Why I’m no longer talking to white people about race by Reni Eddo-Lodge, Precolonial Black Africa by Cheikh Anta Diop, and Empireland by Sathnam Sanghera.

There were a couple of natural history books, Entangled Life by Merlin Sheldrake about fungus and Much Ado About Mothing by James Lowen, about moths. Sort of related since it pertains to the biological sciences was The Code Breaker by Walter Isaacson which is a biography of Jennifer Doudna, and the CRISPR gene-editing technology for which she won a Nobel Prize. And finally, Eye of the Beholder by Laura J. Snyder which is a joint biography of Johannes Vermeer and Antonie van Leeuwenhoek who were both born in Delft in 1632.

The year ends largely as it started with covid once again running wild in the UK, this time with the Omicron variant and we are unsure whether Thomas will return to school at the beginning of the year. Prospects are a little better because we now have a vaccine, and this seems effective against all variants although Thomas, as a 9 year old, does not receive any covid vaccinations.