Book review: Index, A history of the by Dennis Duncan 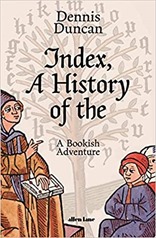 Duncan starts by talking about alphabetical order, and how it first came about – people have been writing their ABCs for approaching four millennia. The first catalogues or subject indexes date to the 3rd century BCE by Callimachus in the Great Library of Alexandria. The Greeks were more keen on alphabetisation than the ancient Romans. At this time writing was in scrolls, so there were no page numbers – making indexing somewhat difficult. An interesting language aside, the Greek "sittybos" was a parchment tag used to indicate the contents of a scroll from which we get the word syllabus, index is the Latin word for the same thing.

The next phase of evolution of the index was driven by the Church during the Middle Ages. Monasteries and nunneries valued reading, and the pope decreed that cathedrals should teach in 1079 which led to the creation of universities. The codex (essentially a book) had displaced the scroll as the primary format for writing by 600AD. Reading and teaching, and preaching, led to a need to find specific parts of large volumes of text hence the index.

The Bible was divided into chapters around 1200, verses were added in 1550. This is important because in the age of the handwritten manuscript pagination is variable – chapters and verses are a substitute for page numbering. Distinctios were created which drew together Bible references to make a theme for a sermon as well as more complete subject indexes, and word indexes.

A word index, or concordance, lists every occurrence of each word in a document. Here we are seeing the struggle to find the right size for an index, a concordance is too big, a table of contents, a sort of index, is not big enough. Hugh at the Dominican friary of St  Jacques in Paris produced the first concordance of the Latin bible in around 1230. The subject index is in between the concordance and table of contents in size but finding the right size is a job for skilled humans to this day.

At the same time as the Bible was being indexed and concordance-d Robert Grosseteste was creating a great index which spanned multiple books. It is always a bit difficult to determine whether historical figures have been enormously before their time, or whether an author is casting that historical figure with the present very much in mind. This struck most firmly with Grosseteste’s great index which looks to us very much like Google’s index of the internet.

Although there were a couple of experiments with page numbers on manuscript pages prior to the invention of the printing press in around 1440, it was a while before they were commonplace. Page numbers are a bit awkward to print because they fall outside the main body of the text, so there was some experimentation with using the folio marks used by the printer to compile a book properly. Sometimes in the 15th century readers were instructed to write the page numbers into the index themselves!

A recurring theme is whether reading an index is "cheating", whether it takes away from the activity of reading fully a book. Duncan also cites Socrates’ Phaedrus where it is argued that speaking is superior to writing/reading. We see a similar argument today as to whether Google has replaced our ability to read. Thinking of my own reading of non-fiction, I don’t make much use of indexes but I do have an Evernote of books like this with page number references – as you can see here – I use them when writing these reviews, so in a sense they are my own index.

In the 17th century the index as satire was invented, it was a time when political pamphlets were all the rage, and a format was found for the satirical index. I was entertained by the story of William Bromley, and the election to Speaker of the House in 1705. Just prior to the election his enemies published an index of his travelogue Remarks in the Grand Tour which cast him in a poor light, highlight errors of fact, statements of the obvious and hints of popery. He subsequently lost the election.

A genre I’d never seen before is the fictional index, that is a work of fiction which features a fictional index or even a work that is entirely a fictional index such as Nabakov’s Pale Fire or The Index by JG Ballard. Erasmus started this in 1532. Although there were experiments with indexing fiction, ultimately these never really took off.

Universal indexes in the manner of Grossetestes’ made something of a return in the 19th century, with Jacques-Paul Migne’s collected works of the Church Fathers. Later in the century there was an abortive attempt to index everything stemming from J. Ashton Cross’s presentation to the Conference of Librarians in 1877. A longer lasting effort was William Poole’s An Alphabetical Index to Subjects Treated in the Reviews and Other Periodicals perhaps this worked because its scope was smaller.

The final chapter covers the impact of computers on indexes, so far computers have been more dumb companions rather than creators in making indexes. They are able to generate concordances very quickly but even the best software struggles to identify appropriate subjects: what to index and what not to index. The problem is that computerised search provides and adequate index, so publishers are less inclined to spend money on an index – which is a separate, specialised activity to the authoring of a book.

I was worried that a history of the index would be a bit dull but I really enjoyed this book.