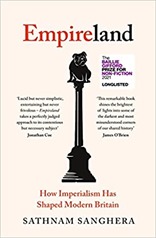 A return to reading about race with Empireland by Sathnam, subtitled How Imperialism Has Shaped Modern Britain. I think the best way of thinking about this book is as a perspective on the British Empire and its impact on present day Britain by a British Sikh. Although the coverage is global there is a focus on India, which reflects Sanghera’s background. I’m used to reading history by white British or American authors, so this is a refreshing change.

The signs of Empire are all around us, not least in the multicultural, multi-ethnic society we find in Britain which impacts our food, our religious observances and our art. A range of quintessentially British companies had their origins in the trade with India such as Shell who originally sold shells from India! Or Liberty original founded for the India trade. There are also a range of processed foods which were developed for the empire, to remind the colonists of home or taken up following colonial origins (rum, pale ale, madeira, gin and tonic). There is some argument that our welfare state had its origins in Empire, in providing "men fit to fight" which was a concern after the Boer War. We also borrowed a significant number of words into English from the empire: bungalow, shampoo, zombie, toboggan…

The Empire, and Imperial history is not clear cut, there are two very broad phases – the American and contemporary phase and the 19th century India and Africa phase. The Empire was not the result of a strategic plan, or governed in a unified manner, in contrast to the Roman Empire. As John Robert Seeley said: "We seem, as it were, to have conquered and peopled half the world in a fit of absence of mind". It seems also that the Empire was not front of mind for the British public for almost its entire span, in the days before a global media with relatively few British people involved with the Empire in Britain or even in the Empire this is perhaps unsurprising.

A recurring theme is how British actions in the empire were criticised at the time, on issues like the Jallianwala Bagh massacre, and the looting of Tibet. Key figures in the Empire, like Robert Clive and Cecil Rhodes were similarly criticised. The rehabilitation of Edward Colston is a case in point – he was not greatly celebrated during his life and the subscription to raise his statue some 200 years after his death was not filled. It is only with the recent en-harbouring of his statue that he has gained support. History that seeks an unalloyed positive view of the Empire just isn’t history.

Looting gets a whole chapter of its own, it focuses on the case of Tibet which was invaded by the British in 1903/4 – interestingly the invasion was commonly referred to as the "British Expedition to Tibet" or the "Younghusband expedition to Tibet" – note the rather passive language. It is clear that looting was seen as part of military operations and was formalised. There is a degree of greyness in the process since troops were on occasion censured for looting, and there were budgets for the purchase of artefacts. However, there were clear processes for the handling of artefacts looted during invasions and the sums set aside for purchasing artefacts were completely incompatible with the amount of loot returned to Britain. In Africa human body parts were taken by British soldiers as trophies, something which caused disgust in Britain at the time.

The sad thing is that most of the looted artefacts in British museums are not actually on display, and in the more distant past they were scarcely valued at all. Sanghera points out that the British establishment finds it impossible to return looted artefacts from British museums to their rightful homes but has quite the opposite attitude to people with established lives and families, as long as their skin is dark.

Immigration was often at invitation, citizens of the British Empire were just that but whilst white members of the Commonwealth have always had a welcome in Britain, those of colour have not. Conversely Britain has a large emigrant – outbound – population. It is part of the deal. Sanghera writes a bit about Britons abroad, the Brit transplanting their lifestyle to Spain is seen as a continuation of the colonial times.

Sanghera talks about racism and white supremacy in the British Empire. This is pretty explicit, the leading figures in the Empire were very clear that they saw the white British as superior and indigenous populations as naturally inferior, in need of the firm hand of white rule. White rule, sometimes meant massacre or even genocide, as was the case for the indigenous Tasmanian population.

Sanghera ends on a somewhat positive note, although Britain is not at the forefront, countries like Germany, France and the US have started talking about the return of looted artefacts, reparations for slavery, and some degree of contrition for their actions during their colonial period. The British government is trailing in this, although the public Black Lives Matters protests, and private initiatives to return looted artefacts, and discuss more frankly our troublesome past are taking place.

I think this was a useful step on my journey in understanding my country, and all the people that live here.