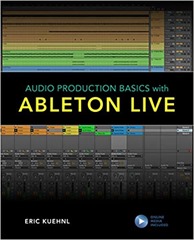 I started playing guitar a few years ago, and acquired an electronic drum kit a year or so later, as well as a keyboard and a ukulele. My wife has a bass guitar, and my son recently brought home a clarinet from school (in what can only be described as an act of war on the part of his teacher!).

I’ve been playing with computers for 40 years so it seemed natural to put the two things together, also I follow Paul David’s Guitar channel and when he came to talk about looping he skipped the whole looper pedal method and went straight to demonstrating looping in Ableton Live, a "digital audio workstation" (DAW). It turns out Ableton, and comparable products, are fearsomely complicated so being a bookish sort of person I bought Audio Production Basics with Ableton Live by Eric Kuehnl to work out how to use it.

The book starts with some introductory material on computers and storing files, which is a bit basic. Before talking a little bit about different DAWs, including selecting gear for your music studio. It turns out there are audio interfaces, MIDI instruments, MIDI control surfaces as well as microphones.

The introduction to the MIDI standard for communicating between music devices brought back memories for me, MIDI was invented in the early eighties when I was avidly reading computer magazines where I witnessed its inception.

For a long time audio production software, like Ableton, was very expensive but now it is much cheaper. I’m currently in the evaluation period for Ableton Live (a generous 90 days) but the introductory version is only £69. I’ve spent similar sums on a little MIDI controller and audio interface. I should probably get a decent microphone and stand, and now I’m coveting blingy MIDI control surfaces.

Finally we get on to the specific features of Ableton Live, about half way into the book! This is slightly unfair, we do get some glimpses before this. I found the book was good for structuring wider enquiry, one of the issues with a complex system like Ableton Live is not having the words to investigate (Google) further, and to be honest the problem once you have googled you are often faced with a screen-full of videos to watch. Audio production Basics gives you some of the vocabulary to ask useful questions, and I found reading it led me to grasping some important concepts. Also I discovered the videos Ableton make are very good.

For a long time I was confused because I thought that the Session View and Arrangement Views in Ableton Live were just that, views onto the same piece of audio data, but that is not the case. The Session View allows you to organise clips, often loops, sequence sets of clips together which you can perform live, with the option to record into an Arrangement view. It seems the Session View was originally the unique feature of Ableton Live, and is used on stage by performers.

The second useful concept is the Return Track, accessed for each channel using the Sends area of the control panel – you can see why it is tricky to come across the concept – it is called one thing in one place and another elsewhere. I suspect for people with a background in audio production the idea of Sends and Returns is commonplace. For a guitarist a Return Track is a bit like a pedal, you can route sound from each of your Audio/MIDI tracks through Return Tracks like Delay and Reverb.

Finally, if you search around the internet you’ll find a lot of beginners worried about how loud individual tracks sound. This has a couple of causes, sometimes it is because audio sources have not been processed by the audio interface correctly but often it is a misapprehension as to what the DAW does – it is not really a playback device. Individual tracks may sound quiet because ultimately they are going to be combined with a number of other sources, and if they were all "loud" then it would be overwhelming.

I have mixed feelings about this book, it takes a while to get onto Ableton specifics, and it feels like it doesn’t provide complete coverage. On the other hand working through the examples (something I rarely do) has introduced me to a lot of functionality, and is easier to my mind, than following Youtube videos.