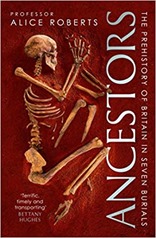 Somewhat unintentionally my next book, Ancestors by Alice Roberts, follows on from Hidden Histories by Mary-Ann Ochta and The Goddess and The Bull by Michael Balter. Ancesters is an investigation of the transition from early Stone Age people in Britain through the Neolithic, to the Bronze Age finally the Iron Age through the medium of seven burials around Britain. As well as the facts of various burials Roberts talks too about in archaeological methodology over time.

The broad context of the book is a project on recording ancient DNA in which Roberts is involved, a project on hold due to covid. Motivation for this is that we can observe the movement of ancient peoples and relationships between people in burials using DNA. These techniques have not been applied extensively to Neolithic remains to date.

The first burial discussed is of the "Red Lady" in a cave in the Paviland Cliffs on the Gower in Wales. It dates back to the Paleolithic (old Stone Age), 34,000 years ago and is the oldest burial discovered in Britain, from a period before the last Ice Age. William Buckland was the first to scientifically describe the burial, and his descriptions reflect the opinions of the time. He sought to reconcile such burials with biblical knowledge, and social mores, initially describing the burial as of a "Red Lady" because of the decorative grave goods (and the body being caked in red ochre). It turns out the burial is actually of a man!

As far as we can tell deliberate burials by homo sapiens date back about 100,000 years. The evidence is mixed as to whether Neanderthals practiced burials. This rubicon is seen as important since burial rites represent a move to modern human thinking which distinguishes us from other animals (so far!). I particularly enjoyed the description of the "flower people" where, in a burial in Iraq, it has never been quite clear whether Neolithic people buried people in flowers or whether it was actually the work of gerbils that, by the way, also gnawed on the body.

Returning to UK we meet Cheddar Man, who was buried after the last Ice Age about 10,000 years ago. Incidentally we learn how to wind up an anatomist with fake skeletons: in real life the pelvis and ribcage of a skeleton collapse because the ligaments don’t hold them together after they’ve been in the ground for a bit – fake skeletons don’t show this. At 14,700 years old other skeletons in Gough’s Cave, where Cheddar man was found, are the earliest post-Ice Age human remains found in Britain.

Cheddar Man was from the Paleolithic or old Stone Age, the next burials discussed are from the Neolithic or New Stone Age. The defining feature of the New Stone Age is the move from hunter/gathering to agriculture and settlement. The key question is whether this change in behaviour was a transmission of ideas, or an influx of people with these new habits. This transition to agriculture 11,000 years ago is one of the central themes of The Goddess and The Bull, in Britain the transition takes place a later – about 6,000 years ago.

Farming arrived in Britain with people, rather than just ideas. There’s evidence of violence in some of the burials discovered (about 10% of skulls show signs of traumatic injury) but as far as can be ascertained this was farmer/farmer violence rather than hunter-gatherer/farmer violence. It seems that hunter-gathering died out with its practitioners rather than its practitioners converting to farming. Something that I hadn’t heard of before was the idea of a "house burial" – some Neolithic burial barrows are on the site of dwellings, longhouses, which have been ritually burnt. Neolithic burial sites are often reused in the Bronze and Iron Age, perhaps to maintain contact with the land. Perhaps burial becomes more important once we start to stake a claim on particular pieces of land.

There’s a small diversion at this point to discuss Pitt Rivers, a 19th century archaeologist whose methodology was beyond his times in the sense that he made meticulous records of what he had dug. He was born Augustus Lane-Fox but changed his surname to Pitt Rivers as a condition of receiving a substantial inheritance. He spent his later years in detailed excavation of his inherited Rushmore Estate which lies close to Salisbury and is incredibly rich in archaeology (or perhaps if you are rich, an archaeologist and inherited a large estate it turns out there is a lot of archaeology you can do).

Next we move to Bronze Age burials, where things get exciting in terms of grave goods. Starting gently with some arrows and so forth we move on to whole, upright chariots including the horses in the Iron Age!! The Bronze Age is also marked by an influx of people. I recall from my Seventies childhood the Beaker People (identified by a particular type of pottery).

At this point, in the late Iron Age we transition from prehistory to history with Roman writings on Britain. Such records need to be treated with a little care since they are often second hand and are the viewpoint of a conqueror. It is interesting to see the names of Iron Age tribes carried forward to the present day, for example in the Parisi in Northern France (turning into Paris) and Durotriges turning into Dorset.

Roberts notes at the end of the book that burial practices don’t have to be universal across a period we consider to be discrete such as the Bronze Age, to the people living at the time they were not "Bronze Age" they were people of a much narrower place and time. Large changes in burial practices are not necessarily indicative of religious changes – Britain shifted from burial to cremation from the end of the 19th century to the Sixties with no change in religion.

The writing of the book stretched into the covid pandemic, it is an interesting mix of topics written in an engaging style. There are a couple of places where the editing slips a bit. Overall I found it an engaging read.