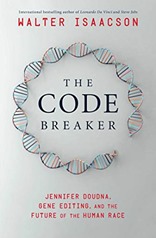 For my summer holiday reading I have The Code Breaker by Walter Isaacson, the author was recommended by a friend. It is the story of CRISPR gene editing, and Jennifer Doudna, one of the central characters in the development of this system and winner of the Nobel Prize for Chemistry in 2020 with Emmanuelle Charpentier for this work.

CRISPR is an acronym for "clustered regularly interspaced short palindromic repeats", a name derived from the DNA sequences that prompted its discovery. CRISPR are the basis of a type of immune system for bacteria against viruses. The CRISPR repeats form a fingerprint which matches the viral DNA and the associated system of enzymes allows a bacteria to snip out viral DNA which matches this sequence.

Whilst CRISPR is interesting in itself, it has applications in gene editing as a cure for disease in humans. CRISPR simply requires a short piece of RNA to match the target DNA in a gene to carry out its editing job. Short RNA sequences are easy to synthesise making CRISPR superior to earlier gene editing techniques. In addition there is potential to use CRISPR as a diagnostic tool for identifying infections such as covid and even as a cure for viral diseases. The Code Breaker does a good job of explaining CRISPR to a fair depth.

There is a section of the book on gene editing in humans and the moral issues this raises. Perhaps central to this is the story of He Jiankui, the Chinese scientist who led the work to carry out germ line edits to add a gene protective against HIV. Germ line gene edits mean editing the genes in an early stage embryo which means that all the cells in the child it gives rise to have the edit, including reproductive cells, hence the gene edit will be passed on to descendants. This is considered more radical than somatic cell gene editing where the changes stop with the person treated. I must admit to having some sympathy for He Jianku. Principally Western scientists had made a great show of considering the moral issues in germ line editing eventually deciding that the time was not yet right, but going against a moratorium or regulation in the area. This seems an ambiguous position to me, and the associated comments that Jiankui had done his work for publicity is a bit rich from a group of scientists who have been so competitive in the research over CRISPR. Jiankui conducted his research with the approval of his local ethics board but was subsequently disavowed by the Chinese authorities and then convicted.

Coronavirus is woven through the book because the work on CRISPR is very relevant here from a scientific point of view, and the key characters including the author are involved, as we all are! As far as I can tell Doudna et al have been involved heavily in conventional covid19 testing and have done research on CRISPR-based diagnostic tests which have great potential for the future – essentially they would allow any viral illness to be definitively tested at home (rather than a sample being sent off to do PCR test) – but are not yet used in production. Similarly there is the potential for CRISPR-based vaccines but these are not yet been deployed in anger. The Pfizer and Moderna vaccines are based on RNA but use older technology.

A chunk of the book covers the patent battles over CRISPR principally involving Doudna and her co-workers and Feng Zheng, scientist at the Broad Institute. The core of the patent dispute is how obvious the step from understanding the operation of the CRISPR system (which Doudna’s team demonstrated first) to applying it to human cells (which Zhang did first) is. I think my key learning from this part of the book is that I’m not very interested in patent battles! Tied up with the patent issue is the question of the great science Prizes which similarly give a winner takes all reward to a small group. The Nobel Prizes have a limit of three on the number of winners, so do more recently instituted prizes. Science simply isn’t done this way, and hasn’t been for a long time. There’s a group of at least a dozen scientist at the core of the CRISPR story and probably more, singling out a couple of people for a reward is invidious. It made me wonder whether the big science prizes are really about the prize giver rather than the winner.

The book is written in the more journalistic style that has arisen in scientific biography relatively recently, that’s to say there is a lot of incidental detail about where Isaacson met people and their demeanour than in older scientific biographies. I must admit I find this a bit grating, I’ve tended towards collective biographies recently rather than single person biographies which have a bit of a "great man" feel to them. However, I’m starting to make my peace with this new style – it makes science feel like a more human process, and makes for a more readable book. It’s fair to say that this is in no way a "great man" biography, although Doudna and her life and personality are a recurring theme other people get a similar treatment.