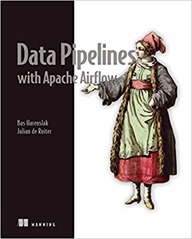 My next review is on Data Pipelines with Apache Airflow by Bas P Harenslak and Julian R De Ruiter. The book was published in 2021, and is compatible with Airflow 2.0 which was released at the end of 2020.

Airflow is all about orchestrating the movement of data from sources such as APIs and so forth into other places, it originated in Airbnb. It is designed for batch processing, rather than streaming data, and for pipelines that do not change much.

Data pipelines in Airflow are represented as "directed acyclic graphs" or DAGs which are defined in Python code using "Operators" which carry out tasks. A graph is a collection of nodes (tasks in this case) with "edges" between them. The "directed acyclic" bit means tasks have a definite order, the edges between them are "directed", and the graph cannot have loops or cycles because that would imply having to finish a set of tasks before you could start them. Simple data pipelines would just be a linear set of tasks that always follow one from another, a more complicated pipeline might bring in data from several sources before combining them to produce a final data product.

The Operators are strung together using expressions of the form "operator 1 >> operator 2" or even "[operator 1, operator 2] >> operator 3".

Operators do not have to use Python, they can invoke code in other languages such as the BashOperator, or interact with other systems such as databases or storage systems such as S3. It is relatively easy to write your own operators. Alongside operators that do stuff there are branch operators which select one or other path in the DAG, and there are also sensors which detect changes in filesystems and trigger work and hooks which form connections with external services. Dummy operators can be used to simplify the appearance of DAGs.

As an orchestration system the intention of operators is that they should not contain a great deal of code to process data, that function should be off-loaded to libraries or systems elsehwhere.

The Airflow system is comprised of a web server which allows you to observe / trigger execution of DAGs, a scheduler which is responsible for the scheduled running of DAGs and workers which do the actual work of the DAG. The Airflow system loops over the tasks defined in a DAG, and tries to execute tasks which depends on the tasks upstream of the task in question, if they have been successfully completed then a task can execute.

A basic implementation runs DAGs locally using a simple queue to schedule work, and a sqlite database to store metadata. A production implementation would use something like Postgres or Amazon RDS as the metadata store, schedule work using Celery and run tasks in Docker containers marshalled using Kubernetes.

For some reason reading this I was reminded that big projects like Airflow are just other people’s code, and if you look too carefully you’ll find something nasty. This is both comforting and mildly scary. I think the issue was that Airflow uses jinja templating to inject parameters into code which feels wrong but is probably a pragmatic and safe why to do it, these shenanigans are not required for Python operators. Also discussed are issues with code dependencies, which the authors suggest are best eliminated by putting operators into Docker containers each of which contain their own code dependencies – allowing otherwise dependency incompatible libraries to work together.

Alongside the material on Airflow there are moderate chunks on Python modules, testing, Docker and Kubernetes and logging so you get a well rounded view not only of Airflow but also of the ecosystem it sits in. The book finishes with deployment into various Cloud environments. I found these parts quite useful since the most complicated work I do in my role is trying to get things to work in AWS! The data science part is easy…

The book finishes with some short chapters on Cloud deployments, mentioning first fully managed services such as astronomer.io, Amazon MWAA and Google Cloud Composer before going on to talking about implementation of one of the demos in the book on AWS, Azure and Google cloud services. I considered skipping these chapters but they turned out be quite interesting in highlighting the differences between services and perhaps the preferences of the authors of both the book and of Airflow.

I found this a readable introduction to Airflow with some nice examples, and interesting additional material. Useful if you are thinking about using Airflow, or even if you are working on data pipelines without Airflow since it provides a good description of the moving parts required.

The code repository for the book is here: https://github.com/BasPH/data-pipelines-with-apache-airflow