Book review: The Goddess & The Bull by Michael Balter 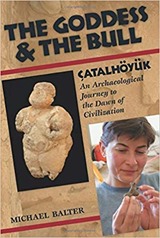 I like to vary my reading, so from my previous review on guitar riffs we go to Neolithic archaeology, specifically the archaeology of Çatalhöyük in The Goddess and The Bull by Michael Balter which carries the subtitle "Çatalhöyük – An Archaeological Journey to the Dawn of Civilization". Çatalhöyük featured in a recent TV programme "Raiders of the Lost Past with Janina Ramirez" which I recommend if it is still available – this is what prompted me to get this book.

Çatalhöyük, in Turkey, is a prehistoric township which was active between 7500BC and 6200BC, it reached a peak size of some 5000 residence and as such it notable for being one of the largest of the early Neolithic settlements.

The Goddess intertwines several themes, it provides some biographical detail of the key archaeologists involved in the dig, it talks a bit about the evolution of archaeological methodology, and it talks about what was found at Çatalhöyük and the wider human activity in the Neolithic period. This is laid out in chapters that proceed chronologically with each chapter mixing elements of biography, methodology and the Neolithic period.

Any story of Çatalhöyük starts with James Mellaart, the first archaeologist to dig the site in the early 1960s. It’s fair to say he was a bit of a character. When he arrived in Turkey in the 1950s the Neolithic remnants were little known and he discovered hundreds of sites in his tour, on foot, of the area. These were largely in the form of "tells", large mounds built of successive layers of settlement made one on top of another. Çatalhöyük stood out because it was large, and it was early Neolithic from top to bottom. Many of the tells were occupied over very long periods of time so the earliest archaeology was obliterated by the later.

After digs at Çatalhöyük between 1961 and 1965, Mellaart was banished by the Turkish authorities following accusations of facilitating the sale of archaeological artefacts. His case was not help by the "Dorak Affair" in 1958 in which a mysterious woman showed him a range of artefacts from the Neolithic which he dutiful wrote up in various articles – these artefacts never saw the light of a museum and the Turkish authorities suspected Mellaart in their disappearance. The mysterious woman has never been found. Over the rest of his life Mellaart continued to publish on Çatalhöyük, later articles becoming somewhat fanciful.

I found it striking how much of the archaeological work done in the Middle East was done by British, American and other Western European archaeologists, often with their own institutes in-country. It feels like a water-down version of the bad old days of the 19th century where Europeans pillaged the countries of the ancient world for artefacts, although it is clear these 20th century ventures were much more under the control of the "home" countries.

Also relating to politics, the book highlights how much modern archaeology is funded as rescue work, during the construction of roads and railways in the UK, and frequently dams and hydro-electric schemes in the Middle East. In the nineties phase of digging at Çatalhöyük, Ian Hodder, the director of the work, spent a lot of time fundraising from both public and commercial sources.

From a methodological point of view, Mellaart’s first archaeological digs were based on the vertical stratigraphic approach borrowed from geologists which had been made popular in the forties and fifties by Kenyon and Wheeler. Here layers of a site are stripped back successively to establish a chronology, aiming for depth rather than breadth. This replaced the 19th century approach of broad area excavation where discovering the horizontal extents of a site was the priority, as was the discovery of "treasure", I suspect. Following Mellaart’s excavation the "New Archaeology" arose which became the "Processual" movement in which the emphasis was on highly detailed digging and analysis with a view to testing hypothesis. Earlier schemes being more interested in cultural artefacts. In a nutshell, the processual view saw different forms of stone axes representing different uses, whilst the previous view saw different axes as representing different cultures.

Ian Hodder represented a further evolution in methodology, post-processualism which included the intensive specialist sampling of the processualists but added more context from sociology and anthropology, and even the subjective feelings of the archaeologists as they worked. Pierre Bourdieu, a French sociologist and a bête noire in our household, is mentioned! Hodder took over the excavation of Çatalhöyük in the earlier nineties, and continued through to the completion of this book in 2006, and beyond until 2017 when digging seems to have stopped at Çatalhöyük.

The core question around the Neolithic era was what made Palaeolithic hunter-gatherers settle and take up farming, and how did they do this. There is some evidence that settling, living in permanent villages occurred some time before farming started. But why did farming start? Why did settling start?

There isn’t really a conclusive answer to this. Çatalhöyük, as a substantial Neolithic settlement, is pre-dated by a short spell by sites such as Jericho. It is comprised on many relatively small dwellings with common features: evidence of a ladder and an oven on the south wall, indicating access from the roof, numerous human burials under the floors. There is no evidence of specialist or communal buildings or a social hierarchy. The walls of the buildings were decorated, sometimes with bulls’ skulls or vulture heads inside them. It seems that buildings were ritually burnt at the end of their lives, typically after one hundred or so years of occupation. The people ate cultivated crops, and domesticated sheep and goats and some wild cattle, more of the wild cattle during what appear to have been ceremonial meals.

One theme from the sixties epoch of excavation that didn’t make it through to the nineties was the idea of Goddess worship, in the sixties there was some enthusiasm for the idea that Çatalhöyük represented a matriarchal society which worshipped a goddess. This idea does not seem strongly supported by the archaeology, although there are a number of "goddess" statues discovered they are all small and not found in particularly salubrious situations. There is more evidence for the idea that the bull was venerated – I wonder about the links between this and the position of cows as sacred animals in Hinduism, and also its role as a pictogram that evolved into the letter "a".

I really enjoyed The Goddess and The Bull, having approached it somewhat sceptically because it was not the recommended book by experts (James Mellaart: the journey to Çatalhöyük by Alan Mellaart) and it wasn’t clear whether it was an intensely academic volume. The biographical material of the archaeologists is sometimes a little grating but it makes the book more readable. I felt I learnt a lot about archaeology and the Neolithic. There’s a website www.catalhoyuk.com, where you can see the latest developments – including annual reports up to 2017.