Book review: Why I’m no longer talking to white people about race by Reni Eddo-Lodge

Book review: Eye of the Beholder by Laura J. Snyder

A return to more traditional fare with 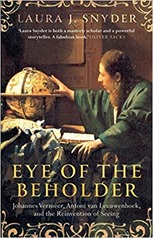 Eye of the Beholder by Laura J. Snyder. This is a collective biography of Johannes Vermeer and Antonie van Leeuwenhoek who were both born in Delft in 1632. Vermeer, a painter, lived for 43 years and Leeuwenhoek most famous as a microscopist lived for 91 years. Alongside the stories of their lives, Snyder also talks about the events in Delft, and the wider Netherlands, and the evolving understanding of optical phenomena that is relevant to both painting and microscopy.

A theme of the book is the idea that Vermeer and Leeuwenhoek knew each other, and possibly knew each other quite well – with their expertise feeding in to each other. This is a link that Snyder has discovered, and is somewhat circumstantial since there is no direct evidence of correspondence between the two men. The main evidence for the assertion is that Leeuwenhoek acted as executor to Vermeer’s estate, some have seen this as no particular evidence since Leeuwenhoek was a public official who might be expected to take on this role. But he only did this for four people, three of whom had known personal links. The other piece of evidence is that they lived within a few hundred yards of each other in a relatively small city and shared common interests in optical phenomena so very likely knew each other, they both knew Constantijn Huygens. In some ways the existence of a personal link is not important, rather the drawing together of technologies of camera obscura and microscopes as new ways to see and understand the world.

I note that as someone who has worked both as a microscopist and in photorealistic computer graphics this book is particularly close to my interests, and strikes a chord with me. One of the challenges of microscopy is understanding what on earth you are seeing, and photorealistic computer graphics brings in to sharp focus the mechanisms by which an image is formed. Even now, three hundred years after Vermeer and Leeuwenhoek, specialists in these fields will have undergone a personal journey of discovery where they sought out the thing they were looking for down the eyepiece of a microscope (possibly spending more time than they’d admit focused on the top surface of the coverslip rather than the sample). In photorealistic computer graphics rendering forgetting to include a light in their model and pointed the virtual camera in the wrong direction, leading to a completely black image are not uncommon beginners mistakes.

In the 17th century the Netherlands was a hotbed of scientific discovery, trade and art – the so-called Golden Age which had started in 1588 and came to an end in 1672 with the Franco-Dutch War. Despite much scientific work, the Netherlands were not to have a scientific society like the the Royal Society until the 18th century. Private art was commonplace in 17th century Netherlands, Snyder associates this with religious sensibilities – as a protestant nation the Dutch did not favour extravagant public, religious art but compensated with art in their own homes. On average each Delft household had two paintings. Also relevant to the story is the fact that the Dutch had only recently started adopting surnames in the 17th century, and it seems in the beginning they were often chosen thoughtfully which is alien to the modern mind for whom surnames are generally a given.

In Delft the biggest event of the book is the "Delft Thunderclap" in 1654, an explosion at a gunpowder store that killed over a hundred people and injured thousands more.

The camera obscura is the focus of the artist side of the story, it had been invented some time around the 13th century, and it was to join other optical aids for artists. A camera obscura is basically a box with a hole in it (originally room sized), where an image of what lies outside the box is projected onto a wall. Hyperrealism though the use of the camera obscura was something of a passing fad, Da Vinci had been scornful of the use of such aids, and there usage was something of a trade secret for artists. By the 17th century the camera obscura had evolved from a simple room with light entering through a hole to a system, possibly even a portable box featuring mirrors and lenses. The camera obscura allowed the artist to capture the geometry of a scene by copying the projected image (indeed camera obscura were also used by surveyors). What’s more by separating the image from the scene it served as a tool to better understand how light interacted with materials. Vermeer’s work shows signs of his use of the camera obscura from the late 1650s.

This is not to diminish the skill of a painter, it struck me that Vermeer’s style had elements in common with the much later Impressionists with subtle uses of colour and line being used to give the impression of a scene rather than painting and exact replica to the canvas.

Vermeer was to die in 1675 at the age of only 43, 1672 "Rampjaar" had left him close to destitute as the art market collapsed, and he had 11 children to provide for. He left behind only 45 paintings from his 20 year career.

The microscope is the focus of Leeuwenhoek’s side of the story, the microscope had been invented in the early part of the 17th century but was not much used until much later in the century with Robert Hooke’s magnificent book Micrographia showing what it could achieve. Leeuwenhoek’s microscopes are quite different from those we use today, they are simple spherical lenses mounted in metal plates smaller than playing cards. Leeuwenhoek’s skill was persistent and careful observation over a period of 40 or so years, reported to the Royal Society in London in over 300 letters. He discovered microbes, red corpuscles in blood, as well as the wriggling tails of sperm amongst much else. He studied the inner workings of things rather than just the surface appearance, as Robert Hooke had done. His preparation of samples equals those prepared today. I recall that Leeuwenhoek was long ignored in the history of microscopy because his work was so much in advance of anything for years after his death and he kept his methods secret, although Snyder makes no mention of this so perhaps I mis-remember.

I really liked this combination of biography, national history and history of ideas. Snyder’s style is warm and clear, I also enjoyed her earlier "The Philosophical Breakfast Club".