Book review: Eye of the Beholder by Laura J. Snyder 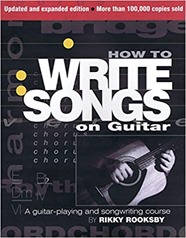 In a somewhat uncharacteristic turn my next book is about writing popular songs: How to Write Songs on Guitar by Rikky Rooksby. For me it follows on from Guitar Method – Music Theory by Tom Kolb. I’ve read several books about music theory as I’ve learnt to play guitar and they have left me a bit cold. The presentation of the algorithms to generate scales and chords is my sort of thing but there were always references to how chords made you feel that were never really explained. I was never clear on what I was supposed to be doing with this theoretical knowledge.

After Guitar Method I thought the next thing to do was look at chord sequences, and this book came close to the top of my searches. I also got Chord Progression Encyclopaedia by Tammy Waldrop which does exactly what it says on the cover – list out loads of chord progressions for guitar.

How to Write Songs is quite a different book, in fact it was just what I was looking for! It puts the musical theory I’ve learnt into context. It covers off some of the traditional musical theory of scales and chords but hones it down to what you are likely to actually need to write songs. The four ingredients are rhythm, melody (the tune of the voice), lyrics and harmony (chords). Rooksby seems to prefer "melody first" songwriting but outlines other methods on an equal footing.

How to write songs is divided into 16 sections, these cover the four ingredients listed above and some other things too. The sections on chords are nicely laid out, with which strings are providing which notes included (this is helpful because to the beginner this can be a bit mysterious). Rooksby also talks about how different chord variants "feel". The chord dictionary is spread across a couple of sections with more complex "fancy" chords covered in the second section.

Central to writing songs are "turnarounds", repeated sequences of chords that are used to build the harmony (chords) of a song. The melody (tune of the voice) fits in with this, or doesn’t, for effect.

There are sections on making demo recordings and a couple on more guitar specific techniques, I particularly liked the section on "altered tunings". I have seen these tunings annotated in guitar tabs but not been clear as to why they are used. Rooksby provides a good explanation as to the various types of altered tunings and where they are used. In a number of places Rooksby refers to how chords, particularly those including notes from a second octave are easier to play on piano.

The book finishes with three sections which recommend individual tracks, and albums that Rooksby sees as good examples of the songwriting art and some quotes from famous songwriters as to how they go about composing. The theme of whether songs are invented or discovered comes up a few times here.

Rooksby is opinionated in various places: he doesn’t like drum machines, fancy chords, or spontaneous decorations of melody (called melisma). This gives the book a human touch, and I suspect his opinions are pretty sound.

One of my frustrations with learning guitar is that numerous teachers go on about ear training, they often talk about not doing enough of it when they were learning. I realise now that there is a very good reason for this: ear training is actually really hard if you don’t know about the structures and chord sequences you are likely to hear. This is because for the naïve listener there is a large number of possible notes they could be hearing, and it is difficult to identify what it is. However, learning how songs are structured, and some of the theory and the options narrow down dramatically.

Everything in the book is supported by references to popular songs, and typically multiple songs are referenced for each point, so you’re likely to have heard at least one of them – and these days its very easy to find music online. I’ve listened to a lot of Radiohead and Arctic Monkeys which turn up a few times, I suspect the same will apply to many people (just with different artists).

The next steps for me are to look at the "song chords" table which lists the chords in each key, and also look at the chord sequences with their examples. Rooksby has written a number of other books, I think I might add his book on riffs to my reading list. Finally, I’m making Spotify lists of the recommended tracks and albums.

The production values for How to Write Songs are high, it is clearly and neatly laid out and well-printed. The prose is enjoyable and manages to avoid sounding dry which is a risk when writing about music theory. I’d recommend it to anyone interested in how popular music "works" on guitar.

I must admit I’d assumed that Rooksby was an American, possibly someone who had written a few songs I knew, but it turns out he is English, lives in Oxford and has a PhD in English literature (website)!