For my next book I read 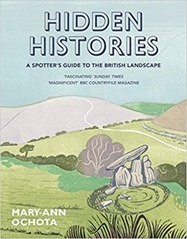 Hidden Histories: A spotter’s guide to the British Landscape by Mary-Ann Ochota. As a countryside walker and cyclists of many years, I’ve always been interested in what I saw and how it came to be, Hidden Histories is just the book for me.

The book is divided into broad sections: lumps and bumps, stones, lines and "in the village" and within each of these sections there are 10 or so topics covered over a few pages each. There are many illustrations, and photographs on pretty much every page. Domestic buildings and churches are covered but castles and stately homes are not which is not unreasonable.

If there is a gap it is in the coverage of industrial landscapes which is limited, this reflects my interests and where I have lived, and holidayed, as much as anything.

"Lumps and bumps" covers long barrows (collective burials dating back to the Neolithic), round barrows (single burials, found in nearly every parish dating back to the Bronze Age), hillforts (defensive earthworks from the Iron Age), miscellaneous earthworks and the ridge-and-furrow plough system. I was interested to learn that windmill bases can be mistaken for round barrows. One learning of this section is that there are only known burials for about 10% of the estimated population of prehistoric Britain. I grew up in Dorset which makes frequent appearances in this part of the book. Maiden Castle was a regular walking spot – it is the biggest Iron Age hillfort in Europe.

The ridge-and-furrow plough systems makes a re-appearance in the section on lines. Essentially visible ridge-and-furrow systems are usually at least seven centuries old and are the result of the medieval method of farming with ox-drawn ploughs which leave a shallow S-shaped furrow. This gentle S-shape is also seen in ancient field boundaries. The way land was owned and shared is also relevant, in medieval times land was common with patches exploited by individuals but individual plots did not have hedge boundaries. This ended with the Enclosures Acts in the 18th and 19th century that made land ownership more individual although in principle it shared land equitably in practice it favoured the rich who had the resources to exploit land in line with the new Acts. Enclosure Acts were particularly important in the Midlands and had widespread impacts on both people and the landscape.

"Stones" covers standing stones, stones in circles,stones in lines, stones with symbols on them, stone crosses, stone tools and wayside markers (stone ones!). Standing stones are difficult to date, and Stonehenge is pretty unique in that its constituent parts are not local, usually stone circles are built from local stone.

"Lines" talks about Roman roads, and other ancient pathways before moving on to the shapes of fields and various chalk figures. I grew up just down the road from the impressive Cerne Abbas giant which is 2000 years old, there is also a white horse on the hillside into Weymouth but that is of George III and dates back to 1808. I hadn’t appreciated that chalk figures require very regular maintenance which is impressive considering the Uffington white horse dates back to 1400BC.

Holloways have a number of mentions – these are ancient routes that have been worn below the prevailing ground level by use. It is chastening that after the Romans left their road building skills were not surpassed until the turnpike roads were introduced a thousand years later.

"In the village" covers various buildings found in villages, mainly houses and churches but briefly mentioning pubs and barns. The age of homes is of direct professional interest for me, although the focus of Hidden Histories is older buildings. I was bemused to learn that the term "Gothic" was originally applied as an insult coined in the 1600s to describe what they saw as overly ornate buildings from the 1200-1500s.

I learnt a wide range of useful facts from this book, such as "metalled" roads being derived from the Latin for "quarry" which has always puzzled me! I also learnt that "turbary" refers to peat workings, so I have learnt a new word to slip into conversation.

I’m interested in maps and computers so it struck me there are some interesting things to do in geospatial analysis relating to this book. For example, medieval ridge-and-furrow ploughing shows up quite nicely in LIDAR, as do other earthworks. Similarly field boundaries and place names, and other mapping features, are all in Ordnance Survey mapping products and these days are readily accessible by automated means.

Cheshire, where I live now, has few entries although on this morning’s cycle I was spotting what I now know to be Enclosure Act hedging with oak "standards" spread along it. Hidden Histories satisfies a curiosity I’ve always had about the countryside I’ve been traveling through.