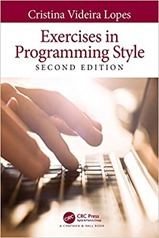 Recently our CIO has allowed us to claim one technical book per quarter on expenses as part of our continuing professional development. Needless to say since I was buying these books already I leapt at the opportunity! The first fruit of this policy is Exercises in Programming Style by Cristina Videira Lopes.

The book is modelled on Raymond Queneau’s book Exercises in Style which writes the same story in 99 different ways.

Exercises in Programming Style takes a simple exercise: counting the frequency of words in a file and reporting the top 25 words, and writes a program to do this in forty different styles spread across 10 sections.

Lopes talks about styles in terms of constraints, for example in the "Good old times" historical style there are no named variables and limited memory, in the "Letterbox" style objects pass messages to one another to prompt actions.

The shortest implementation of the example is in the "Code Golf" chapter with just six lines, other examples run to a couple of pages – a hundred lines or so. Lopes is somewhat opinionated as to style but quite balanced providing reasoning where unusual styles may be appropriate. This was most striking for me in the section on "Adversity" which discussed error-handling. Lopes suggests that a "Passive Aggressive" style with error handling all occurring at the top level in a try-except block is better than my error handling to date which has been more in the "Constructivist" (trapping errors but proceeding with defaults) or "Tantrum"(catching errors and refusing to proceed) style.

Sometimes the fit to the style format feels slightly forced, in particular in the chapters relating to neural networks but in the Data-Centric chapter I learnt how to implement spreadsheet-like functionality in Python which is interesting.

I’ve been programming for about 40 years but as a physical scientist analysing data or trying out numerical models rather than a professional developer. Exercises  brings together many bits and pieces of things I’ve learnt, often in the context of different languages. For a while I’ve had the feeling that I didn’t need to learn new languages, I needed to learn how to apply new techniques in my favoured language (Python) and this book does exactly that.

Once again I was bemused to see Python’s "gentleman’s agreement" methodology over certain matters. By convention methods of a class whose name start with an underscore are considered private but this isn’t enforced so if you really want to use a "private" method just go ahead. Similarly many object-oriented languages support a "this" keyword for the members of a class to refer to themselves. Python uses "self" but only by convention, you can specify "self" is "me" or whatever other name you please. The style format provides a nice way of demonstrating a feature of Python in a non-trivial but minimal functioning manner.

It is somewhat chastening to discover that many of the styles in this book had their abstract origins in the 1960s, shortly before I was born, entered experimental languages such as Smalltalk in the seventies where I would have read about them in computer magazines and became mainstream in the eighties and nineties in languages like C++, Java and Python, not long after the start of my programming career. Essentially, most of the action in this book has taken place during my lifetime! In physics we are used to the figures in our eponymous laws (Newton, Maxwell etc) being very long dead. In computing the same does not apply.

What I take away from Exercises is that to a fair degree modern programming languages can be used to implement a wide range of the ideas generated in computer science over the last 50 or so years so in improving your skill as a programmer learning new languages is not the highest priority. There is a benefit to learning new techniques in a language in which your are familiar. Clearly some languages are designed heavily to support a certain style, for example Haskell and functional programming but I found it easier to understand monads explained in the context of Python than in Haskell where everything was alien.

Exercises is surprisingly readable, the programs are well-documented and Lopes’ text is short but clear with references to further reading. It stands alongside Seven databases in Seven Weeks by Eric Redmond and Jim R. Wilson as a book that I will rave about and recommend to everyone!