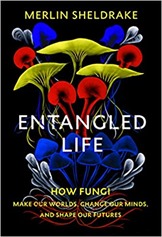 Entangled Life by Merlin Sheldrake is a book which came to me via my wife, as she read it she kept providing me intriguing nuggets of information about fungi so I thought I would read it next. For the older reader Sheldrake might be a familiar name, his father Rupert Sheldrake was something of a character perhaps best known for his theory of morphic resonance.

Entangled Life is not a dry, systematic study of fungi but rather a rambling exposition with much biographical detail. Each chapter contains a good description of some facet of fungi, alongside some broader discussion of the people and places Sheldrake visited to write the chapter and musings on the broader meaning of the facet.

The first chapter, entitled "A Lure", is on truffles, looking back this chapter is designed to entice us into reading further by talk of a very financially valuable, and desirable fungi. Sheldrake takes us to the woods of Italy for a truffle hunting trip providing scientific detail alongside the human story.

Next comes "Living Labyrinths", inviting us to change our mindset about how an organism is put together. Fungi are not like plants or animals, they are a network composed of hyphae. Different fungi have different network structures, and the hyphae in a network can be arranged in different large scale structures such as chords and rhizomorphs. The mycelium network can transport substances over distances, and also signals, although it isn’t clear how they do this. Mycelium networks can "solve" maze-like problems, I’ve seen reports of this in the past and I don’t see it as evidence of intelligence – essentially the networks solve a diffusion problem by using diffusion. They are a type of analogue computer.

"The intimacy of strangers" introduces us to lichens – fungi-algae symbionts. The structure of lichens and symbiosis were discovered in the second half of the 19th century. The discovery was something of a revelation, previously there had been organisms and their parasites – none of the cooperation that symbiosis is founded on. It is fair to say we are still learning a lot about lichens, including the fact that the partners in lichens can be quite fluid. Lichens challenge our ideas about what it means to be a species.

"Mycelial Minds" is definitely the most terrifying chapter – it details how ophiocordyceps takes over carpenter ants and has them behaving in very specific ways (climbing to a high point on a stem and waving their legs around) for the furtherance of the fungi. Also discussed in this chapter are LSD and the Psilocybin mushrooms, fungi or their derivatives that are psychoactive in humans.

"Before roots" covers the long standing relationship between plants and fungi – it is proposed that it was fungi that hauled plants out of the waters and onto land, hundreds of millions of years ago. Fungi specialise in accessing minerals locked in rocks, and the remains of lichens would have formed the first soils on land (they still do, when new land from volcanic activity or otherwise is exposed). This would have provided water-borne plants with a mechanism for accessing nutrients on dry land. Fungi still form a critical partnership with plants, extending and enhancing the plant’s own root network in exchange for energy derived from the sun by photosynthesis – fungi cannot photosynthesise themselves.

"Radical mycology" – the science side of this chapter is the development of fungi for the remediation of pollution and producing recyclable "green" materials. It starts with a discussion on the coal measures laid down in the Carboniferous period – this was a time when the mechanisms for decomposing wood were limited. Since then fungi have evolved which are efficient in degrading lignin – a key component in wood – this is a rare skill. The human side is the longstanding mycology counter culture, fungi have not had a high academic profile but have attracted an enthusiastic amateur following initially interested in psilocybin mushrooms but now more generally involved in research and discovery.

"Making sense of fungi" – the scientific element of this chapter is around fungi particularly their use in making alcohol. I was intrigued to learn of the "drunken monkey" hypothesis of our taste for alcohol – essentially our ape ancestors used alcohol as an indicator to find ripe (or even over-ripe fruit). Humans have a mutation in an enzyme which enables them to process alcohol, otherwise it would be (more) toxic to us – they evolved this ability before they started deliberate fermentation to make alcohol.

One of the recurring themes of this book is how relatively little studied fungi are, they don’t fit into our neat, longstanding picture of the living world consisting of plants and animals, and individuals rather than symbionts being the fundamental unit of biological thought.

I found Entangled Life a fascinating and enjoyable read, and I didn’t even have to buy the book!