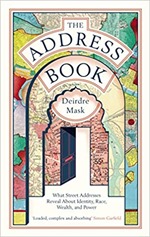 Next up is The Address Book by Deirdre Mask, this book is work related but to be honest I’d be reading it anyway. I work for a company, GBG, which provides address lookup services, it takes addresses typed by consumers and matches them to the definitive address data to provide a "clean" deliverable address. This means I have contemplated the structure of addresses, how they vary from country to country and how important they are for our day to day life.

The Address Book starts with some motivational chapters around why we should be interested in addresses, starting with a description of the situation in West Virginia where consistent street addressing was only introduced in the 1990s, and the problems that arise from this! Also included in this section are reports from Kolkata and Haiti.

In Kolkata the focus is on Addressing the Unaddressed, a charitable organisation which provides those living in slums with an "address" which enables them to access services. We often use an address as part of the identity of a person, a name is not enough. There are a number of Ian Hopkinson’s in the UK, and indeed around the world but I am the only one living at my address. In fact the Addressing the Unaddressed addresses are based on Google’s Plus Codes, these are not traditional street addresses, rather shorthand for latitude-longitude pairs. What3words provides a similar, closed source service. Mask discusses the shortcomings of such systems towards the end of the book. Essentially they provide no sense of community around living in shared labelled spaces.

In Haiti the discussion is around an outbreak of cholera, ultimately linked to the UN forces there to support the country after the 2010 earthquake but it starts with a discussion of Jon Snow and his famous work on the Broad Street pump. The importance of addressing is that when Snow was doing his work In London the General Registry Office had relatively recently (1837) started recording births and deaths, including the address at which they took place. This type of epidemiological study is not possible without street addressing, certainly not at that time. Nowadays we can use GPS devices to pinpoint deaths in the absence of addresses.

Addressing starts with street names, and in the UK, and other European countries street names started with function. Main Street, Church Lane are the more socially acceptable examples. However, as cities grew duplicate names became a problem. In 1853 London had 25 Victoria Streets and 25 Albert Streets. The pressure to add numbering to street names comes from centralised governments, if you want to take a census of your population to tax them or raise an army or plan services then numbered street addresses are pretty much essential. Registration of land ownership is also important. Such censuses generally started in the 18th century. Following on from this was the introduction of cheap, universal postage – which also requires street addressing. Requiring citizens to have surnames was part of the same process of enumerating the population.

The common scheme of using odd numbers on one side of a street and even on the other was invented by Clement Biddle in 1790, it is not the only system. There are other ways though, in Japan numbering is often by date of construction i.e. newer buildings have higher numbers. The Czech Republic has a dual numbering system, each address has a number used for navigation and a number used for government registrations. There are also systems where numbering is based on distance along a road.

The American scheme of numbering rather than naming streets, or at least naming them in a very systematic and often anodyne fashion dates back to Philadelphia and the Quakers involved in its founding. Quakers were not enthusiastic about naming things after people – hence the numbering system.

Circling back to street names, these are often intensely political, Mask talks about naming and commemoration in South Africa, America, Iran and Germany. In South Africa and America these disputes revolve around race, for South Africa it is to what degree figures from the apartheid era are celebrated, and what actions should exclude someone from commemoration in a street name. In America it is the celebration of Confederate figures that stirs passions. Iran likes to celebrate revolutionaries in its street names, and the case Mask cites is Bobby Sands, the IRA hunger striker – an uncomfortable topic for me as someone who is English (and grew up during the IRA bombing campaign in the seventies). Germany is included for its Nazification/De-Nazification process – after the Second World War many streets and places simply reverted back to pre-Nazi names. There are a surprising number of "Jew Streets" in Germany, Jewish people have long been restricted to living in particular places.

Naming and addressing are deeply personal, efforts to number houses are often resisted or treated with suspicion. The removal of long standing place names causes a sense of dislocation, the selection of names can cause distress. We’ve seen some of this in the UK with our branch of the Black Lives Matter movement.

In New York City there is a process for buying street addresses, so developers will pay money to get an address on a desirable street even if their building is not accessible from that street!

This is an enjoyable read, written in an approachable manner about a fascinating subject.