Book review: The clock and the camshaft by John Farrell 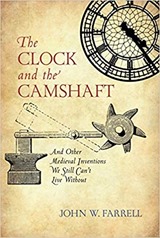 The clock and the camshaft by John Farrell is the story of technology through the Middle Ages which went on to support the Renaissance and the Scientific Revolution.

The book is structured by invention, and although some of the inventions are technologies as we would generally understand them there are also chapters on universities and monasteries, and languages. Each chapter looks at the ancient antecedents of a technology, where there is one, before looking at its place in the Middle Ages and how it played on to the Renaissance that followed. The antecedents are typically in the Roman Empire, China and the Middle East. The overall structure of the book is reminiscent of the technology “trees” one finds in a certain sort of computer game (Civilisation/Age of Empires).

There was a huge drop in population after the end of the Roman Empire in Europe in the 5th century CE until the 9th or 10th century. People no longer lived in towns or cities, and the art of building with stone appears to have been lost across much of Europe.

Food is a core concern at anytime and there were a couple of technological developments during the Middle Ages which helped here. The plough, used in the Mediterranean, was developed to better suit heavy Northern European soils. Horses were adopted to pull ploughs through the development of horse shoes and suitable harnesses.

In the Middle East water wheels were used in irrigation, from several centuries BCE. In Northern Europe irrigation was not quite such a concern but water wheels for power, in the first instance for milling wheat were important. This is not a simple technological development, for most individuals working the land it is convenient to hand mill wheat for your own consumption – a water powered mill is not worth the effort in maintenance or in initial capital outlay. This is where feudalism and monasteries get involved, feudal barons and monasteries can build and maintain a mill economically and they have subjects whose grain can be milled, for a price. Feudal masters obliged their subjects to use their mills, and pay a tariff to do so and under threat of punishment if they were found to be milling their own grain.

Once you have something that goes round and round, driven by a water or wind mill, then the next step is something that goes forwards and backwards. Or, more prosaically, converting rotation motion to linear motion. This might be to power a saw, or more often, to hammer things. Hammering things is important in the production of cloth (fulling), paper (pulping), and metal (crushing ore).Who would have thought hammering things was so important?

Paper is another key technology, the earliest writing is found in clay which was then superseded by papyrus – produced almost exclusively in Egypt. For rough notes codexes were used – parallel thin pieces of wood tied together. In Europe, after the fall of the Roman Empire, parchment made from the skins of goats or calves was used but this required a lot of dead animals. Meanwhile in China paper made from rags was being developed. This innovation was developed in Europe too, this arrival was key for new businesses. Now tradespeople could write things down relatively freely, critical for banking, and important in other businesses.

The challenge with clocks is to allow an power source to release its energy at a steady rate, this is done using an “escapement” mechanism. The first mechanical clocks were recorded in Europe towards the end of the 13th century.

Having forgotten how to build with stone at the end of the Roman Empire the cathedrals of the Middle Ages, built mostly in the 12th and 13th centuries were a sign that the skill of building with stone had been rediscovered. They were an evolution of Roman designs for grand buildings which allowed for much greater light through the insertion of windows. They followed the stone built castles of the Norman period around 1000 CE. Cathedrals are a rather more complex building than a castle but castles provided a good training ground.

Religion provided the impetuous for collecting manuscripts from the Arab world, during the 12th and 13th centuries with a view to improving their astronomic determinations of the date of Easter. Along the way they collected other manuscripts, returning to Spain and Italy to translate them.

Eye lenses were introduced in the first half of the 12th century, and appeared to evolve from glass used to display relics. There were antecedents of lenses found in ancient Egypt even back to the Bronze Age. The Venetians were early specialists in glass making, founding a guild in 1320. There was also expertise north of the Alps in Nurembourg but the quality of ground lenses dropped from 1500 with the first telescope makers towards the end of the century making their own lenses rather than buying them.

Monasteries, and monks, played an important role in carry knowledge across the Middle Ages after the fall of the Roman Empire. They were also important players in the material world, taking the part of a sort of feudal lord in some instances. Universities were in some senses a spin off from the collision between the Church and the Secular state, they arose originally as a place to study law – a topic which came to the fore in disputes between the Church and secular states over which had legal authority. Universities and monasteries are both examples of legal entities which were not people, an important innovation in law.

The book finishes with a chapter on lodestones which lead to the development of compasses for navigation, astrolabes and boats. Astrolabes were designed for astronomical measurement but also served as timekeepers, their design fed into the layout of the clock face. Boats were another technology which evolved as it moved north, the key innovation was switching to a skeleton-based design where the keel and ribs were laid down first, and then planks attached to them.

I liked this little book, much of what I’ve read in the history of science covers a later period – from the 17th century onward – The Clock and the Camshaft provides useful background, and is also very readable.