Book review: The Pope of Physics by Gino Segrè and Bettina Hoerlin

In a break from my usual service I thought I’d write about some DIY I have been doing during the covid-19 movement restrictions which have meant we have been confined to the home for a large part of the time. The idea of this blog post is to remind me what I have done, and perhaps provide a guide to others.

Our house has a small conservatory at the back which opens into the dining room and looks out onto the back garden which is rather pleasant. It contains a large collection of toys, mainly Lego which lives on and in  Ikea Trofast storage units around the perimeter. There is a bespoke storage unit which holds more toys, including mounts for my son’s substantial collection of nerf guns. More recently it has gained an electric drum kit, and my guitar amplifier. It is where I practice playing, slightly detached from the rest of the family but vaguely audible and visible. It is also the cat’s dining room.

Below is a "before" picture, taken nearly 10 years ago to illustrate our new patio. It serves to shows the context of the conservatory rather than illustrate the problems: 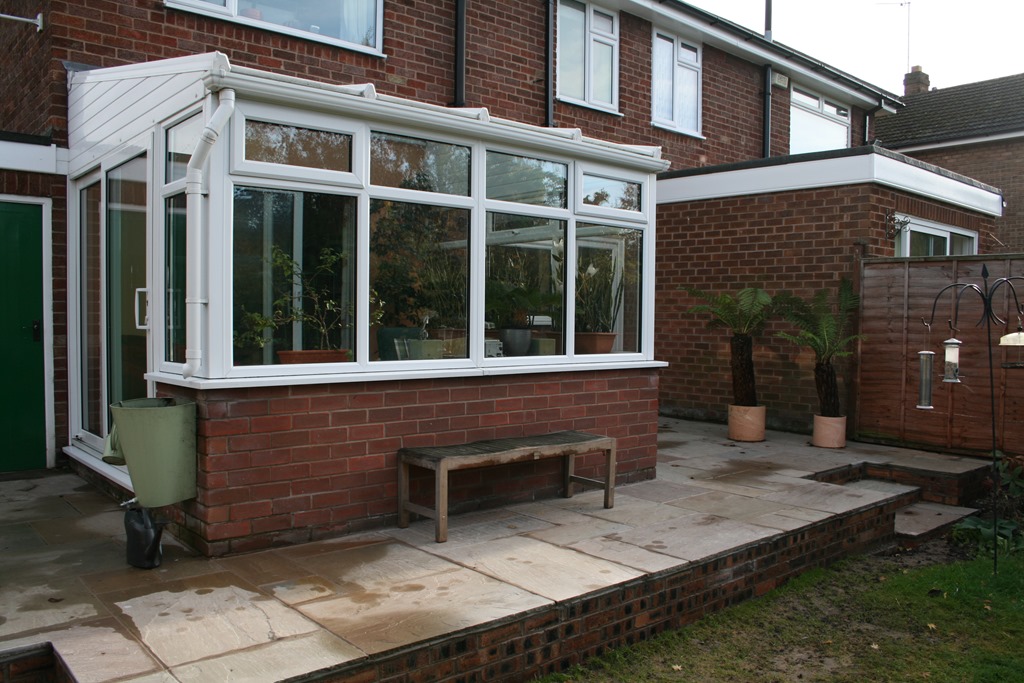 The Problem is that the conservatory faces west and this means for a substantial part of the year it gets unbearably hot in the afternoon, and very bright. Before the movement restrictions there were no blinds or window covers of any sort. Along with the issues of heat, it is also a little unattractive to look into and the view to one side looks into an odd space outside our kitchen door, facing onto our neighbour’s kitchen extension. So some decorative interest would not go amiss.

I have a vague plan to replace the conservatory with an extension running across the back of the house, so I don’t want to spend a huge amount of money for something that will be torn down in a few years time.

The deluxe solution to this problem is to get in someone like Hilary’s blinds who do a bespoke installation. It’s not quite clear what the price would be but it looks like well over £1000 possibly approaching £2000. Also they cover off the blinds side of the problem well but not any sort of decorative elements and the flexibility around what to do with the roof is limited.

I also looked at these clip fit blinds (and here), they are made to measure and have a spring fitting that sticks under the double glazing seal to hold them in place. They would be rather cheaper than the Hilary’s blinds option – probably a couple of hundred pounds for the four windows I’d like to install them on – the big ones looking down the garden. I looked at a few options like this but held off since I wasn’t confident of delivery under the circumstances. I also wasn’t too sure about whether the anchoring mechanism would work on my windows and under the current circumstances sorting out issues would be a pain.

As it turns out there is a very cheap blinds solution: Stick-on paper blinds! You can get a pack of six here on Amazon for less than £25. I liked this option because it was really cheap and, following a comment on the Q&A on Amazon I thought I could use the paper blinds as a try out for style and if I liked them go for some of the clip fit ones.

For the roof I felt there should be some sort of billowy sail like drapings which I thought would be rather good but I couldn’t find just I what I was looking for – again there seemed to be bespoke options but the route to DIY installation was not so clear. There are "conservatory sails" but these are sails which you use as a sun shade rather than install in a conservatory. I worried about fixings for such things too – I would need to screw mountings into the UPVC frame of the conservatory which didn’t seem ideal. In the end I went with this high reflective film for the roof, I think it had come up as I searched for blinds and the like. It cuts out about 90% of the light which is fine for a sunny spot. I spent about £140 on the reflective film.

Finally the decorative part to go on the windows looking towards the back door. It took me a while to hit the right such term for this, I ended up with this "privacy film" with a bird pattern – I spent about £40 on this.

I installed in three stages. The patterned film was a couple of evenings after dinner. The paper blinds similarly a couple of short evenings. The reflective film was an evening, and three weekend mornings – a rather bigger job. I wish I’d installed the paper blinds last because they didn’t like having water dripped on them and installing the films required quite a lot of water

The paper blinds are the simplest to install – you cut them to width with a pair of scissors and then stick them to the window at the top with a sticky strip. I found cutting them neatly tricky because they are pleated, and sufficiently thick that you can only cut them a couple of folds at a time. They come supplied with some little alcohol wipes so you can make sure the window you stick to is really clean. Each blind comes with a couple of plastic clips which you can use to hold the folds of the blind up. The inadequacies of my cutting and installation are not too obvious, these blinds work quite well. I found it necessary to cut them to length in order that the clips were able to old the folded part. They could do with a stiffening rod along the bottom edge.

The decorative film was relatively easy to install, you cut to size then peel off a backing film, wet the window thoroughly then squeegee them into place to remove the bubbles. My Stanley knife blade was feeling its age so I ended up scoring the film with the blade then cutting it with the scissors which occasionally left untidy edges. If I did this again I’d use more water on the window – a lesson I learnt from the final piece to be installed.

I left installing the reflective film for last since it involved working overhead and looked the most difficult. The length of the roof panes in the conservatory is nearly 3 metres, I decided wrangling that length of wet, sticky, thin film above my head was a step too far. So after a bit of experimentation I went for installing 150 centimetre strips, this worked pretty well. Installation was similar to the decorative film, except the instructions suggested spraying the window with water spraying the film with water and then spraying the exposed surface of the film with water once it was in place. This was a lot of water, most of which dribbled down my arms as I squeeged the film into place but it actually worked really well. Initially the film has lots of bubbles under it but one pass of the squeegee sorts most of that out. You need to clean the windows properly before putting the film on since any dirt leaves pimples in the film. I never quite cracked cutting the film to exactly the right size, if you cut slightly to big then I found it impossible to cut neatly down to size once in place (perhaps a sharper Stanley knife would have helped), so I ended up undersizing slightly – this isn’t too noticeable though. Similarly butting the edges of the film together was a bit tricky but mistakes here only show if you stand staring at the roof. Finding a corner to peel off the backing takes a knack, I found the best way was to pare away a corner. 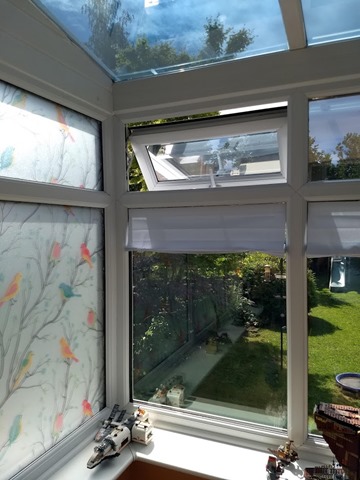 Close inspection shows the installation is not perfect but imperfections are only really noticeable to me when I go looking for them. This second picture shows a bit more context, it is full sun outside and the conservatory is not overheating! 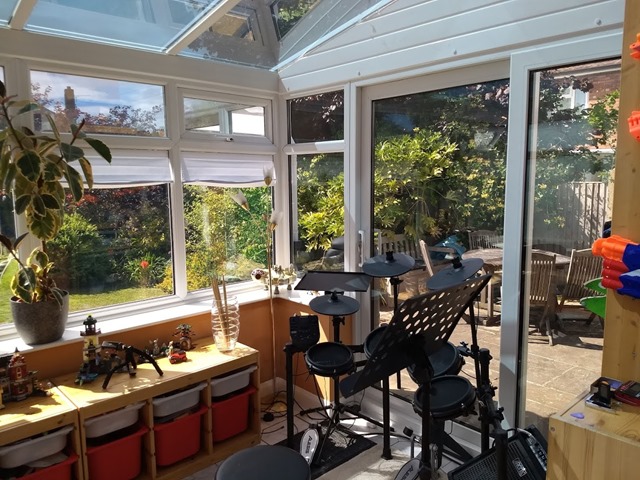 I wondered about putting some modesty panel style film on the lower half of the patio doors.

I am quite pleased with the results, the conservatory no longer gets unbearable hot in the sun. The reflective film is perhaps a little too reflective in the morning making the dining room a little dim. I’m not sure what the solution is here, the conservatory is quite small and I worry more substantial blinds, and their control mechanisms would be too bulky. You can get electrically switchable window/films but they cost about £40 for an A4 sized panel. The blinds look like pleated paper which is exactly what they are – I will replace them with proper fitted ones in due course.