Strategies for dealing with anxiety

Book review: The Pope of Physics by Gino Segrè and Bettina Hoerlin 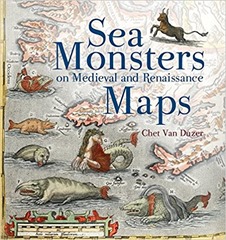 A borrowed book for my next review: Sea monsters on Medieval and Renaissance Maps by Chet van Duzer. Mrs H bought this as a by-product of buying a Christmas present on some quirky gifts site.

The book is well-described by its title, it is about sea monsters on medieval and Renaissance maps. Although a couple of classical antecedents are mentioned the main action starts in the 9th century and finishes at the beginning of the 17th century.

The book is organised roughly chronologically without chapters but with sections recorded in the contents – there are approximately 50 sections broken up by four "pictorial excursions". Much of the material is from the 16th century. As we go further back in time fewer and fewer examples of any sort of written or printed materials survive. Prior to 1472 any maps will have been reproduced by hand rather than printed.

Sea monsters were not found universally in maps through this period, in fact they were relatively rare. Adding sea monster was an additional cost and rarely added any useful information. The sea monsters were often drawn separately from the cartographic elements of the map, suggesting they were a specialisation. Sometimes they were direct copies from other sources. Sea monsters were often derived from recent scientific works, and influences can be seen across multiple maps. Sometimes the sea monsters depicted are playing a role in myths or stories such as Jonah and the whale, or the story of Saint Brendan who, on a voyage, is said to have landed on a whale, not realising its nature a fire was lit and the whale sank beneath them.

There is a lot of evidence of artist working from verbal descriptions of animals by non-expert observers. This is at a time before naturalists had been invented so observations of wildlife were not systematic. There’s a great double page spread illustrating the development of drawings of walruses from pretty much elephants to recognisable walruses(see below). 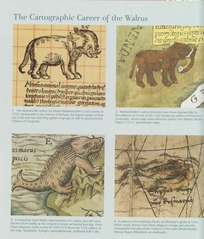 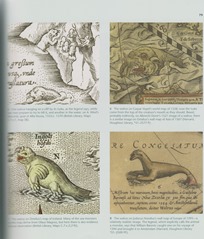 Figure 1: The cartographic career of the Walrus

Sea monsters came in various forms, many reflected real animals we might see today, although rendered strangely as we see with the walrus. Others were human – animal hybrids such as mermaids. Finally there are the outright whimsical – various dragons, krakens, unicorns – owl faced creatures and the like.

Mappamundi were the earliest maps to contain sea monsters although they are not maps as we would recognise them, you couldn’t navigate by them. They were symbolic representations of the world both physical and spiritual, rather than being entirely useful for navigation. A common feature was that the focus in these maps on the land rather than the sea. I was confused by mentions of the Beatus mappamundi which appears in multiple locations before realising that these were copies of a single mappamundi which varied since they were manually created. The place name refers to a particular copy (i.e. Genoa or Manchester), and different copies have different sea monsters. They are based on a map found in the Commentary on the Apocalypse by Beatus of Liébana. This was written sometime in the 8th century and subsequently copied.

The earliest surviving navigational maps are from the 13th century, these are intended as more functional objects and initially focussed on the region around the Mediterranean. In contrast to the mappmundi, these maps were focussed on the sea and coastal areas. There were variants made which clearly played a more decorative role, collectors items that showed your wealth and knowledge. These maps were more likely to contain illustrations of sea monsters.

In addition to freestanding maps there were also illustrated versions of Ptolemy’s Geography which included sea monsters, although the Madrid version of 1455-60 is the only manuscript version to include such sea monsters. Later printed version contained more sea monsters.

The sea monsters in Olaus Magnus’s Nautical chart and description of the Northern lands and Wonders published in 1539 are particularly rich and varied. They can also be found copied in Mercator’s globe of 1541 and Euphrosynus Ulpius’s globe of 1542. Mercator was less eclectic in his collecting of sea monsters for his atlas of 1569.

The book finishes as the 17th century opens when fantastical sea monsters on maps largely fell out of favour to be replaced with more ships and practical illustrations of whaling and the like. The sea was no longer quite so mysterious and man was increasingly exerting control over it, and its contents.

This is a fun book, a nice present for a cartophile. It would have been good to have a timeline of the maps discussed. There is probably an interesting parallel book on the monsters seen in terrestrial maps of the same period.