Strategies for dealing with anxiety 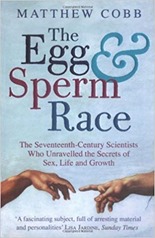 I follow quite a few writers on Twitter, and this often leads me to read their books. The Egg & Sperm Race by Matthew Cobb is one such book. It traces the transition in thinking on the reproduction of animals, including humans, which occurred during the second half of the 17th century.

Prior to this we had some pretty odd ideas as to how animals reproduced, much of it carried over from the Ancient Greeks. Ovid and Virgil both claimed that you could make bees by burying a bull with its horns protruding from the ground, waiting and then cutting off the horns to release the bees! This confusion is not surprising, the time between mating and the appearance of young is quite long, and the early stages of the process are hidden by being very small, and deep inside animals.

A random “fact” I cannot help but repeat is that Avicena wrote that “a scorpion will fall dead if confronted with a crab which a piece of sweet basil basil has been tied”. I wonder sometimes with quotes such as these whether they are a result of mistranslation, or a bored scribe. The point really is such ideas were not discounted out of hand at the time. The Egg & Sperm Race starts with a description of da Vinci’s copulating couple which is beautiful but wrong – da Vinci connects the testicles to the brain – these structures do not exist.

The central characters are Jan Swammerdam, Niels Stensen (known as Steno) and Reinier de Graaf, who met in Leiden at the university in the early 1660s when they were in their early twenties. Swammerdam and Steno were a little older than de Graaf and were close friends. Soon after meeting in Leiden they visited Paris where they continued to build contacts in the scientific community.

In understanding generation a first step was to realise that all animals came from other animals of the same species, and that this meant mating between two animals of the same species. Steno went to Italy and worked with Francesco Redi’s whose experiments were key to this, he checked exhaustively that insects did not arise from the putrefaction of material. Swammerdam was also interested in insects, classifying four different types of invertebrate development and showing that in moths traces of the adult form are found in the caterpillar. At the time it was not clear that the larval stage and the adult were the same species.

A second step was to realise that all animals came from eggs of some sort, William Harvey –  of blood circulation fame – did experiments in this area but although he stated this conclusion but it was not well-supported by his experiments. In the period at the beginning of this book, the role of the ovary was not understand. Steno carried out dissections on fish both those that laid eggs, and those that gave birth to live young from this he concluded that the ovaries were the source of eggs and asserted that this was the case for humans as well. This idea rapidly gained acceptance.

The discovery of the human egg, and its origins in the ovary, was the subject of a dispute between de Graaf and Swammerdam on priority. The Royal Society decided in favour of van Horne with whom Swammerdam had worked on the dissection and illustration of female reproductive anatomy. To modern eyes the written record of the dispute, in letters, and publications is surprisingly personal. De Graaf died at the age of 32 just prior to the Royal Society decision. It was a difficult time in the Netherlands with the country at war with England and France with France troops invading parts of the country.

Leeuwenhook cast a spanner into the works with his microscopical studies, he observed spermatozoa but not the female egg and as a result became a “spermist”, believing that life came from the sperm in contrast to the “ovists” who believed life came from the egg. We now know that they are both right. The human egg was not observed until 1826 by von Baer. And I have to mention Spallazani’s experiments on frogs wearing taffeta shorts, demonstrating that male sperm was required to fertilise the female egg.

The final chapter covers events from the end of the 17th century or a little later to present day. Linneaus’s classification work, and Darwin’s theory of evolution follow on from some of the core realisations of this earlier period. Neither Linneaus’ work nor Darwin’s work make much sense if you don’t believe that animals (and plants) grow from eggs/seeds which came from the same species. It wasn’t until von Baer’s work in the early 19th century that the female egg was observed.