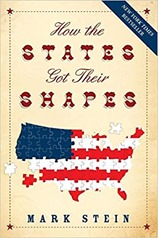 How the States got their Shapes by Mark Stein is that book that does exactly what it says on the cover: explain the origin of the shapes of the states of the United States. The book starts with some broad brush strokes that underpin the shaping of many states before going through each State in alphabetical order.

States are not strictly comparable with European nations but it is interesting to compare the never-straight borders of Europe with the regularity of particularly Western states. To a British European the events described in the book are all terribly recent – much of the action occurs during the 19th century! I considered extending this statement to all Europeans but there has been quite a bit of change in national borders in Europe over the last 200 years.

The large scale features of the USA arise from a number of sources. The earliest of these originate from the French and Indian War in the mid-18th century which saw the England and the colonists take the territory around the Great Lakes from the French and subsequently take further land from the French in the Louisiana Purchase. Further to the west territory came from the Spanish and then a newly independent Mexico. The border with Canada was agreed largely at the 49th parallel with the British in 1818. Later the Dutch would cede their territory along the Hudson river and the Spanish the last of their territory in what is Florida.

There are some recurring themes determining the shapes of states, one that comes up repeatedly is the desire for Congress to create States of equal size, in the West there are sets of states with the same height (3o) and width (7o). This concept extended to access to resources, so the ports on the Great Lakes are shared amongst the surrounding States. A second big driving force is slavery, the Missouri Compromise placed a boundary at a latitude of 36o 30′ below which slavery was allowed, and above which it was not. This motivated boundaries of states, and led to a battle to create equal numbers of states above and below the line.

There are irregularities. Boston Corner looks like it should belong in  Massachusetts but is actually in New York state, this is because the terrain made access to Boston Corner from the rest of Massachusetts difficult. In the early days this type of inaccessibility led to lawlessness, so states were willing to cede territory to avoid it. Whole states were created to address potential lawlessness, when gold was discovered in what is now Idaho it was felt too distant from Oregon to be ruled from there with the influx of unruly gold miners. There was also a concern that they would displace the coastal Oregonians from government.

Sometimes a river makes a good boundary although when the river has tributaries things get a bit tricky, it is even worse when borders are defined with reference to “head waters” which are notoriously difficult to locate. The other problem with rivers is that they meander – meaning that chunks of a State may find themselves on the “wrong” side of a river when the river moves. In some cases surveying errors and mistakes in negotiations led to oddly formed borders.

The supersize California and Texas states are a result of their own origins in virtual nationhood. Texas was, for a brief period, an independent country which subsequently joined the Union. California formed with the influx of the miners who came for gold, the Union was more concerned that they join than try to enforce borders upon the new State.

The charters of the original US colonies which later evolved into states typically gave them territories that stretched all the way from the Atlantic to the Pacific coast, during the 17th and 18th centuries this was largely moot – colonies scarcely had the wherewithal to maintain small populations on the  Eastern seaboard. The British monarchs granting these charters were not necessarily consistent, or particularly well-advised. So some boundaries are defined by “headwaters” which are notoriously ill-defined.

It is inevitable that the book is a bit repetitive, after all every border has two sides. This is occasionally jarring but usually handled quite well with cross referencing.

Missing from this book is much reference to the Native Americans, they are mentioned as an aside in a few places but little more than that. There is another book in the territories of the Native Americans prior to the European colonisation of the country – I just don’t know where it is! This article on The best books on Native Americans and Colonisers looks like a good place to start.

Overall I quite enjoyed this book, I read most of it on a long train ride. I suspect maps and boundaries are a bit of a niche interest but I feel I also picked up the broad shape of the creation of the USA.