My blogging this year has been entirely book reviews, you can see a list on the index page. I still find blogging a useful discipline to go with my non-fiction reading but my readership is so low there seems little point in writing other things for a wider audience.

A number of the books I reviewed related to music, I feel this is cheating a bit on the book reviewing front since these are typically teaching books which are more guided exercises than prose. I also read Ian S. Port’s book The Birth of Loud which is about the origins of the electric guitar from the point of view of Leo Fender and Les Paul. The music books are reflected by an increased collection of musical instruments in the household, we started the year with my electric guitar and electric and acoustic guitars for Thomas. We have since gained a bass guitar, for Sharon; a ukulele, for travel; an electric drum kit; an acoustic guitar for me (it’s very pretty – a Fender Newporter, pictured below); and for Christmas a keyboard for the family. 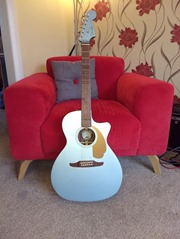 To learn to drum I got the Melodics app, which plugs into the drum kit and gives direct feedback as to whether I was hitting the right thing at the right time. I found this really usefully but discovered as a result that my guitar playing involved a lot of pausing for thought between passages, so I’ve started using Youcisian for guitar which has similar feedback functionality. The musical year finished with us getting a family present of a keyboard, and now I discover the theoretical side of music is so much easier on a keyboard – on a guitar the notes wrap across the fret board so you can access a couple of octaves with one hand in one place. This is convenient but it means note positions are not as obvious as on a keyboard where everything is laid out in a nice straight line.

Beyond music my reading has been quite eclectic this year. I started with Mapping Society on the use of maps to communicate data about society, moved on to a biography of Hedy Lamarr the Hollywood star who patented the frequency hopping method for secure communications. I went through a spell of reading more work relevant books – a couple of books on JavaScript, a book on marketing and one on international culture and how it impacts business interactions, and a book on rapid prototyping in business. I read several fairly academic history books, Higher and Colder on extreme physiology experiments on Everest and at the poles, Gods and Robots about representations of robots and similar in Greek and other mythology and Empires of Knowledge about some of the correspondents in the Republic of Letters. I also read the sumptuously illustrated catalogue of the Matthew Boulton exhibition. I read a couple of more data science oriented books (Designing Data Intensive Applications and Deep learning with Python). Angela Saini’s book Superior, on race science was a highlight. Returning to my roots I also read Lost in Math by Sabine Hossenfelder which is about how theoretical physics has lost itself in a search for mathematical beauty.

This years holiday was in Benllech once again, only a short drive for us from Chester. Thomas has been learning to swim, and Sharon and Thomas rather enthusiastically flung themselves into the chilly Irish Sea. To be fair the weather wasn’t too bad, we had a couple of really warm days – I got sunburnt feet – and only a couple of heavy downpours in parts of the day when it didn’t matter. 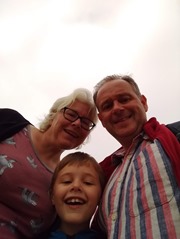 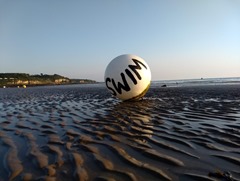 Politics has been largely miserable over the last year, Brexit failed to happen several times through the year but only after it felt we had been brought to the brink of crashing out of the EU with no deal which I found stressful, and now we have a Tory government with a significant majority led by someone unsuited to run a whelk stall which will take us out of the EU, probably as a cliff edge towards the end of the year. I suspect the General Election was won in part because voters are fed up with Brexit paralysis, even those that wish to remain were probably not greatly enthused by the prospect of a second referendum which had every sign of being as tightly contested as the first.

On the positive side, my own team, the Liberal Democrats, has seen a general rise in its fortunes. We have been consistently taking council seats from Labour and Tory, with gains considerably above expectations in the May elections. In the unexpected EU elections in the summer the Liberal Democrats polled second with 19.6% of the vote with only the Brexit Party ahead of them, I tend to see EU elections as indicative of general support in the absence of the First Past the Post system. In parliament we saw mixed fortunes, we increased the number of MPs by defection and by-election to 21, then dropped back to 11 seats in the December General Election, losing our leader Jo Swinson in the process. This is despite growing our vote share from 7.4% to 11.6%, you’ve got to love the First Past the Post system!

Ever keen to be forced to do new things by apps, I’ve started learning Arabic in Duolingo, I have to admit this is largely due to finding Arabic script attractive. I suspect I cheat quite a lot by using minimal pattern matching rather than full understanding the language to get some answers right.