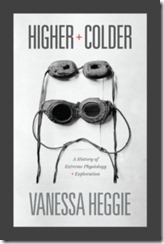 Higher and Colder by Vanessa Heggie is a history of extreme physiological research in the later nineteenth and twentieth century. It is on the academic end of the spectrum I read, it is not a tale of individual heroics, although I found it quite gripping.

The action takes place largely in extreme environments such as very high mountains, and the polar regions. There are some references to high temperature environments but these are an aside. One of the themes of the book is the tension between laboratory physiological experiments, such as the barometric chamber work of Bert in 1874, and experiments and experiences in the field. It turns out it is hard to draw useful conclusions on survival in extreme environments from laboratory studies. Much of this work was done to support exploratory expeditions, mountaineering, military applications and more recently athletic achievement. The question is never “Can a human operate at an altitude of over 8000 metres?”, or the like, it is “Can Everest be scaled by a human with or without supplementary oxygen?”. So factors other than the “bare” physiology are also important.

Some of the discussion towards the end o the book regarding death, and morbidity in expeditions to extreme environments brought to mind the long distance marine expeditions of the 18th century. Its not discussed in the book but it seems like these extreme physiology field programmes go beyond simple field research, they are often parts of heroic expeditions to the ends of the earth.

The book opens with a discussion of mountain sickness and whether its cause is purely down to low oxygen or whether other factors are important. One section is titled “Only rotters would use oxygen?” – the idea being that climbing Everest was retarded by a reluctance to use supplementary oxygen. In fact oxygen apparatus only really became practical for climbers in the 1950s, so the reluctance is more to do with technology than honour. The climbing problem is different from a military aircraft where weight is relatively unimportant. Fundamentally there is no short term acclimatisation to altitude. Himalayan populations show some long term adaptations but Andean populations are quite different in terms of evolution scale adaption – populations in the Himalayas have been there much longer. Mentioned towards the end of the book is the fact that humans foetuses spend their time in a low oxygen environment, so these physiological experiments have applications well beneath the mountains and the skies.

The selection of participants into the field, both as experiment and subject, was based on previous experience, gender, class and connections. This means they were almost entirely white and male, particularly those to Antarctica where the US military refused to transport women for a considerable spell. The extreme physiology community is quite close-knit and difficult for outsiders to penetrate, there is a degree of nostalgia and heritage to their discussions of themselves. Although women played a part in missions dating back into the earlier 20th century their presence is hidden, publication culture would typically not name those considered to be assistants. The first woman to overwinter in the British Antarctica base was in 1996.

Native people are similarly elided from discussion although they were parts of a number of experiments and many missions. An interesting vignette: the conventional ergometer which measures human power output was found not to be well-suited to Sherpas since it was based on a bicycle, utterly unfamiliar to a population living in the high Himalayas where bicycles are uncommon. Also the oxygen masks used by Western climbers need to be adapted to suit the differing face shapes of Sherpas. Heggie introduces the idea of thinking of native technology as part of bioprospecting. I was intrigued to learn that “igloo” originally meant something very specific, one of a class of structures from compacted snow, but it was corrupted to mean any building made of compacted snow. Pemmican is another technology drawn from the natives of Arctic lands. These technologies are usually adapted and there is a degree to which they are not adopted until they have been “scientifically proven” by Western scientists.

It turns out that participants in polar expeditions don’t experience much cold – they are two well equipped and often expending a lot of energy. Cold is different to altitude, altitude is relatively un-escapable whilst cold can be mitigated by technologies dating back centuries.

I was broadly familiar with some of the material in this book from reading about attempts on Everest and Antarctic and Arctic expeditions but this work is much more focussed on the experiments than the men. I am contaminated with the knowledge that Heggie has worked with Simon Schaffer and felt that Higher and Colder has something of the style of Leviathan and the Air pump particularly the language around objects and artefacts, and their movement being about communication.

I found this a gentle introduction to the practice of historiography, it is related to the tales of adventure and individual heroism around scaling Everest and reaching the South Pole but quite different in its approach.