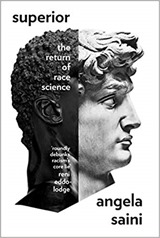 Next I turn to Superior: the return of race science by Angela Saini, having recently read Inferior by the same author. Inferior discusses how men of science have been obsessed with finding differences in all manner of human abilities on the basis of gender. Superior does the same for race.

In both cases largely male, white scientists spend inordinate amounts of time and effort trying to demonstrate the superiority of white males. There is a still pervasive view amongst scientists that what they do is objective and somehow beyond the reach of society. However, there is a a choice to be made in what is studied which goes beyond the bounds of science. Unlike Inferior, Superior reveals explicit funding and political support for racist ideas which stretch to the present day.

For Saini this is somewhat personal since she is of Indian origin, and considered a “Black member” by the NUJ. This highlights one of the core issues with race. The limited palette of races introduced in the 18th century ignored the huge variations across Africa and Indian to render the world down to White, Black, Indian, Chinese.

Furthermore the genetic variations within races, are bigger than those between races. Race was a construct invented long before we knew anything about genes, and it was a construct assembled for specific geopolitical purposes. The fundamental problem with race science is that it is literally skin deep, you might as well try to establish the superiority or otherwise of people having brown eyes, or red hair. The variations in genes amongst red-heads are as large as those between red-heads and blondes.

The account is historical, starting with the first “research” into race, when Britain, France and other countries where building empires by colonisation and the slave trade was burgeoning. It became important to rationalise the mistreatment of people from other countries, and race was the way to do it. White scientists neatly delineated races, and asserted that the white race was at the top of the pile, and thus had the right to take the land of other races, who were not using it correctly, and subjugate them as slaves.

Darwin’s work on evolution in the 19th century gave race science new impetus, white superiority could be explained in terms of survival of the fittest – a natural law. These ideas grew into the science of eugenics which had the idea of improving human stock through breeding. This wasn’t a science practiced in the margins, still renowned figures at the heart of statistics and biology were eugenicists.

Eugenics increased in importance prior to the Second World War but the behaviour of Hitler and the Nazis meant it fell out of favour thereafter. This is not to say race science disappeared. In 1961 a number of academics set up the journal Mankind Quarterly, funded by Wickliffe Draper’s Pioneer Fund. This had the appearance of a respectable academic journal but was in fact an echo chamber for what was essentially white supremacists. Similar echo chambers were set up by the tobacco and oil industries on for smoking and climate change. They look sufficiently like academic science to fool outsiders, and for politicians to cite them in times of need but the rest of their parent fields look on in horror. Mankind Quarterly is still published to this day, in fact within the last couple of years Toby Young was forced to resign as director of the Office for Students having attended meetings at University College London organised by Mankind Quarterly. University College London has a troubled relationship with race science.

This isn’t to say that all race science is maliciously racist. The human genome project led to plans to establish the diversity of the human species by sequencing the DNA of “isolated” groups, this typically meant indigenous people. Those promoting this diversity work were largely liberal, well-meaning if not somewhat paternalistic but their work was riven by ethical concerns and the natural concerns of indigenous people who they sought to sample.

Touching on origins Saini observes, once Neanderthal DNA was found in white Western Europeans the species experienced something of revival in reputation. Once a by-word for well, being Neanderthal, they are now seen as rather more sophisticated. It turns out the 10,000 year old Cheddar man was surprisingly dark-skinned certainly to Britons wishing to maintain their ancestry was white. The key revelation for me in this section was the realisation that large scale migration in prehistoric times was on on-going affair, not a one off. Waves of people moved around the continents, replacing and merging with their predecessors.

It has been observed that some races are prone to particular medical conditions (at least if they are living in certain countries, which should be a clue) therefore we seek a genetic explanation for these differences. This approach is backed by the FDAs approval of a drug combination specifically marketed to African Americans for hypertension. Essentially this was a marketing ploy. African Americans experience significant environmental challenges which are risk factors for hypertension, hypertension is a complex condition for which there is no simple genetic explanation.

Even for sickle cell anaemia, for which there is a strong genetic basis, using race as a proxy is far from ideal – the rate of the sickle cell anaemia gene varies a great deal across Africa and is also common in Saudi Arabia and India. A former colleague of mine from Northern Italy had the condition.

For a middle-aged white Western European male scientist Superior is salutatory reading. As for Inferior people men like me have repeatedly asked “What makes us so special?”, it is long past time to stop.