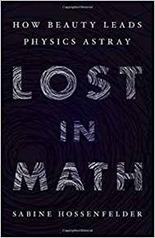 It is physics for my next read, although my background is in physics and chemistry I don’t read much physics. Lost in Math by Sabine Hossenfelder is a journey through modern fundamental physics and how it has lost its way over the last few years in a quest for beauty rather than relevance.

My background is actually in a different part of physics, the physics of squishy things like plastics, proteins and plants. I stopped being an academic physicist nearly twenty years ago but even at that time there was a definite feeling that some area of physics felt themselves superior to others. Experimental soft matter physicists, like myself, were at the bottom of the pile.

This background does mean that I’ve talked to actually string theorists about string theory, and been intrigued that when you asked them where the extra (20 or so) dimensions the theory requires were the fall back answer was always “curled up very small” – they were unable to express it differently.

The problem in fundamental physics is that theory is running well ahead of what can be experimentally confirmed. The Higgs boson found at CERN in 2012 was predicted in the early sixties, some 50 years previously. Gravitational waves, first observed in 2016, were predicted by Einstein 100 years previously. Theories today are generating hypotheses which may never be experimentally accessible, on current technology they require accelerators the size of galaxies and and Jupiter sized detectors.

With theory running so far ahead of experiment, how does one decide whether a theory is correct, an accurate model of the universe? The answer of choice for a number of years has been beauty, and naturalness. Distinctly unphysical concepts. Defining beauty is a difficult business, in physics as well as elsewhere. For physicists it means beautiful maths. I wonder whether there is a a link with music here, the Westerners have trained their ears to find particular note combinations harmonious or beautiful but in other traditions different combinations are considered beautiful. Naturalness is a related idea, which has a technical meaning, naturalness abhors taking one very large number from another very large number to leave a number of just the right size. What are the chances of that happening?

Hossenfelder embarks on a world tour to address these issues, talking to scientists across the US and Europe. The style of her writing is journalistic and confessional. This is refreshing to see in a book about physics.

An interesting point raised is that the point of a Kuhnian revolution is as much that our perception of beauty shifts when there is a paradigm shift, as anything else.

The pain for particle physicists is that there is this zoo of 25 particles from which all the matter we can see is constructed but they seem so arbitrary, there is no rhyme or reason to their masses or deep reason for their number. Really, particle physicists want an equation from which these features simply appear rather than find themselves in the position of having to set the values of masses and so forth. This is why physicists are physicists and not biologists or chemists. Chemists revel in mess, biologists are even worse.

The hope was that the LHC at CERN would reveal new particles after the Higgs boson, which would confirm that there was something beyond the Standard Model, this would provide some meat for them to gnaw at and the prospect of planning the next big facility to find out more. But so far there has been nothing, leaving particle physics at a loss.

Cosmology is suffering from a similar problem, although the problem in cosmology is linking up general relativity which explains black holes and the like with quantum mechanics. No one really knows what quantum mechanics means, just that it allows you to explain the values measured in certain experiments really well for reasons best not inspected too closely.

It is sometimes thought that scientists collect loads of data and then come up with a theory that explains it all, this hasn’t been the case in physics for a long time. For the best part of the last 400 years physics has been about coming up with plausible theories and checking to see if they are correct.

Hossenfelder finishes with some thoughts on other types of cognitive and social bias, and even provides an appendix of remedies to address them.

Lost in Math has the air of a disenchanted author making a final tour of the topic she loves before leaving for a job in industry, so it is heartening to find Hossenfelder still in fundamental physics. It seems to me that this level of introspection and the personal touch is something that is needed in academic research.

Fortunately for British readers the phrase “lost in math” is scarcely used in the text.