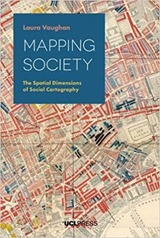 My next review is of Mapping Society: The Spatial Dimensions of Social Cartography by Laura Vaughan. This book covers four broad themes around mapping which are presented in the order in which they first occurred. As well as discussing contemporary material there is some re-analysis in terms of “space syntax”. This is a modern theory of urban spaces which measures things like accessibility and connectedness for road layouts. This feels very familiar to me since I use a similar approach to estimate the age of buildings on the basis of street layout.

The first theme is the disease map: maps of deaths due to disease, typically during epidemic outbreaks. Snow’s map of cholera deaths around the Broad Street pump in 1853 is the best known of these. His innovation was to use the map to identify the cause of cholera as being waterborne, and to use the map as a device for presenting his case. At the time the prevailing theory of disease was that it was airborne – the miasma theory. Snow’s map was not the first of its type though. Vaughan, wisely, doesn’t get into the discussion of the “first” such map but presents Seaman’s map of yellow fever deaths in New York, dating from 1797 as an early example. She cites a study finding 53 published maps of cholera deaths by 1832.

These maps of disease were used as to motivate the introduction of sanitation laws which became widespread during the middle years of the 19th century.

The second theme is poverty. Maps of disease often included data on sanitation and also poverty. Charles Booth’s work on London towards the end of the 19th century is the most notable in this area, his initial study was repeated 10 years later and then a further 30 years on in a separate survey. The novelty here was to measure levels of poverty in some sort of quantitative way, for this he is sometimes called the first social scientist. The fears of society at the time were that ” the poor” formed a cohesive mass that could rise up. Booth showed this was not the case, the poor were poor in many different ways and for different reasons. Poverty was often found in close proximity to wealth. Work like Booth’s was used to motivate changes in building regulation. Booth observed that irregularity of income was important as well as absolute level. One of the observations from this period is that areas of poverty, often identified at the scale of households, where correlated with inaccessibility – being off the beaten track. The poor were not found on the main streets but rather tucked away in poor housing set back behind better accommodation. New infrastructure such as canals and railways could introduce new pockets of inaccessibility – leading to poverty, or at least attracting the poor to areas thus cut off.

Booth’s work helped to motivate slum clearances and ultimately social security policies such as state pensions. Slum clearances proved to be a mixed benefit, all to often the slum is replaced with more desirable accommodation which displaces the original occupants to be replaced by the slightly more wealthy. The problems that the urban environment engenders can be very persistent. The spatial distribution of deaths in Paris due to cholera in 1849 are quite similar to those from the heatwave of 2003.

The third theme was nationality, race and immigration. These arose around the end of the 19th century, in both San Francisco’s Chinatown area, where the outcome was pretty malign in that Chinese immigration was banned and also in the East End of London, where there was a large influx of Jewish immigrants who came as a result of the Russian progroms. The book cites the Venice Jewish Ghetto, founded in the 16th century and where we get the word “ghetto” from. In the US there were maps of race, W.E.B. du Bois, himself an African-American pioneered this work in Philadelphia.

The final theme is crime, in fact much of this chapter is about licensed premises. In the latter half of the 19th century the drinking habits of the working classes were of intense concern. In the US this concern eventually led to Prohibition but both the UK and US had temperance movements. In the more distant past, public houses and bars served as the “front room” for poorer families. Their own homes were quite probably overcrowded, unheated and insanitary – the local pub was a warm pleasant place to spend any free time. They were also a place to find work, both legal and illegal.

Vaughan highlights that we don’t see maps of the form found in the 19th century in the late 20th century. Typically maps from this later period are on a larger scale, we don’t see data presented at such high spatial resolution but they cover a wider area. For example, the national census in the UK typically presents data at the Lower Super Output Area scale which covers approximately 1000 dwellings. Sometimes data is available at postcode level, such as the Police.UK crime data, a postcode will typically contain approximately 30 addresses. Devices such as mobile phones mean that high resolution data collection at scale is feasible with more modest resources than previously required. However, we would not publish the data in the manner of the 19th century maps because it is personal information, essentially maps such as Booth’s and Snow’s identify individuals including there health and wealth status.

Mapping Society is a beautifully produced book, with colour figures throughout rather than relegated to central pages, it gives some background to those iconic maps with which many of us are familiar.