My next review is of 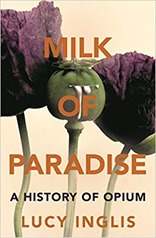 Milk of Paradise by Lucy Inglis. I’ve been following Lucy Inglis on twitter since before she was writing books, so you can’t treat this as an unbiased report.

Milk of Paradise is the story of opium. It is divided into three parts, covering opium itself, morphine and heroin. Morphine and heroin are derivatives of opium so this collective biography makes sense.

The first part takes us back to prehistoric times and the origins of the poppy from which opium is extracted. The opium poppies grown today are domesticated, there is no wild opium poppy. The ancestral flower comes from Turkey where cultivation started in about 10,000BC. Traces of poppy mixed with henbane, another imported plant used to counteract the side-effects of opium, have been found in Britain dating back to 4000BC, where it could have only appeared through long distance trade. It always surprises me how far goods were traded across the prehistoric world.

The chapter moves on through opium in Roman and Greek times where descriptions are somewhat vague, to the Arab physicians of the 12th and 13th century who were clearly using it for anaesthesia for quite complex surgery. Similar preparations were used in medieval Britain, such as dwale – a mixture of hemlock, opium and henbane in wine. These appear to have gone out of usage.

The next section covers the the global trade in opium, particularly into the Far East. This picks up on some of the themes of The Silk Roads by Peter Frankopan. Opium had been introduced to China by Arab traders in the 10th century. As ocean going ships come into widespread use in the 15th century trade increased with tea, coffee and spices coming to Europe in the early years of the 17th century. By the 18th century half the Batavian (modern day Jakarta) spice trade was actually in opium.

The second part of the book, notionally on morphine a derivative of opium, covers the medical uses of opium preparations and addiction. Growing wealth in the 18th century in Britain led to people with sufficient money to abuse alcohol – the Gin Craze. This was paralleled with increasing signs of addictive behaviour in the use of opium. It was a problem in China too which the Chinese authorities tried to address in the face of military action by the British to maintain their trade in opium. Something of a theme in the book is the shameful behaviour of the British over selling opium to China, much of the 20th century has been spent on battling the “illegal” drugs industry. The 19th century was just as bad but the illegal drugs industry was replaced by the “legal” British trade of opium to China, something China tried to stop repeatedly.

The final part of the book covers the 20th century, prohibition and the rise of organised crime and gangs in the supply of drugs. Prohibition of narcotics is a relatively recent innovation in the West, it arose during the early years of the 20th century driven by the US who convened the 1912 International Opium Convention from which international prohibition legislation is derived. One gets the feeling the addiction starts to be seen as a problem when it effects women. Opium and its derivatives had long been used in medicine but the second half of the 19th century saw the growth of the pharmaceutical company who saw benefits in new formulations of existing drugs, the invention of new drugs and the promotion in treating all manner of ailments.

The rise of morphine and heroin was facilitated by the introduction of the hypodermic needle which provided rapid action, and convenience. The downside of this was the increased risk of infection, and addiction.

Also in the 20th century we see how war drives medical innovation, such as ambulances to recover casualties in the First World War, new surgical techniques, new anaesthetic methodologies, new antibiotics and new facilities for delivering medical care as close to the “front line” as possible (like the MASH units of the Korean War. Prohibition and the involvement of Germany as the opposition led to supply problems in the First World War.

In the period between the wars Germany expended considerable effort in innovating new drugs, one gets the impression that both the Allied and Axis forces were fuelled by amphetamines and other stimulants. In fact, more generally, one gets the impression that a large chunk of humanity has got through life in a drug-induced haze from time immemorial.

The book finishes with chapters on Afghanistan and “heroin chic”, the use of narcotics in popular and artistic culture.

I found Milk of Paradise very readable, the division into parts is not strong, much of the second part continues to talk about opium whilst notionally the chapter is about morphine. It is opinionated to a degree, which is no bad thing.