As I finish work for the year, and we await Christmas Day, it is time for me to start writing my “Review of the year”. This is a somewhat partial view of the world, as seen through the pages of my blog which these days is almost entirely book reviews, you can see a list of my blog posts for the year here. My Goodreads account tells me I have read 32 books this year.

Linked to reading, I wrote a post on Women Writers – I’ve been making an effort to read more books written by women over the last couple of years. This has worked out really well for my fiction reading, where I’ve found some new sci-fi authors to enjoy, and some, like Ursula Le Guin who have been around a while. Le Guin’s The Left Hand of Darkness is certainly in contention for my favourite novel ever. On non-fiction I’ve not had as much success – a chunk of my non-fiction reading is in technology and the number of women published in this area is tiny. I found the acknowledgements section of books by men a useful place to find women to follow on twitter.

This year I read Pandora’s Breeches by Patricia Fara – about women in science from about 1600 to 1850. I also read Hidden Figures by Margot Lee Shetterly, about the Africa-American women who worked as “human computers” for the organisation which was to become NASA. I think this told me more about being an African-American than being a woman. I hadn’t appreciated previously the sheer effort and determination required for African-Americans to progress, changing the laws to end legally-sanctioned discrimination was simply the first step (resisted at every turn by white supremacists).

I read some fairly academic history of science too, Inventing Temperature and Leviathan and the air-pump. Inventing Temperature is about the history of the measurement of temperature. Temperature is important to most physical scientists in one way or another, perhaps more so for ones like I once was. This book covers the less-told history, and re-surfaces some of the assumptions that these days are no longer taught or certainly don’t stick in the mind.  Leviathan and the air-pump is about the foundation of the experimental method as it is (roughly) seen today. I liked these two books because they didn’t follow the “great man” narrative which is what you get from reading scientific biographies – a much more common genre in the wider history of science.

I also read a few books on the history of Chester, following on from reading about Roman Chester last year. Two things struck me in this, one was the image of post-Roman Britons living in the ruins of the Roman occupation. Evidence from this period immediately following the Roman occupation, in Chester it amounts to a thin dark layer of material in the Roman barracks which could well be pigeon droppings! The second stand out was the fact that Chester’s mint/money making operation was bigger than London’s in the 9th century. I was also interested in the “Pentice” a curious timber structure attached to the St Peter’s church by the cross in the centre of town that appears to have been Chester’s administrative centre since the medieval period (it was demolished in the early 19th century).

In news outside the world of books, we had an election in the UK, the result was a bit of a surprise but we can probably agree we are not in a great position now politically with a weak government steadfastly refusing to even countenance ending the Brexit process and an official “opposition” in the Labour Party supporting them in this.

Surprise hit of the year was the ARK exhibition of sculpture at Chester Cathedral. I wouldn’t describe myself as a connoisseur of art, particularly not sculpture but I loved this exhibition. The exhibits were scattered through the cathedral and its grounds. A life-sized ceramic horse, and three very large egg-shaped objects making a very public sign of what lay within. It turns out that sculpture works really well in an old cathedral, there are so many shapes and textures to pick up on. This picture encapsulates it for me: 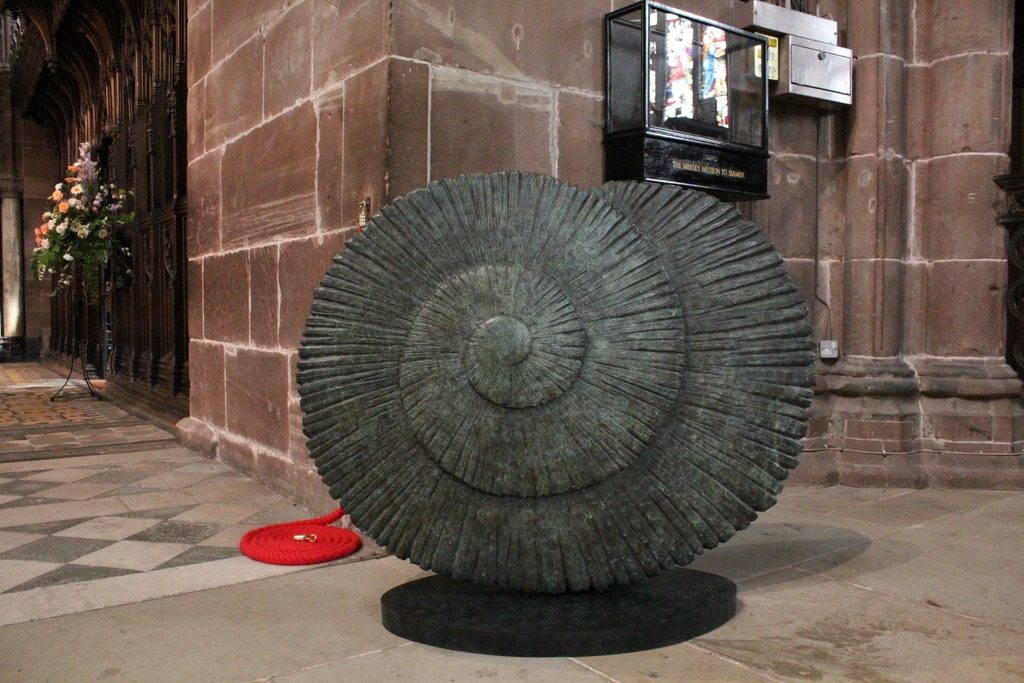 On the technology front I read about Scala, I’ve also wrote a post about setting up my work PC to use Scala which requires a bit of wrangling. I read about behaviour driven testing, and the potential downsides of data science from a social point of view and game theory.

A final mention goes to Ed Yong’s “I contain multitudes”, one of the first books I read this year, which is all about the interaction between microbes and the hosts they live with – including you and me. Possibly this is my favourite book of the year, but looking down the list I don’t think there was any book I regretted reading and a fair few of them were thoroughly excellent.

No holiday post this year, we were back in Portinscale, on the outskirts of Keswick again – notable achievement: getting Thomas (5) up several peaks – starting with Cat Bells! Embarrassment prevents from writing much about my Pokemon Go obsession, in my defence I will say that it is educational for Thomas and encourages him to walk places!