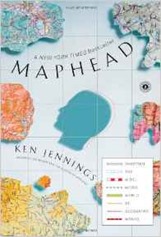 Maphead by Ken Jennings is a trip around various groups of people obsessed with maps and things geographic: collectors, makers of fantasy maps, geocachers, paper rally-ers,confluence hunters and so forth. It all makes me feel right at home!

The book starts with Jennings’ own obsession with maps. He pins his obsession to a move, at an early age, to South Korea with his family. His obsession is a plain, common or garden one with much poring over atlases and maps. He also likes toponymics, the naming of places. There are the somewhat obscene, such as Dildo, Newfoundland – my personal favourite of these is “Bresty Haw” (54.326750, –3.008447). There are also the commercial, such as Truth or Consequences in New Mexico. On a more serious note the US renamed a whole pile of places,to mildly less offensive variants such as “Dead Negro Draw”.

An early chapter discusses David Helgren’s 1983 quiz of his University of Miami students which found them to be pretty abysmal at finding even large places, such as Chicago on the map. There is much wailing and gnashing of teeth at this, bemoaning the state of education and in particular the lack of a firm grounding in geography. I was growing up in the early eighties and by that time the rote learning of places was somewhat passé, a private vice that some odd children engaged in. Geography became more the study of systems and ideas. Do we need to learn the capital of Mongolia by rote these days? Probably not, but there is a certain pleasure in knowing all of the US states or the capital cities of all the countries of the world.

The US has a National Geographic Bee where students from across the country compete to be the Queen Bee (or winner). The level of the competition seems pretty high to me. I was bemused to find the scoring scheme for the author’s own quiz at the very end of the book featuring grades of “Terrain Wreck” and “The Atlas Shrugs”.

Collectors of maps have their own chapter, I have ambivalent feelings about this. In some ways it’s just conspicuous consumption but, perhaps with all collecting of this type, is often linked with genuine expertise. Occasionally I have considered buying a complete set Ordnance Survey maps.

The highway obsessives are a group of which I was unaware. It turns out that there are people who photograph the signs on every junction of the US highway system. This has evolved into the Massacre Rally – armchair, map-based rallying! Here the players follower written questions to guide them across the country. Reading the web page I’m just a little bit tempted. The rally is based on the iconic Rand McNally road atlases which I was surprised to learn drove road signage in the US, its surveyors painted their own signage onto telegraph poles in the absence of any official markings.

Geocaching and confluence hunting get chapters of their own related to the travel clubs whose members aim to visit as many countries as possible. Geocaching came in to being when the selective availability on GPS was lifted in 2000, increasing the precision of position finding to domestic users by an order of magnitude, thereby allowing geocachers to share the coordinates of small, hidden caches with the reasonable expectation that they can be found using a GPS handset. Confluence hunters are related in that they visit locations with integer values of latitude and longitude.

The technology of maps has moved on significantly in my life time, GPS has shrunk to the size that it now fits into my watch. I can navigate to any place on earth in Google Maps, and see an overhead view, and for many locations I can also see a view from the street.This leads to interesting new games such as GeoGuessr – guess where you are from a Google Street View.

As an aside we also discover the origin of the idea of the 1:1 scale map, in Lewis Carroll’s novel Syvlie and Bruno which also introduces the idea of paintballing.

The book seems to miss my own personal obsession: filling maps with data. I spent many happy hours finding the triangulation points for Delambre and Mechain’s survey of the meridian through Paris to set the length of the metre. Or my maps of the 2010 General Election results. One of my current great pains is that the LIDAR maps the Environment Agency has released of England and Wales is the gaps in coverage. The absence of Scotland and Northern Ireland from the LIDAR coverage is an abomination in my eyes.

Maphead is a short read, not particularly challenging and a comforting reminder that there are other people like you (for certain values of you).