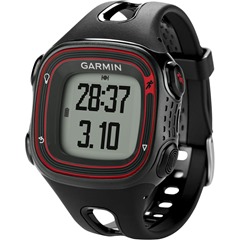 Over the last 8 months or so I’ve started running. Thomas has just turned four, and before he was born I used to go to the gym three times a week, this lapsed on Thomas’ arrival since life became so much busier. Long ago I used to run at school over middle distance, and I’m quite keen walker – so running isn’t an alien concept to me.

Feeling the need to lose a little bit of weight, I got nagged by the doctor about it whenever I visit, and also finding exercise good for my mental health, I got started. It’s telling that the first thing I did was get a GPS watch so I could record my running, I did this before buying a decent pair of trainers! This is just the right motivation for me: I can see where I’ve been on a map (tick) and I can collect data (tick)! As a consequence I ran a bit too enthusiastically to start off and wore myself out.

I got the Garmin Forerunner 10, this is a fairly basic GPS watch. It takes up to a couple of minutes to find location from GPS when you switch on. Then all I do is press go and run. It reports time and distance travelled in kilometers, and flashes up a lap time at the end of each mile. At the end of my run I upload the data to the Garmin Connect website where I can see where I’ve run on a map with timings and so forth, I get an animated winners cup when I break one of my records! It will do more complicated things but to be honest when I’m running I can’t be doing with fiddling around with a tiny display and the audible prompts it produces are pretty quiet.

Pain was any early problem, I had intense pain in my shins when I started running. This was fixed by buying some proper running shoes rather than simply using the Marks and Spencer’s trainers I’d fished out of the back of the cupboard. I got the new ones from Up and Running in Chester, who measured my gait on a treadmill with a video camera. It took a while before the pain subsided but now I sometimes get a rather atavistic feeling of being able to run for ever. This was how man won on the African savannah, he wasn’t a sprinter but he could keep going to the point his prey gave up, preferring to be eaten than run any further!

Collecting so much data, it’s obviously I must decorate this post with at least one chart. I didn’t aim for a big weight loss, I went from 85 Kg to 75kg. This means my belts all need an extra hole punching in them, and my waist has room to move in my trousers but I don’t need to replace my wardrobe. My general problem with losing more weight is that I see cake as a suitable reward to myself for losing weight, which is self-defeating. Mrs H rewards herself with sparkly nail varnish, I can’t say I’m not tempted to do the same. Below you see my weight loss over time, with a perceptible bump around Christmas wherein I converted Christmas cake efficiently to body mass. 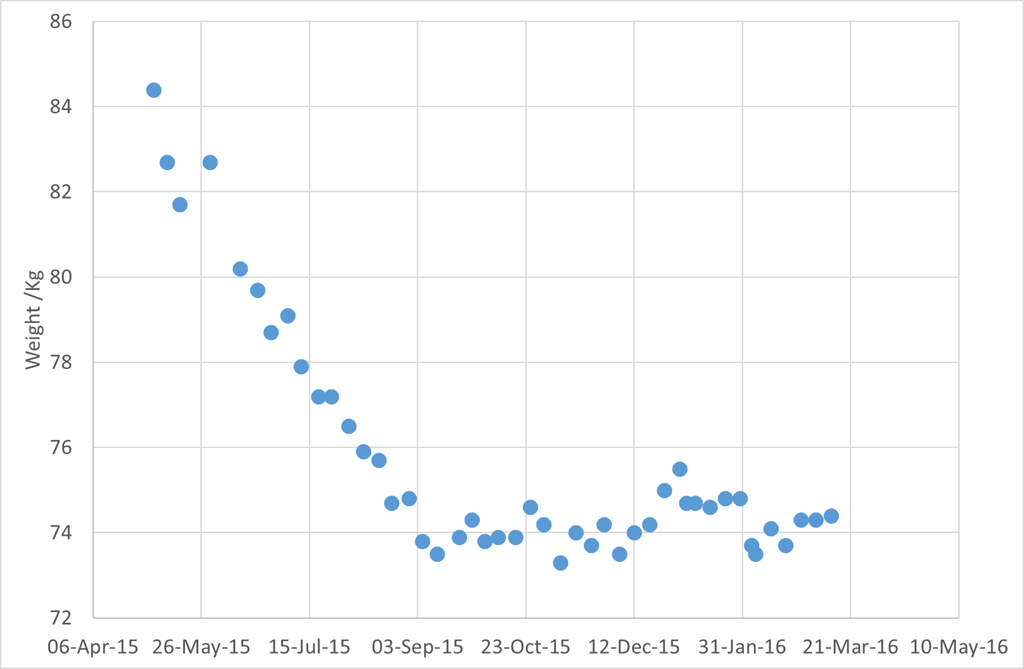 When I started running I was running for a bit then walking, running a bit more, walking. After about a month I was able to run for 5km without a break, I fairly regularly run 8km and once the weather and light has improved I may start doing a weekly 10km run, passing through Chester Zoo. I have some pleasant runs from my door, running along the Shropshire Union canal although in the depths of winter this became hazardous due to the dark, so I ran the suburban roads. It’s sad that my wife doesn’t feel safe to run along the canal at any time and the streets after dark.

You can see how my pace has quickened in the chart below showing my average time to run a mile. My increasing speed has tracked my loss in weight. I’ve been at a plateau for a while now. Interestingly, I started cycling 8 miles a day to and from work in November and this appears to have had no effect on my weight or speed. 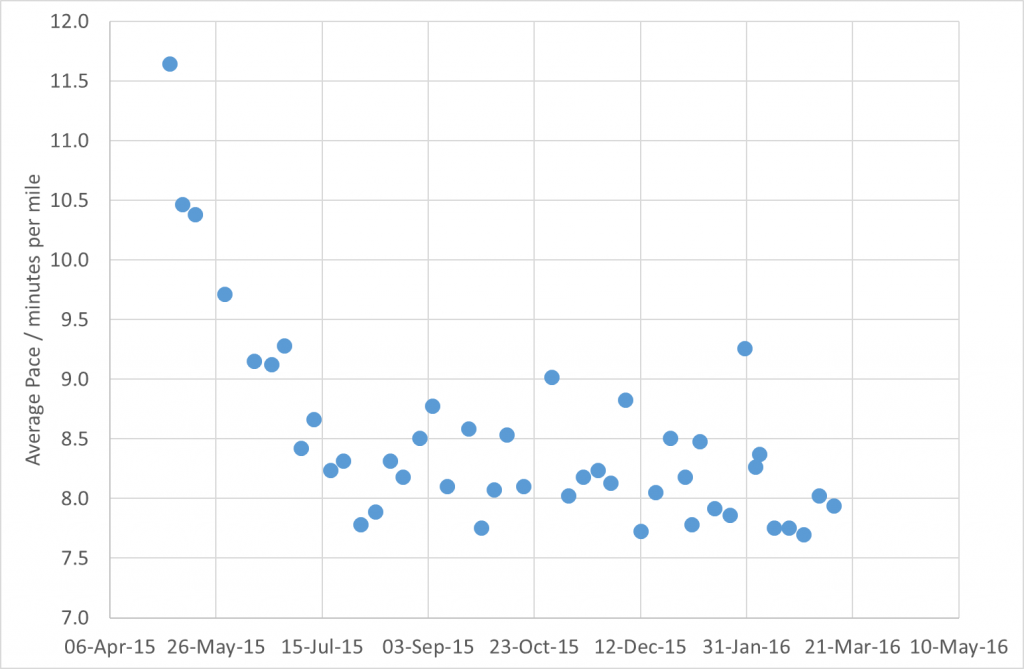