Parsing XML and HTML using xpath and lxml in Python

Book review: The Invention of Nature by Andrea Wulf 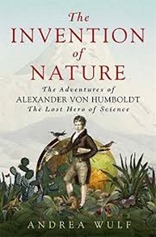 The Invention of Nature by Andrea Wulf is subtitled The Adventures of Alexander von Humboldt – this is his biography.

Alexander von Humboldt was born in Berlin in 1769, he died in 1859. The year in which On the Origin of Species was published. He was a naturalist of a Romantic tendency, born into an aristocratic family, giving him access to the Prussian court.

He made a four year journey to South America in 1800 which he reported (in part) in his book Personal Narratives, which were highly influential – inspiring Charles Darwin amongst many others. On this South American trip he made a huge number of observations across the natural and social sciences and was sought after by the newly formed US government as the Spanish colonies started to gain independence. Humboldt was a bit of a revolutionary at heart, looking for the liberation of countries, and also of slaves. This was one of his bones of contention with his American friends.

His key scientific insight was to see nature as an interconnected web, a system, rather than a menagerie of animals created somewhat arbitrarily by God. As part of this insight he saw the impact that man made on the environment, and in some ways inspired what was to become the environmentalist movement.

For Humboldt the poetry and art of his observations were as important as the observations themselves. He was a close friend of Goethe who found him a great inspiration, as did Henry David Thoreau. This was at the time when Erasmus Darwin was publishing his “scientific poems”. This is curious to the eye of the modern working scientist, modern science is not seen as a literary exercise. Perhaps a little more effort is spent on the technical method of presentation for visualisations but in large part scientific presentations are not works of beauty.

Humboldt was to go voyaging again in 1829, conducting a whistle-stop 15,000 mile 25 week journey across Russia sponsored by the government. On this trip he built on his earlier observations in South America as well as carrying out some mineral prospecting observations for his employers.

Despite a paid position in the Prussian court in Berlin he much preferred to spend his time in Paris, only pulled back to Berlin as the climate in Paris became less liberal and his paymaster more keen to see value for money.

Personally he seemed to be a mixed bag, he was generous in his support of other scientists but in conversation seems to have been a force of nature, Darwin came away from a meeting with him rather depressed – he had not managed to get a word in edgewise!

I’m increasingly conscious of how the climate of the time influences the way we write about the past. This seems particularly the case  with The Invention of Nature. Humboldt’s work on what we would now call environmentalism and ecology are highly relevant today. He was the first to talk so explicitly about nature as a system, rather than a garden created by God. He pre-figures the study of ecology, and the more radical Gaia Hypothesis of James Lovelock. He was already alert to the damage man could do to the environment, and potentially how he could influence the weather if not the climate. There is a brief discussion of his potential homosexuality which seems to me another theme in keeping with modern times.

The Invention of Nature is sub-subtitled “The Lost Hero of Science”, this type of claim is always a little difficult. Humboldt was not lost, he was famous in his lifetime. His name is captured in the Humboldt Current, the Humboldt Penguin plus many further plants, animals and geographic features. He is not as well-known as he might be for his theories of the interconnectedness of nature, in this area he was eclipsed by Charles Darwin. In the epilogue Wulf suggests that part of his obscurity is due to anti-German sentiment in the aftermath of two World Wars. I suspect the area of the “appropriate renownedness of scientific figures of the past” is ripe for investigation.

The Invention of Nature is very readable. There are seven chapters illustrating Humboldt’s interactions with particular people (Johann Wolfgang von Goethe, Thomas Jefferson, Simon Bolivar, Charles Darwin, Henry David Thoreau, George Perkins Marsh, Ernst Haeckel and John Muir). Marsh was involved in the early environmental movement in the US, Muir in the founding of the Yosemite National Park (and other National Parks). At first I was a little offended by this: I bought a book on Humboldt, not these other chaps! However, then I remembered I actually prefer biographies which drift beyond the core character and this approach is very much in the style of Humboldt himself.