Book Review: Stargazers–Copernicus, Galileo, the Telescope and the Church by Allan Chapman 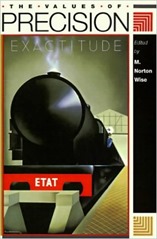 The Values of Precision edited by M. Norton Wise is a collection of essays from the Princeton Workshop in the History of Science held in the early 1990s.

The essays cover the period from the mid-18th century to the early 20th century. The early action is in France and moves to Germany, England and the US as time progresses. The topics vary widely, starting with population censuses, then moving on to measurement standards both linear and electrical, calculating methods and error analysis.

I’ve written some notes on each essay, skip to the end of the bullet points if you want the overview:

There is a lot in here which will speak to those with a training in science, physics in particular. The techniques discussed and the concerns of the day we will recognise in our own training. The essays hold a slight distance from practitioners in this arts but that brings the benefit of a different view. Core to which is the way in which precision in measurement is a social as well as technical affair. To propagate standards of measurement requires the community to build trust in the work of others, this does not happen automatically.

I like this style of presentation, each essay has its own character and interest. The range covered is much larger than one might find in a book length biography, and there is a degree of urgency in the authors getting their key points across in the space allocated.

In this book the various chapters do not overlap in their topics and cover a substantial period in time and space with the editor providing some short linking chapters to tie things together. All in all very well done.