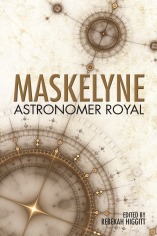 Over the years I’ve read a number of books around the Royal Observatory at Greenwich: books about finding the longitude or about people.

Maskelyne – Astronomer Royal edited by Rebekah Higgitt is unusual for me – it’s an edited volume of articles relating to Nevil Maskelyne by a range of authors rather than a single author work. Linking these articles are “Case Studies” written by Higgitt which provide background and coherence.

The collection includes articles on the evolution of Maskelyne’s reputation, Robert Waddington – who travelled with him on his St Helena trip, his role as a manager, the human computers used to calculate the tables in the Nautical Almanac, his interactions with clockmakers, his relationships with savants across Europe, his relationship with Joseph Banks, and his family life.

The Royal Observatory with its Astronomer Royal was founded by Charles II in 1675 with the goal of making astronomical observations to help with maritime navigation. The role gained importance in 1714 with the passing of the Longitude Act, which offered a prize to anyone who could present a practical method of finding the longitude at sea. The Astronomer Royal was one of the appointees to the Board of Longitude who judged applications. The observations and calculations done, and directed, from the Observatory were to form an important part of successful navigation at sea.

The post of Astronomy Royal was first held by John Flamsteed and then Edmund Halley. A persistent problem to the time of Maskelyne was the publication of the observations of the Astronomers Royal. Flamsteed and Newton notoriously fell out over such measurements. It seems very odd to modern eyes, but the observations the early Astronomers Royal made they essentially saw as their personal property, removed by executors on their death and thus lost to the nation. Furthermore, in the time of Maskelyne the Royal Observatory was not considered the pre-eminent observatory in Britain in terms of the quality of its instruments or observations.

Maskelyne’s appointment was to address these problems. He made the observations of the Observatory available to the Royal Society (the Visitors of the Observatory) on an annual basis and pushed for the publication of earlier observations. He made the making of observations a much more systematic affair, and he had a keen interest in the quality of the instruments used. Furthermore, he started the publication of the Nautical Almanac which provided sailors with a relatively quick method for calculating their longitude using the lunar distance method. He was keenly aware of the importance of providing accurate, reliable observational and calculated results.

He was appointed Astronomer Royal in 1765 not long after a trip to St Helena to make measurements of the first of a pair of Venus transits in 1761, to this he added a range of other activities which including testing the lunar distance method for finding longitude, the the “going” of precision clocks over an extended period and Harrison’s H4 chronometer. In later years he was instrumental in coordinating a number of further scientific expeditions doing things such as ensuring uniform instrumentation, providing detailed instructions for observers and giving voyages multiple scientific targets.

H4 is a primary reason for Maskelyne’s “notoriety”, in large part because of Dava Sobel’s book on finding the longitude where he is portrayed as the villain against the heroic clockmaker, John Harrison. By 1761 John Harrison had been working on the longitude problem by means of clocks for many years. Sobel’s presentation sees Maskelyne as a biased judge, favouring the Lunar distance method for determining longitude acting in his own interests against Harrison.

Professional historians of science have long felt that Maskelyne was hard done by Sobel’s biography. This book is not a rebuttal of Sobel’s but is written with the intention of bringing more information regarding Maskelyne to a general readership. It’s also stimulated by the availability of new material regarding Maskelyne.

Much of the book covers Maskelyne’s personal interactions with a range of people and groups. It details his exchanges with the “computers” who did the lengthy calculations which went into the Nautical Almanac; his interactions with a whole range of clockmakers for whom he often recommended to others looking for precision timepieces for astronomical purposes. It also discusses his relationships with other savants across Europe and the Royal Society. His relationship with Joseph Banks garners a whole chapter. A proposition in one chapter is that such personal, rather than institutional, relationships were key to 18th century science, I can’t help feeling this is still the case.

The theme of these articles is that Maskelyne was a considerate and competent man, going out of his way to help and support those he worked with. To my mind his hallmark is bringing professionalism to the business of astronomy.

In common with Finding Longitude this book is beautifully produced, and despite the multitude of authors it hangs together nicely. It’s not really a biography of Maskelyne but perhaps better for that.