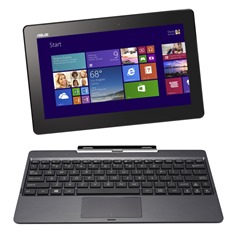 I’ve gone and bought another toy!

The Asus T100 Transformer is a full Windows 8.1 machine in a 10" form factor which will "transform" from a dinky notebook format to a freestanding tablet – all of the gubbins are in the display. I paid £309 for the 32GB 2014 model which has a slightly more powerful processor than the 2013 model.

The T100 really is a proper Windows 8.1 machine, only tiny. It includes Microsoft Office which works just as you would expect, and I installed Python(x,y) which is a moderate size install which I’d expect to fail on a system which wasn’t genuine, full Windows. I’ve also installed Picasa, my favourite photo collection software and that just works too.

The performance is pretty good for such a small package, things got a bit laggy when I ran a 1920×1080 display over the mini-HDMI port but not unusably so and that seemed to be more a display drive problem than a processor problem.

The modern OS experience differs from what went before, I used my Microsoft ID when setting up, and as if by magic my personal settings appeared on the T100 – including my familiar desktop wallpaper and the few apps I installed from the Windows app store. The same goes for Google Chrome – my default browser – once it knows who you are all your settings appear as if by magic.

I wrote a while back when I got my Sony Vaio that it seemed like Windows 8 was designed for the tablet form factor. And it sort of is. But I have the same feeling moving from my (Android) Nexus 7 to a Windows 8 tablet as I do when I move from a Windows 8 machine to a Mac. The new place is all very nice, and I’m sure I’d settle in eventually but it’s not the same. Windows 8 is still trying to be a desktop OS and a touch OS, and that just doesn’t work very well.

The T100 hardware is OK, the display looks fine and the latch/unlatch mechanism feels sturdy but the keyboard is a bit rattly. I would have liked to have had a more prominent "Windows” button on the display part in the style of an Android tablet. As it is there are three anonymous buttons on the display whose functionality I forget. Attaching and removing the keyboard kept me amused for a good half hour, the mechanism is reassuringly sturdy.

For me this form factor doesn’t really fit. I have a Nexus 7 tablet, which is lighter than the T100 for reading Kindle books on, Chromecasting to the TV (which I can’t do on the T100), browsing the internet or catching up on twitter. I have a Sony Vaio T13 ultrabook which is more useable as a laptop with it’s 13” display but is only a bit heavier. I’ve discovered I don’t need something of intermediate size!

Interestingly I have noted that I hold my 4 inch Nexus phone and 7 inch Nexus tablet at a distance such that their displays seem the same size, to match this feat with the T100 I would need arms like a gibbon!

I can see the T100 working as a travel system for someone with a chunky laptop or desktop, or as a tablet. It’s nice to have a backup machine for work and home.

I’m intrigued by the idea of installing Ubuntu on this machine, I have it in a virtual machine on my Sony Vaio, the process is described here but it’s a bit fiddly launching Windows and then the VM and the performance isn’t great. I find extensive instructions for installing Ubuntu on the T100 here, they look lengthy!

In summary, impressive to get a Windows laptop in such a small form factor and for such a reasonable price but it doesn’t really fit with my current devices except as a backup.