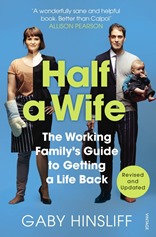 Half a Wife: The Working Family’s Guide to Getting a Life Back by Gaby Hinsliff, is a proposal as to how families can live their lives.

The title sacrifices clarity for a catchy headline. The “half a wife” is a reference to the fraction of her time Hinsliff wanted to be a full-time mother, or rather the collective target that she, and her husband would aim to achieve. Mrs SomeBeans and I have accidently hit this target – I work full time, Mrs SomeBeans works 2.5 days per week.

As a society we’ve moved away from the traditional family of a full-time employed (male) breadwinner and a full-time (female) housewife. This model used to be enforced firmly. In the early 1970s, when she fell pregnant with me, there was no question my mother would leave her job and wouldn’t be coming back. In fact when my brother and I were small, a local garage refused to give her a job application form because she had children. My mothers experience was not unusual. But by 1983 two thirds of mothers stayed at home to bring up their children, by 2010 only one third were doing so.

This shift is a result of a societal change with a macroeconomic benefit – more workers make a more productive economy. It has been facilitated and encouraged by government policy.

Half a wife addresses how we might cope with this change. It is written from the point of view of someone getting a “London premium” by moving out of London, whose reduced income just goes over the line into the upper rate of tax and who seems pretty talented. Things not available to all of us.

The book is based around interviews with a range of parents, focussed on how people organise their family life. This is rather useful since I suspect we are largely unaware of other people’s domestic arrangements, what might be possible. At times I felt Hinsliff must have been spying on us, so many things rang so true – the tensions over household chores, the boredom and frustrations of child rearing, the added stress of travelling for work with a child at home. I’d have welcomed an appendix collecting each of these stories, since as it stands they are scattered in fragments through the book.

I worked 4 days a week for a while, when Mrs SomeBeans was still on maternity leave. This was a cosy arrangement but when she returned to work and I looked after Thomas by myself for one day a week – I got bored. I feel ashamed to say it but it seems from Hinsliff’s book that I’m not alone. Financially, working an extra day a week didn’t make a great deal of difference. What I gained in salary I pretty much lost in nursery charges, and would have gone completely if we’d have taken on a cleaner. This does fit with a theme of the book, people – both men and women, value working life. So even if going to work is no better than cost neutral, many people will chose to work.

Hinsliff’s proposal for family life is the “half a wife” solution, a midway point between the traditional breadwinner/homemaker and two full-time employed model. The path to this proposal is not direct, it’s a combination of career, housing, childcare and schooling. A recurring theme of the book is that the family policy to support this proposal is not just for women. I like this sentiment.

The career side of the problem is covered by the “z-shaped trajectory”, with the horizontals representing those times when family takes over and the career goes on hold and the diagonals when things take off. I have to say this seems terribly well organised! My career has suffered from a lack of a master plan. My earliest guide was my dad, who worked for the same organisation for his entire working life. I had a spell working on short term contracts in academia before gaining tenure, then gave it all up to work for Unilever for a period. Most recently I joined a startup in Liverpool, it’s only with this most recent move that I’ve started to appreciate that I’ve got marketable skills. The policy support here is in pushing companies to allow more flexible working, for both women and men.

Housing forms another part of the jigsaw puzzle, housing costs in the UK are high, particularly where there are jobs. Long commutes to work are both bad in themselves for employee happiness, and damaging for family life. Housing is a difficult bullet to bite there is a tacit agreement that house prices are too high. But bringing them down means a large block of voters will lose out.

Childcare is a second leg of the problem, I must admit I look with envy on other couples mentioned in the book who get support from conveniently located family. Schooling has some part to play here, for working families a school day shorter than a working day presents a childcare challenge. Even worse, the long summer holidays, originally designed to support the use of children as an agricultural labour force.

Half a wife helps answer the question: “how do I be a grown-up?”  for which I’ve never felt well-prepared. Doubly so when it came to fatherhood and how it fitted with work, and my previous life. It’s well researched and readable. I wish I’d read it before I entered adult life!