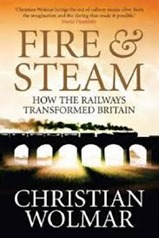 I’ve long been a bit of a train enthusiast, reflected in my reading of biographies of Brunel and Stephenson, and more recently Christian Wolmar’s The Subterranean Railway about the London Underground. This last one is my inspiration for reading Wolmar’s Fire & Steam: How the railways transformed Britain which is a more general history of railways in Britain.

The railways appeared at a happy confluence of partly developed technologies. In the later half of the 18th century the turnpike road system and canal systems were taking shape but were both limited in their capabilities. However, they demonstrated the feasibility of large civil engineering projects. Steam engines were becoming commonplace but were too heavy and cumbersome for the road system and the associated technologies: steering, braking, suspension and so forth were not yet ready. From a financial point of view, the railways were the first organisations to benefit from limited liability partnerships of more than six partners.

Wolmar starts his main story with the Liverpool & Manchester (L&M) line, completed in 1830, arguing that the earlier Stockton & Darlington line (1825) was not the real deal. It was much in the spirit of the earlier mine railways and passenger transport was a surprising success. The L&M was a twin-track line between two large urban centres, with trains pulled by steam engines. Although it was intended as a freight route passenger transport was built in from the start.

After a period of slow growth, limited by politics and economics, the 1840s saw an explosion in the growth of the railway system. The scale of this growth was staggering. In 1845 240 bills were put to parliament representing approximately £100million of work, at the time this was 150% of Gross National Product (GNP). Currently GNP is approximately £400billion, and HS2 is expected to cost approximately £43billion – so about 10% of GNP. Wolmar reports the opposition to the original London & Birmingham line in 1832, it sounds quite familiar. Opposition came from several directions, some from the owners of canals and turnpike roads, some from landowners unwilling to give up any of their land, some from opportunists.

The railways utterly changed life in Britain. At the beginning of the century travel beyond your neighbouring villages was hard but by the time of the Great Exhibition in 1851, a third of the population was able to get themselves to London, mostly by train. This was simply a part of the excursion culture, trains had been whizzing people off to the seaside, the races, and other events in great numbers from almost the beginning of the railway network. No longer were cows kept in central London in order to ensure a supply of fresh milk

In the 19th century, financing and building railways was left to private enterprise. The government’s role was in approving new schemes, controlling fares and conditions of carriage, and largely preventing amalgamations. There was no guiding mind at work designing the rail network. Companies built what they could and competed with their neighbours. This led to a network which was in some senses excessive, giving multiple routes between population centres but this gave it resilience.

The construction of the core network took the remainder of the 19th century, no major routes were built in the 20th century and we have only seen HS1, the fast line running from London to Dover completed in this century.

The 20th century saw the decline of the railways, commencing after the First World War when the motor car and the lorry started to take over, relatively uninhibited by regulation and benefitting from state funding for infrastructure. The railways were requisitioned for war use during both world wars, and were hard used by it – suffering a great deal of wear and tear for relatively little compensation. War seems also to have given governments a taste for control, after the First World War the government forced a rationalisation of the many railway companies to the “Big Four”. After the Second World War the railway was fully nationalised. For much of the next 25 years it suffered considerable decline, a combination of a lack of investment, a reluctance to move away from steam power to much cheaper diesel and electric propulsion, culminating in the Beeching “rationalisation” of the network in the 1960s.

The railways picked up during the latter half of the seventies with electrification, new high speed trains and the InterCity branding. Wolmar finishes with the rail privatisation of the late 1990s, of which he has a rather negative view.

Fire & Steam feels a more well-rounded book than Subterranean Railway which to my mind became a somewhat claustrophobic litany of lines and stations in places. Fire & Steam  focuses on the bigger picture and there is grander sweep to it.