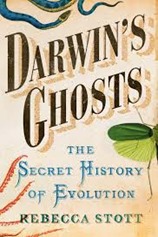 Charles Darwin’s On the Origin of Species was rushed into print after a very long gestation when it became clear that Alfred Russell Wallace was close to publishing the same ideas on evolution. Lacking from the first edition was a historical overview of what went before, pertinent to the ideas of evolution. On the occasion of the publication of the first American edition, Darwin took the opportunity to address the lack. Darwin’s Ghosts: In search of the first evolutionists by Rebecca Stott is a modern look at those influences.

After an introductory, motivating chapter Darwin’s Ghosts works in approximately chronological order.  Each chapter introduces a person, or group of people, who did early work in areas of biology which ultimately related to evolution. The first characters introduced are Aristotle, and then Jahiz, a Persian scholar working around 860AD. Aristotle brought systematic observation to biology, a seemingly basic concept which was not then universal. He wrote The History of Animals in about 350BC. The theme of systematic observation and experimentation continues through the book. Jahiz extended Aristotle’s ideas to include interactions of species, or webs. His work is captured in The Book of Living Beings.

Next up was a curiosity over fossils, and the inklings that things had not always been as they were now. Leonardo Da Vinci (1452-1519) and, some time later, Bernard Palissy (1510-1590) are used to illustrate this idea. Everyone has heard of da Vinci. Palissy was a Hugenot who lived in the second half of the 16th century. He was a renowned potter, and commissioned by Catherine de Medici to build the Tuileries gardens in Paris but in addition he lectured on natural sciences.

I must admit to being a bit puzzled at the introduction of Abraham Trembley (1710-1784), he was the tutor of two sons of a prominent Dutch politician. He worked on hydra, a very simple aquatic organism and his wikipedia page credits him as being one of the first experimental zoologists. He discovered that whole hydra could regenerated from parts of a “parent”.

Conceptually the next developments were in hypothesising a great age for the earth coupled to ideas that species were not immutable, they change over time. Benoît de Maillet (1656-1739) wrote on this but only posthumously. Similarly Robert Chambers (1802-1871) was to write anonymously about evolution in Vestiges of the Natural History of Creation first published in 1844. Note that this publication date is only 15 years before the first publication of the Origin of Species.

The reasons for this reticence on the part of a number of writers is that these ideas of mutability and change collide with major religions, they are “blasphemous”. This becomes a serious issue over the years spanning 1800. Erasmus Darwin, Charles’s grandfather, was something of an evolutionist but wrote relatively cryptically about it for fear of his career as a doctor. I reviewed Desmond King-Hele’s biography of Erasmus Darwin some time ago. At the time when Erasmus wrote evolution was considered a radical idea, both in political and religious senses. This at a time when the British establishment was feeling vulnerable following the Revolution in France and the earlier American revolution.

I have some sympathy with the idea that religion suppressed evolutionary theory, however it really isn’t as simple as that. The part religion plays is as a support to wider cultural and political movements.

The core point of Darwin’s Ghosts is that a scientist working in the first half of the 19th century was standing on the shoulders of giants or at least on top of a pile of people the lowest strata of which date back a couple of millennia. Not only this, they are not on an isolated pinnacle, around them are others also standing. Culturally we are fond of stories of lone geniuses but practically they don’t exist.

In fact the theory of evolution is a nice demonstration of this interdependence – Darwin was forced to publish his theory because Wallace had essentially got the gist of it entirely independently – his story is the final chapter in the book. For Wallace the geographic ranges of species were a key insight into forming the theory. A feature very apparent in the area of southeast Asia where he was working as a freelance specimen collector.

Once again I am caught out by my Kindle – the book proper ends at 66% of the way through, although Darwin’s original essay is included as an appendix taking us to 70%. Darwin’s words are worth reading, if only for his put-down of Richard Owen for attempting to claim credit for evolutionary theory, despite being one of those who had argued against it previously.

I enjoyed this book, much of my reading is scientific mono-biography which misses the ensemble nature of science which this book demonstrates.