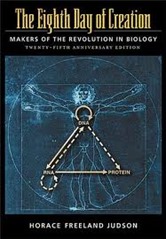 My reading moves seamlessly from the origins of cosmology (in Koestler’s Sleepwalkers) to the origins of molecular biology in “The Eighth Day of Creation” by Horace Freeland Judson. The book covers the revolution in biology starting with the elucidation of the structure of DNA through to how this leads to the synthesis, by organisms, of proteins – this covers a period from just before the Second World War to the early 1960s although in the Epilogue and Afterwords. Judson comments on the period up to the mid-nineties. Although the book does provide basic information on the core concepts (What is DNA? What is a protein?), I suspect it requires a degree of familiarity with these ideas to make much sense on a casual reading – the same applies to this blog post.

The first third or so of the book covers the elucidation of the structure of DNA. Three groups were working on this problem – that of Linus Pauling in the US, Franklin and Wilkins at Kings College in London and Crick and Watson in Cambridge. Key to the success of Crick and Watson was their collaboration: a willingness to talk to people who knew stuff they needed to know, and piecing the bits together. The structural features of their model were the helix form (this wasn’t news), specific and strong hydrogen bonding between bases, and the presence of two DNA chains (running in opposite directions). On the whole this wasn’t a new story to me, although I wasn’t familiar with the surrounding work which established DNA as the genetic material. Judson returns to the part Rosalind Franklin in the discovery in one of the Afterwords. It has been said that Franklin was greatly wronged over the discovery of DNA, but Judson does not hold this view and I tend to agree with him. The core of the problem is that the Nobel Prize is not awarded posthumously, and with her death at 37 from cancer, Franklin therefore missed out. Watson’s book The Double Helix was a rather personalised view of the characters involved most of whom were alive to carry out damage limitation, whilst Franklin was not – so here she was poorly treated but by Watson rather than a whole community of scientists. Perhaps the thing that said the most to me about the situation is that after she was diagnosed with cancer she stayed with Cricks at their home.

In parallel with the elucidation of the structure of the DNA work had been ongoing with understanding protein synthesis and genetics in viruses and bacteria. This included both how information was coded into DNA, with much effort expended in trying to establish overlapping codes. There are 20 amino acids and four bases in DNA, so three base pairs are required to specify an amino acid if the amino acid sequence is to be unconstrained but it was conceivable that two consecutive amino acids are coded by fewer than 6 base pairs but in this case there is a restriction on the possible amino acid sequences. This area was initiated by the physicist, George Gamow. I struggle a bit to see how it gained so much traction, this type of model was quickly ruled out by consideration of the amino acid sequences that we being established for proteins at the time. It turns out that amino acids are coded by three consecutive base pairs with redundancy (so several different base pair triplets code for the same amino acid). Also covered was the mechanism by which data passed from DNA to the ribosomes where protein synthesis takes place, important here are adaptor molecules which carry the appropriate amino acid to the site of synthesis.

Compared to the structure of DNA this work was a long difficult slog, involving intricate experiments with bacteria, bacteriophage viruses, bacterial sex, ultracentrifugation, chromatography and radiolabelling.

The final part of the book is on the elucidation of the structure of proteins, this was done using x-ray crystallography with the very first clear scattering patterns measured in the 1930s and the first full elucidation made in the late fifties. X-ray crystallography of proteins, containing many thousands of atoms is challenging. Fundamentally there is a issue, the “phase problem”, which means you don’t have quite enough information to determine the structure from the scattering pattern. This issue was resolved by heavy atom labelling, here you try to chemically attach a heavy atom such as mercury to your protein then compare the scattering pattern of this modified protein with that of the unmodified protein, which resolves the phase problem. Nowadays measuring the thousands of spots in an x-ray scattering pattern and carrying out the thousands and thousands of calculations required to resolve the structure is relatively straightforward but in the early days it was a massive manual labour.

As well as resolving structure a key discovery was made regarding the mode of action of proteins: essentially they work as adaptors between chemical distinct systems – when a molecule binds to one site on a protein it effects the ability of another type of molecule to bind to another site on the protein through changes in the protein structure induced by the first molecule’s binding. This feature opens up huge possibilities for cell biology – in the absence of this feature interactions between chemical systems can only occur if the participants in those systems interact with each other chemically.

It isn’t something I’d really appreciated properly but molecular biologists are quite organised in the organisms that they generally agree to work on. The truth is that there are uncountably many viruses and so to aid the progress of science one needs to select which ones to study: E. Coli, the T series bacteriophages, C. Elegans, D. Melanogaster and more recently the zebrafish, they almost play the part of an extra author.

Molecular biology was apparently dominated by physicists, I must admit I found this confusing in the past but Judson highlights the field as defined by its practioners: biochemistry is about energy and matter (and typically small molecules), molecular biology is about information (and typically macromolecules) – a more natural home for physicists.

I found the first and third parts an enjoyable read, my scientific background is in scattering so the technical material was at least familiar the central section on genetics I found fascinating but a bit of a slog. I’m somewhat in awe of the complexity of the experiments (and their apparent difficulty).

Looking back on my earlier book reviews, I read my comment on R.J. Evan’s book on historiography that history is a literary exercise as well as anything else, as a trained scientist this was something of an alien concept but in common with Koestler’s book the style of this book shines through.