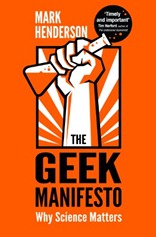 This review is of Mark Henderson’s book “The Geek Manifesto: Why Science Matters“. It starts with Simon Singh’s lengthy libel battle with the British Chiropractic Association, which sets the scene for the rest of the book.

In some senses this is a book about “my people”, many of the events described were ones I watched unfold online. For example, I wrote back here, about David Nutt’s sacking from the Advisory Council on the Misuse of Drugs. I remember the Boots 10:23 homeopathy protests in which geeks overdosed on homeopathic remedies, I even got ever so slightly involved in Science is Vital. The acknowledgements go out to many people I follow on twitter, and the links to other books I have read, “Adapt” by Tim Harford and “Bad Science” by Ben Goldacre, are explicit. I’d also add “Freakonomics” by  Steven D. Levitt and Stephen J. Dubner to this genre.

After the opening Simon Singh case there are chapters on the role of science in politics, government, the media, the economy, education, court, healthcare, and environmentalism. Random fact I picked up: only two scientists have appeared on the BBC Question Time programme in the last 8 years – somewhat shocking given the wide roster of the great and the good who appear on the programme. I liked the practical examples of reducing crime in Cardiff, led by Professor Jonathan Sheperd, a maxillofacial surgeon frustrated and distressed by the number of young people admitted through Accident and Emergency with severe cuts from pub brawls. He collected detailed evidence of incidents which he passed on to police, later publishing research on the outcome of this approach by comparison with a similar city without such intervention.

I also liked the stories from the University of Southampton on fibre optic research and Shankar Balasubramanian (at Cambridge University), whose gene sequencing company, Solexa was recently acquired for $600million. Too often scientists make the public assertion that spending money on research benefits the economy, but then say that you can’t possibly direct them into particular areas of research – the old blue skies argument on which I blogged here and here. These case studies are convincing on the benefits of longer term, university-based research.

The section on climate change and environmentalism fits somewhat with my opinions – in principle I am green but find the official face of the environmental movement (Greenpeace, Friends of the Earth, the Green Party, The Soil Association) difficult because they go beyond the environment to an anti-capitalist world view in which good science is optional; particularly in campaigns against genetically modified crops and nuclear power. However I don’t believe the Greens can be blamed for the, typically, right-wing opposition to the consensus on anthropogenic  climate change. I wrote a bit about climate change here. This also touches a little on the Sense About Science organisation, one mentioned several times through the book, they are no doubt useful but I have my suspicions about some of their positions, particularly on climate change – this article in The Skeptic captures some of that unease.

The book is very well described as a manifesto: it’s aimed at the geeks of the title. It picks up on a theme of increased levels of activism amongst scientists, a growing skeptic movement and the newly formed comedy / science intersection (Dara O’Brien, Robin Ince and so forth). I’m a scientist, I’ve been a scientist for 20 or so years, and I’m undeniably geeky – I write programs for fun, yet I find the “geek” label uncomfortable.

There has been a twitter campaign to send this book to every single MP, all I can say is I hope they don’t read the second chapter. Henderson, a historian by training, seems rather overwhelmed by the forensic powers of scientists and dismisses the idea that anyone else might have them. I think his attitude is summarised in his reference to introducing more scientists to parliament which will apparently

“…rapidly raise the game of the non-scientists around them”

I’m a scientist, and I find this embarrassingly patronising. His remedy for bad science in the media is rather more subtle and nuanced than his approach to politicians. I think in the end, in politics, he highlights some of the important things – the need to engage with MPs rather than leave it to others; the need to engage early when positions are not set in stone and the need to recognise that MPs face other pressures: a recent Early Day Motion in support of homeopathy is a case in point: many MPs signed because they believed, that many of their constituents were passionately in favour of it, the support of Prince Charles probably helped them with their decision too.

The Behavioural Insights Unit in the Cabinet has a recent paper “Test, Learn, Adapt: Developing Public Policy with Randomised Controlled Trials” by Laura Haynes, Owain Service, Ben Goldacre and David Torgerson (pdf) which is exactly the approach to government that Henderson is promoting. It perhaps highlights that a frontal assault on MPs is not the way in: the civil service is important. A second strand, which I would propose, is casting the whole experimenting thing into a business context. One of my own political preferences is for governments that do things competently (regardless of political tendency), in business this might be labelled something like “Excellent Execution”. Doing things competently isn’t a particular skill of scientists: it’s something everyone can aspire to, and scientists by no means have a monopoly on the routes to competence, or even universally exhibit themselves.

Once again, I am tricked by Kindle – the text of this book ends at about 60%, it is very heavily referenced!