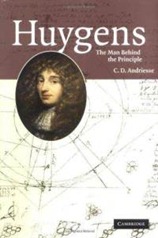 This post is a review of C.D. Andriesse’s biography “Huygens: The Man Behind the Principle”. Huygens Principle concerns the propagation of light but he carried out a wide range of research, including work on clocks, Saturn (discovering its moon “Titan” and hypothesizing the existence of its rings), buoyancy, circular motion, collisions, musical scales and pendulums. Huygens has made passing appearances in my blog posts on the French Académie des Sciences, on telescopes and also on clocks.

On the face of it is surprising that he is not better known, looking around for biographies of him one finds a rather short list. Andriesse puts this down to much of the personal documentation being in Dutch. The scientist in me feels there should be some quantitative way of measuring how “well known” a historical figure is now, and how “important” they were – I suspect this is an impossible programme. On completing the book I suspect a couple of factors play a part here: Huygens represents something of a transitional figure between the work of Galileo/Descartes, and Newton/Leibniz. Similarly his practical work on clocks and telescopes was impressive for its time but superseded not long thereafter. What we do now in physics owes much more to Newton than to Galileo, furthermore Newton although not prolific published more promptly than Huygens and was President of the Royal Society for 20 or so years before his death in post, whilst Huygens left L’Académie des Sciences sometime before his death in not particularly auspicious circumstances. It isn’t entirely clear whilst reading the book, but it becomes obvious that frequently Huygens’ work was done over long periods and only published quite a long time after it was started, often posthumously.

Huygens was born in the Hague in 1629 and died 1695. Christiaan Huygens’ father, Constantijn was a senior Dutch diplomat and a regular correspondent with René Descartes. Constantijn also met Francis Bacon (and was clearly impressed by him), Bacon and Descartes were important in shaping the development of science in the early 17th century. Bacon in particular set the scene for the way of doing science both in the Royal Society and  L’Académie des Sciences. Constantijn set his son off on a regime of study in the classics, with a view to him becoming a lawyer and following in his footsteps as a diplomat. Sometime around 1643, when Christiaan was 14 years old he started to show promise in mathematics.

Huygens senior provided introductions to Marin Mersenne who introduced him to those circles who became the Académie des Sciences in France. Christiaan Huygens was a paid director of science at L’Académie from its foundation in 1666 until he was excluded from it shortly after the death of Jean-Baptiste Colbert, founder of the organisation and his principle patron, in 1683. The exclusion arose from a combination of the loss of this patron, religious differences, absence due to illness, personal vendettas, opposition to membership of any foreigner and his demand for higher remuneration. Aside from this period at L’Académie, Huygens appears to have lived on the wealth and position of his father.

There’s no doubt that he made significant contributions in the area of mechanics, going beyond what Galileo and Descartes had done but his work was superseded almost immediately by that of Newton, and Leibniz, particularly in the methods of calculus which they developed. Calculus is a tool which makes much of the complex geometrical work that Huygens did obsolete. Leibniz was an informal pupil of Huygens, and they kept up a lengthy correspondence. He also had some exposure to Isaac Newton via the Royal Society.

Andriesse claims that Huygens wrote the first physics formula, relating to collisions. I think we should probably take this with a pinch of salt, but looking at the work he did do on circular motion, collisions, buoyancy, the motion of the pendulum and the shape of a catenary as well as his work on optics it is all very familiar to those that studied physics (at least to the age of 18).

Alongside his mathematical and theoretical physics work, Huygens also made contributions to the development of both clocks and telescopes. He introduced the pendulum clock, and a design of his was tested for determining the longitude by the Dutch East India Company. In practical terms this was not successful but it was a valiant first try. He also made lenses and constructed his own telescopes, here he appears to have been a competent technician and an able theoretician but not reaching the level of Newton, who constructed his own reflecting telescope – the first practical example of its type which was not exceeded for some 30 years or so.

This is a detailed biography of Huygens, drawing heavily on his personal correspondence and covering his scientific achievements in some depth, in the manner of Abraham Pais biography of Einstein. Although the book is pretty readable, the style is odd in places – Huygens is referred to frequently as “”Titan” without any real explanation as to why – it may be that in the original Dutch version, entitled “Titan kan niet slapen” (“Titan can not sleep”) this is a bit more obvious. The author also throws in the odd “Iris” when referring obliquely to sex (at least I think that’s what he’s doing!). Occasionally bits of information are scattered through the text, so we learn when Huygens is born and only 10 pages later do we learn where. There is no strong distinction of when Huygens started working on a publication and when it was actually published.

Perhaps more seriously Andriesse makes an attempt at Freudian analysis of some of Huygens illness, I’m no expert in this but I suspect this approach would be considered out-dated these days. It is also here that the translation perhaps wobbles a bit, with Huygens described as having “symptoms of the hypochondriac” which I think may be a mistranslation of melancholia hypochondriaca which I believe refers more generally to mental illness than the specific modern “hypochondria”.

This said, Andriesse’s biography of Huygens is well worth reading. Christiaan Huygens himself is an interesting subject who made important scientific discoveries across a range of areas.

My Evernotes for the book are here.