First light–images of the sun 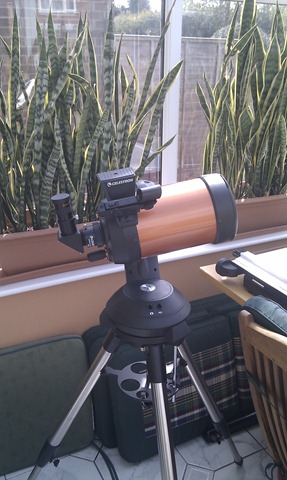 This is a brief overview of my shiny new purchase: a Celestron NexStar 5SE telescope. As an experiment I have also embedded a video review (here), I should also point out that so far cloud cover has meant the only celestial object I have observed is the sun (using the appropriate safety measures).

I bought my ‘scope from Sherwood’s, who I am happy to recommend for their good prices, and quick and efficient service. My purchase list was as follows:

The mount is powered, the add-on battery pack seemed like the best option for providing that power conveniently. I have a Canon 400D SLR camera which I wanted to use with the telescope, the piggyback mount lets me put the camera on top of the optical tube and simply use it to point the camera at the sky. The T-mount assembly allows me to use the telescope as a camera lens, albeit without auto-focus and aperture.

The solar filter is essential if you want to look at the sun, and I got the impression a moon filter was useful for dimming the brightness of the moon, photographers will know that when photographing the moon the exposure time is as if for a rock sitting in full sun, which is exactly what it is!

The 5SE is a Schmidt-Cassegrain telescope with a 125mm (5 inch) primary mirror, a focal length of 1250mm and an overall F/ratio of 10. “Schmidt-Cassegrain” means that the open end of the tube has a corrector plate (Schmidt’s contribution) and light is focussed by a large concave primary mirror and a smaller convex secondary mirror in the centre of the corrector plate. The image is viewed through an eyepiece in the back of the optical tube, behind the primary mirror. In practical terms it also means the telescope has a very short tube length making it more portable than similarly specified telescopes. The whole assembly is easy to pick up and carry in its deployed state, and the optical tube in particular was well-packed on delivery forming the basis of a useful carrycase.

The telescope is supplied with a 25mm focal length eyepiece which gives a magnification of x50, the maximum useful magnification of the telescope should be x300 with appropriate eyepiece. Focus is achieved by turning a knob on the back plane of the telescope tube, which moves the primary mirror. The eyepiece is attached to a periscope (Star Diagonal in Celestron’s parlance) to give a more comfortable viewing position. The finderscope is a Celestron Star Pointer, which is a non-magnifying window with an LED spot projected to the middle for guiding, it took me a little while to get the hang of this but I can see the benefit of a low magnification finderscope.

The telescope is on a computerized alt-azimuth mount which also includes an equatorial wedge (like the equatorial platform), meaning that the rotational motion of the mount can be made co-axial with that of the earth – allowing un-rotated tracking of objects through the sky for astrophotographic purposes. The controller is a handset device on a cord, in night time operation the telescope can be aligned to the night sky by pointing it to three different stars, after which it will goto any one of a huge catalogue of celestial objects selected using the handset.

The optical tube feels nice and chunky, although the finderscope is a bit plasticky. The piggyback mount attaches using the same mounting holes as the finderscope, the finderscope then bolts back on top, I did a bit of tweaky of the screws along with adjustments on the finderscope to get it aligned. I have achieved fine views of my neighbours chimney pot!

There is a battery compartment in the mount which takes 8xAA batteries, reading on the internet I understand the lifetime for this set is about 30 minutes in operation, which is why I got both a mains adaptor and a 3rd party battery pack. I suspect I’ll mainly use the add-on battery pack for the convenience of fewer trailing leads. The mount doesn’t operate without power, which is a bit of a drawback, the telescope can be tilted but not rotated. The mount sits on top of a nice chunky tripod, to which it is attached by three screws, so in principle you could make yourself a “manualised” version by sitting the scope on a turntable. I have the slightly spurious desire to see a graduated scale on the mount movements. I’m used to using research grade optical equipment and whilst the optics have that feel about them the mount, although functional, does not.

The telescope comes with TheSkyX (First Light edition) planetarium software, and also an application called “NexRemote” which seems to allow you to control the telescope using a virtual version of the handset on screen – this seems a bit pointless to me! Other telescope control software is available, and it appears there is an interface standard. The programmer in me is hankering to write my own controller software!

Overall I’m pleased with my new purchase but desperate for a slightly less cloudy night to try it out properly – no doubt more blog posts to follow once I’ve done this! Even at £650 for the telescope it is cheaper than many lenses for my Canon SLR, although it is a little chastening that John Hadley’s 1721 reflecting telescope had a larger primary mirror.

After a few weeks of twilight use I thought it might be useful to add a couple of further comments which don’t really make a full new blog post:

1. You can get and set the telescope azimuth and altitude directly using the appropriate entries in the Utilities menu, without alignment these values are based on an assumed initial position of 0,0. During the hours of daylight, when only a very limited number of celestial bodies may be visible, you can carry out a “single body” alignment using the “Solar System Align” option in Alignment. This allows you to enable tracking, and to Goto specified absolute coordinates – useful if you want to survey heights of neighbouring obstructions.

2. The 5SE does not support autoguiding whilst the 6SE and 8SE do. The NexStar range does seem a bit confusing in terms of the facilities available across the range, the 5SE for another example is the only one to have a built-in equatorial wedge.

Here is a video tour, which covers much of what I’ve written above but includes the sound of me tripping over the cat’s water bowl: