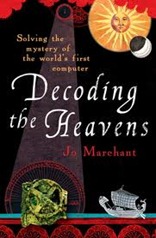 “Decoding the Heavens” by Jo Marchant is the story of the Antikythera Mechanism, a mechanical astronomical calculator dating from around 100BC which predicts the motions of heavenly bodies including the sun, moon and various planets. The best way to understand how the device worked is through videos relating to this book (here) and, rather more slickly (here).

The Antikythera Mechanism was recovered off the coast of the island which provides its name in 1900. The wreck from which it was recovered was also carrying a large number of impressive bronze and marble statues, for example the Antikythera Ephebe. It is believed it was sailing from the Asia Minor coast to Rome, carrying the spoils of war. The wreck lies at a depth of 60 metres which is deep for the technology available at the time, the distinctive metal-helmeted diving suit. It was discovered by the crew of Captain Krontos, who were sponge-divers. As such they did a very risky job, Marchant reports that between 1886 and 1910 around 10,000 divers died from the bends and a further 20,000 were paralysed.

Once they had discovered the wreck they reported it to the Greek government who organised the salvage operation, at the time it was one of the first marine archaeological salvages – it was preceded  in 1884 by a speculative operation in the straits of Salamis which had recovered little. By the 1950s hundreds of wrecks were known in the Mediterranean. Marchant states that this is the first ever attempt to salvage artefacts from a sunken ship, I’m sceptical of this claim – it’s only true for very narrow definitions of each word – Edmond Halley, for example, had a company offering to salvage treasure from sunken ships in the 1690s.

It is curious how little regarded the Anthikythera Mechanism has been over the hundred or so years since its discovery. A measure of this is that the Athens National Museum, where it is kept, were still finding bits of it in 2005! This re-discovery is in some sense understandable, the Mechanism presents a rather unassuming appearance when compared to the statues with which it was found furthermore curating appears to have sharpened its act up over the years. A second reason is that it almost has the air of a fake about it, no other mechanism of comparable complexity was known until around 1000AD, and there was little written evidence for the existence of such devices.

The book works through the interpretation of the mechanism chronologically by researcher, starting with the initial interpretations made by John Svoronos and Pericles Rediadis (1903), Konstantin Rados (1905), Albert Rehm (1907) and John Theophanidis (1934). These are covered quite briefly. These initial studies were based on an exterior view of the fragments and small amounts of visible text, of which more became visible as cleaning attempts were made. It’s worth highlighting here that the mechanism was covered in text, both labels and operating instructions although originally little of this text was discernable. From these studies the mechanism was related to astronomical equipment such as the astrolabe, but was clearly different since it had a more complex clockwork-like mechanism. This chronological approach means that the reader gets a fragmented view of the device (with reverses in interpretation), as the story unfolds. There is also a degree of dramatisation of the story (e.g. “Shit,” said Roger Hadland) scattered through the book, I must admit to finding these rather grating but they are relatively sparse.

After the initial investigations there was a hiatus, with interest appearing to restart in the 1950s possibly spurred by a visit by Jacque Cousteau to the wreck in 1953. Derek De Solla Price was the next to attempt an analysis aided by x-ray imaging of the mechanism which was not available in earlier times. Price was Professor of the History of Science at Yale, in addition to his work on the Antikythera Mechanism he also did early work on scientometrics and the Japanese atomic bomb effort. He finally published his analysis in “Gears from the Greeks” in 1974, this included a detailed description of how the mechanism might have operated based on the gearing made visible by x-ray imaging.

Most recently, commencing in around 1998) there has been a collaboration led by Mike Edmunds at Cardiff University (The Antikythera Mechanism Research Project). They were able to bring to bear better x-ray tomography which was even able to reveal the details of inscriptions inside the accreted masses of the mechanism fragments, alongside Polynomial Texture Mapping, a photographic technique utilising multiple lighting angles and reconstruction to provide maximum information from surface markings. With collaborators at the Athens Nation Museum they also had access to an additional major fragment which had recently been discovered. Their work was published in the journal Nature (here in 2006 and here in 2008).

The comparison between the Wright and Edmunds collaborations is intriguing, in terms of scientific prestige the Edmunds collaboration have published on the mechanism in Nature the premier general science journal. They are a large collaboration with the best equipment, and fit well within the conventional scientific context. Wright, and to a lesser extent Bromley, were different. Wright in particular comes over has being very hard done by in the process, working in his spare time on the mechanism, always apparently “junior” to Bromley (the formal academic) and ultimately being pipped to glory by the Edmunds collaboration. His story comes through because Marchant has clearly interviewed many of the participants, rather than relying on the published literature. From the point of view of the published literature, all that is really visible to the scientific world, Wright’s efforts were virtually invisible until long after he had started work on the Mechanism.

The “problem” for the earliest interpreters of the mechanism is that it was so utterly different from anything else available from the period. There were no other clockwork like devices and few mentions of them, indeed the next instances were thought to be around 1000AD – it looks like the Antikythera Mechanism was dropped into the past from elsewhere. Nowadays it can be seen that this isn’t true. Archimedes and Ctesibius had been making complex mechanical devices in the 3rd century BC, although there are no physical remnants and the written records are sparse. On the other side, mechanisms of this type were in existence through to 1000AD and from then clocks appeared very rapidly suggesting a pre-existing store of knowledge.

In ancient Greece it is believed there were hundreds of thousands of bronze statues, the number left today are in the hundreds, at most. What chance even a few hundred rather unassuming objects to survive? As for the written record, what survives from the period has been repeatedly transcribed to suit the prevailing conditions, and they did not seek detailed descriptions of recondite mechanics. Can you lay your hands on the blue prints for an NMR machine?

The Antikythera Mechanism would have been made on the basis of the astronomical observations of the Babylonians who preceded its Greek makers. They had no “mechanical” model of the motions of the stars but they had a long, deep observational record of their movements. I’m interested in the night sky, and I can’t tell you but the details of the phases of the moon, even where it rises and sets let alone the motions of other planets are a mystery to me in the intuitive sense (I know I can look them up). The ancients had little to do at night, other than look at the sky – I feel I’ve lost something through having so many distractions and a night sky obscured by light pollution.

My Evernote on the book contains page by page comments, and also some links to related material