Book review: Edmond Halley Charting the Heavens and the Seas by Alan Cook 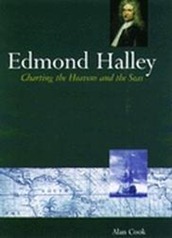 Edmond Halley (1656-1742) was one of the key figures in the early history of the Royal Society. He is best known for predicting the return of his eponymous comet but over-shadowed by contemporaries such as Isaac Newton, Robert Hooke, Robert Boyle, Christopher Wren and Samuel Pepys. The biography I review here is “Edmond Halley: Charting the Heavens and the Seas” by Alan Cook.

The striking thing about the first phase of his life is the degree of responsibility and the quality of his connections at an early stage in his life. He goes to St Helena at the age of 20, breaking his study as an undergraduate at Oxford, with the blessing of both the Royal Society and Charles II; Cook comments that this responsibility at an early age is not exceptional at the time but the degree of high level support is notable. On his return the king directs the university to award him a degree. Following this, at the age of 23, he goes to Danzig to make measurements with Johann Hevelius (1611-1687) at the behest of the Royal Society to check out how Hevelius makes his measurements (he uses so-called open sights, rather than the more recently invented telescopic sights) and the Society wishes to know if his claimed accuracy is reasonable. This is a pretty delicate task for a young man!

On his return from Europe he works with Newton on the publication of Principia. Prior to Principia astronomy is about data collection and classification, after Principia there is a theory that will tie all of these data together (even if the calculations are not trivial)  based on the core idea of universal gravitation attraction following an inverse square law. Halley funds the publication of the book, and is responsible for the printing, along the way learns the contents inside-out which he will later apply to the orbits of comets and the motions of the moon. In a way Halley’s prediction of the return of a comet is the proof of Newton’s theory: at the time comets were rather mysterious it was not clear at the time that they were bodies that orbited the sun but by applying Newton’s theory Halley could predict the return of a comet (everyone knew that the planets were in orbits, even if they didn’t know why).

It’s during this time Halley falls out with John Flamsteed (1646-1719) with whom he had been familiar since the creation of the Royal Observatory and Flamsteed’s appointment as Astronomer Royal. The core of the problem seems to be Halley passing on Flamsteed’s data to Newton for his calculations in Principia. Flamsteed later makes everyone he feels is in the Newton camp his enemy, maybe I need to read a sympathetic biography of Flamsteed!

The creation of the Astronomer Royal and the Royal Observatory at Greenwich, along with Halley’s government funded and mandated trips around the Atlantic mark the start of scientific endeavours funded by the government. Prior to this great programmes of observation such as those by Tycho Brahe and Johann Hevelius are essentially the enthusiasms of wealthy amateurs – they die with their masters. For problems such as the determination of longitude there is a need for extended programmes of observation whose results are available to all. In a sense the clash between John Flamsteed and everyone else represents the birthing pains of this switch, he kept “his” measurements close to his chest and was monumentally reluctant to publish them. This is someone who adopts a lifelong program of detailed measurements who, naturally, will collide massively with someone like Halley, who although he undertook such a program late in his life and was a competent observer in his own right, was much more an aggregator of data from other people.

During his life Halley was respected as one of the leading European mathematicians, a reputation which hasn’t really maintained. I feel this is a little unfair, Halley’s strength was in compiling data on, for example, cometary orbits from a range of sources including other contemporary observers, his own measurements and historical sources. He then applies the most recent theory of the time to make future predictions – most famously of the return of his eponymous comet. He also devises the program of measurement for the transits of Venus and Mercury, which are conducted on James Cook’s mission after Halley’s death, these are used to determine the size of the solar system. (The key parameter to be measured is simply the length of the transit, rather than the absolute time of its start and end). This process of turning theory, in this case Newton’s theory of gravitation, into practical application is critical but less well recognised than the “original seed”. In contrast to Joseph Banks and Charles Darwin, who were passengers on Royal Navy ships, Halley is master and commander – he has a full Navy commission and salary and is a competent seaman.

Halley’s work on geomagnetism and trade winds is also notable – he publishes the first known examples of “isoclines” to visualise his data – and he makes use of a wide range of measurements from right across the globe. In fact as a classical scholar he also investigates historical data which he incorporates into this work and other independent investigations. 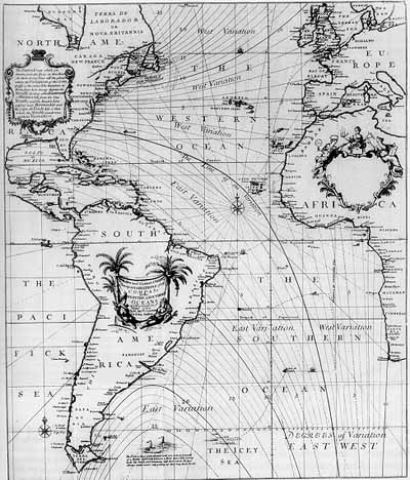 One longstanding project is the understanding of the motion of the moon, it is relevant because if the location of the moon relative to the fixed stars can be calculated in the future then the moon can be used as a clock to determine the longitude: a grand challenge of the time. As Astronomer Royal Halley sought to record the motion of the moon over the 18 year “saronic” cycle, this is the period over which the moon’s orbit repeats. The results of these observations are not published until after his death.

On subjects such as tides, the magnetic field of the earth, calculations of lunar locations, geomagnetism, the source of the aurora Halley is often producing results that are not bettered for a hundred or so years.

Halley strikes me as an early version of Joseph Banks, someone with significant scientific reputation but also someone who can be relied on to competently complete difficult tasks – they share a little more in the sense that it is Banks who helps conduct the transit of Venus measurements in Tahiti that Halley described many years before. It also plays to the idea that, at the time, there were no professional scientists such as there are today, the 17th century model is equivalent to a cabinet minister who wins a Nobel prize for physics.

Alan Cook’s book feels very complete in it’s treatment of the source material, in several places he repeats tables of original measurements and covers some of the mathematics in some depth, the appendices contain yet more detail. However, Halley left nothing in the way of a diary or of personal correspondence so Halley as a person does not come through except by his public actions.