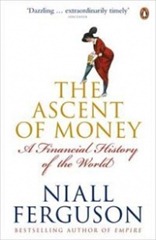 This blog post is my review and notes on “The Ascent of Money: A Financial History of the World” by Niall Ferguson. It’s a thematic run through the key elements of our current global finance system which ends with subprime mortgages and the present day.

Money, tokens representing value, started with the clay tablets of Mesopotamia as “promissory notes” for goods some 4000 years ago. For a very long time the basis of all money was precious metals such as gold and silver, it’s only been in the last 40 years or so that the link to gold has been broken for major currencies. The Spanish were burnt by metal coin when they started extensive mining for silver in South America – devaluing the coin in Europe through excess supply.

Fibonacci helped to introduce Hindu-Arabic numerals to Europe in 1202 through his book, Liber Abaci, which contained commercial calculations including currency and interest rates. Many of the early bankers were Jewish, they were legally restricted from taking part in many sorts of commerce and, through usury laws, the Christians were unable to lend but Jews could (their usury laws restricting lending to other Jews). Banking really took off with the Medici family during the 15th century, originally they dealt in foreign currency but diversified and, critically, became big. Size was important, because large size reduces risk.

Banking innovation then moved north from Italy with three innovations: the Amsterdam Exchange Bank (1609) introduced a standard currency, the Stockholm Banco (1657) started lending and then the Bank of England (1694) started issuing notes which meant there was no need for an account with the bank.

This is followed by the issuing of government bonds, these are essentially the way governments raise debt. Bonds have a face value – and an annual percentage return on their face value but the price at which they are sold in the market may vary. They were initially used by governments to raise money for wars. Rothschild bank made it’s money in this way in the early 19th century. Bonds are seen as very secure investments, but governments do default – most recently the Russia government in 1998.

The final innovation was the limited-liability company, a way by which individuals could band together to undertake longer term projects without risking everything (they only risked the value of their shares). The first of these was the Dutch East India Company founded in 1602 – formed to conduct the spice trade with the Far East (a risky and expensive business). In theory the directors and shareholders hold the company to account but in practice the value of the company shares on the stock market is the real control.

The first great stock market bubble was the Mississippi Company in France and was led by a Scotsman, John Law. Along with with control of the company he also exerted considerable control over the Banque Royale – the French national bank. The result was a system of share sales which spiralled completely out of control with the central bank making almost daily changes in its rules to enable the sale of more shares in the Mississippi company or to support their price. Ultimately the whole system crashed in 1720; Ferguson argues that this led in part to the French Revolution since the whole performance put the French off exciting financial innovations which could have lead to a more stable system.

The depressing thing is that people have been dutifully following these five steps for nearly 300 years!

Next up is insurance, and scientific developments in statistics make an appearance. Ferguson focuses on the Scottish Widows insurance scheme, set up in 1744, to pay pensions to the widows of Scottish clergymen. Although he introduces a wide range of statistical developments including work by Pascal, Bernoulli’s (Jacob and Daniel), de Moivre and Bayes it seems to me the key development were the mortality tables compiled by John Graunt in 1662.

The presence of numerate scientists should not be seen as a panacea though, the Black-Scholes equation for pricing options looks like a piece of thermodynamics: Merton and Scholes won a Nobel Prize for it (Black missed out having died) nevertheless over-enthusiastic application of this equation lead to a fairly serious crash.

Ferguson comments that we are currently in a second round of globalisation, prior to the First World War financial markets were already fairly globalised although quite often under circumstances of colonisation. The outbreak of war necessitated a substantial increase in government support and intervention in the markets and after the war difficult economic circumstances made it easy to continue with this.

It’s interesting to note that the idea of the property owning democracy grew out of the New Deal in the US in the 1930’s prior to that time only 40% of householders in the US were homeowners – the figure now approaches 70%. The same has happened in the UK, although somewhat later with fewer than half of people homeowners in 1970 and a level of approximately 70% now. In a sense the subprime mortgage lending that led to the recent recession is the final playing out of this policy. Ferguson is clearly not too enamoured of the property-owning democracy – seeing it as an over-concentration on a single asset class.

I found this a nice background to understanding economics, it shows how various financial innovations were introduced and how they can contribute to a successful economy. It also highlights how the misuse of such innovations can lead to financial disaster, and does so with depressing frequency. The chronology through the book is not very clear, I suspect he expands on particular instances that best illustrate his point rather focusing on first introduction. Although it has extensive notes and indexes, it could do with a glossary.