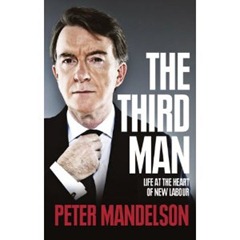 A little bit of politics for this book review: “The Third Man: Life at the heart of New Labour” by Peter Mandelson. It’s been a while since I’ve read much politics; I did go through a spell of reading various diaries and biographies (Alan Clark, Tony Benn, John Major, Churchill) a number of years ago but gave up largely because the diarists and autobiographies seemed unwilling to accept they were wrong on anything, and I had a nasty experience with the biography of Gladstone.

I’m sort of fond of Peter Mandelson, I never really bought the Prince of the Dark Arts thing and he seems to be one of the more coalition minded senior Labour figures.

The book covers briefly Mandelson’s early life but the main focus of the book is the personal relationship between Tony Blair, Peter Mandelson and Gordon Brown from the late eighties all the way through to the 2010 election. Peripherally it is also the story of New Labour: firstly, a switch to a more professional presentational style, followed by the scrapping of Clause IV then it seems to go a bit vague in terms of a guiding policy theme. Mandelson states the central vision of New Labour being of fairness and social justice: but these are ideals I’m sure the Liberal Democrats would cleave to and the Tories would claim the same. Ultimately ideology is not helpful in discriminating between parties rather implementation of policy and no-one is really grasping the nettle of going for excellent implementation.

The central theme of the book was how awful the relationship between Brown and Blair was, lasting for many years and seriously hampering a New Labour programme for reform. The origin of this poor relationship is in the leadership struggle which took place following the death of John Smith in 1994. Communication between the Prime Minister and the Chancellor was poor, and they often seemed to be working largely to block each other. This makes hard reading, it’s like the story of a couple trapped in a loveless marriage “for the sake of the kids”. In some ways I find this disturbing: New Labour effectively provided it’s own opposition whilst in government in the sense that it limited their ability to make policy and enforce change on public services. What happens when the Prime Minister and the Chancellor are working to the same agenda?

Clearly as a Liberal Democrat I’m interested in what he has to say about us, the truth is: not much. There seems to be a degree to which Mandelson and Blair held key early members such as Roy Jenkins in high regard, seeing them as something of a lost tribe who had left the Labour party in the early eighties believing it to be un-reformable. He also describes the talk toward involving the Liberal Democrats in government following the 1997 election, eventually floundering because ultimately there was no need to give anything to the Liberal Democrats. It does seem that there was some quiet local arrangements where Labour or Liberal Democrats agreed not to fight too hard against each other at general elections. I suspect things have changed in both parties now, Liberal Democrats and Labour members of my generation and younger joined well after the split so for us the “progressive alliance” is something of an old man’s tale.

What also comes through for me is how grateful Labour should be for our electoral system, in the 1983 election when Labour polled 27.6% and the SDP-Alliance polled 25.4% they still gained 209 seats as opposed to the meagre 23 that the SDP-Alliance achieved. Similarly at the 2010 election, the Conservatives lead Labour by 7.1% in votes but only 48 seats whilst in 2005 Labour led Tory by just 2.8% but gained a 157 seat lead over the Conservatives giving them a firm majority.

Mandelson’s description of the Coalition negotiations following the May 2010 General Election are consistent with the Laws and Wilson books which I reviewed previously. Labour had not made any pre-election plans for coalition, which I still find odd since Peter Mandelson clearly saw the possibility of a hung parliament; the Labour party was split on whether they should make the attempt and ultimately there was a recognition that the parliamentary arithmetic did not add up.

It’s clear that the current theme of “no cuts” from Labour is a continuation of the Brown policy pre-election, Alastair Darling appears to have made considerable efforts to reach a budget which made at least some effort to start addressing the deficit in the final days of the previous government, in the teeth of enormous opposition from Gordon Brown whilst other members of the team such as Ed Balls were keen to make further spending commitments. Brown’s great fear seemed to have been being labelled a “tax-and-spend” Chancellor, who seems to have ended up a “spend” Chancellor and in the long term that does not add up.

Is this a good book to read? It is if you want to know about the personal relationship at the core of the book, and if want to know more about Peter Mandelson. I’m tempted to read Andrew Rawnsley’s “The End of the Party” for a more detached view.