Why the other ways don’t work

Book review: The Scientific Revolution and the Origins of Modern Science by John Henry 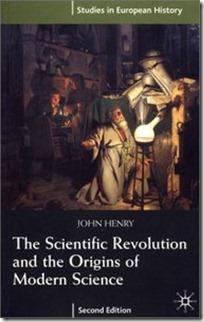 The book I review in this post is “The Scientific Revolution and the Origins of Modern Science” by John Henry. In contrast to previous history books I have read this is neither popular history of science, nor original material but instead an academic text book. My first impressions are that it is a slim volume (100 pages) and contains no pictures! Since childhood I have tended towards the weightier volume, feeling it better value for money.

The Scientific Revolution is a period in European history during which the way in which science was done changed dramatically. The main action took place during the 17th century with lesser changes occurring in the 15th and 18th centuries. The Royal Society, on which I have blogged several times, plays a part in this Revolution and God’s Philosophers by James Hannam is one view of the preamble to the period.

The book starts with a brief introduction to historiography (methods of history research) of the Scientific Revolution, with a particular warning against “whiggish” behaviour: that’s to say looking back into the past and extracting from it that thread that leads to the future, ignoring all other things – the preferred alternative being to look at a period as a whole in its own terms. History as introduced by scientists is often highly whiggish.

Next up is a highlighting of the Renaissance, a period immediately prior to the Scientific Revolution wherein much renewed effort was made to learn from the Classics, the importance of the Renaissance appears to have been in initiating a break from the natural philosophy and theology taught in the universities of the time, which were teaching rather than research institutions.

The Scientific Revolution introduced two “methods of science” which differentiated it from the previous studies of natural philosophy: mathematisation and experiment. Mathematisation in that for sciences particularly relating to physics the aim became to develop a mathematical model for the physical behaviour observed. Prior to the Revolution mathematics was seen almost as a menial craft, inferior to both natural philosophy and theology which relied on logical chains of deduction to establish causes. These days mathematics has a far higher prestige, as illustrated in this xkcd comicstrip. The second element of experimentation means the use of controlled experimentation rather than pure thought to determine true facts.

One of the more surprising insights for me was the influence of magic on the developing science, very much in parallel to the influence of alchemy on the developing chemical sciences: magic was a physical equivalent. Magicians were intensely interested in the mysterious properties of physical objects and were early users of lenses and mirrors. The experience they developed in manipulating physical objects was the equivalent of the experience the alchemists gained in manipulating chemicals. Some of this thinking went forward into the new science the remaining rump of bonkers stuff left behind.

It’s very easy to glibly teach of forces and atoms to students, or perhaps blithely demonstrate the solution to an, on the face of it, tricky integral. However, we take a lot for granted: the great names of the past were at least as intelligent as more recent ones such as Einstein or Maxwell yet they struggled greatly with the idea of a force acting at a distance and so forth and that’s because these ideas are actually not obvious except in retrospect. Mechanical philosophies of Descartes and Hobbes were amongst the competing ideas for a “system of the world” ultimately supplanted by Newton.

A few times Henry refers to differences in emphasis between the developing new science in Britain when compared to the Continent. In Britain the emphasis was on an almost legalistic approach with purportedly bare facts presented to a jury in the form, for example, of the fellows of the Royal Society – theorising was in principle depreciated. This approach originates with Francis Bacon, a former Attorney General and experienced legal figure. On the Continent the emphasis was different, experiments were seen more as a demonstration of the correctness of a theory. The reason for this difference is laid at the door of the English Civil War, only briefly passed when the Royal Society was founded. It is argued that this largely non-confrontational style arose from a need for a bit of peace following the recent turmoil.

In sum I found this book an interesting experience: it’s very dense and heavily referenced. Popular history of science tends to revolve around individual biography and it’s nice to get some context for these lives. I’m particularly interested in following up some of the references to other European learned societies.

The book provides a list of handy links to online resources:

These all look interesting, and although not polished I’ve been using the MacTutor for many years.