A brief return to politics – the Budget

How does a magnet work? 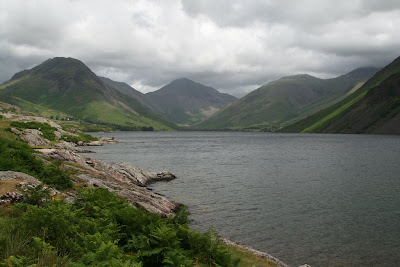 Once again we return to the Lake District for a holiday. This time to Santon Bridge, close to the foot of Wast Water, at Hallflat Farm where we have a one bedroom converted cowshed rather more modern feeling than our previous stays in the Lake District with rather fine exposed wooden beams making it feel almost tent-like. The farm has been turned over completely to tourism, with half a dozen or so rentable units. We have a little area to sit out in the sunshine and neighbours to whom we can merely nod if we so desire. Shopping seems to be best done at the village store in Gosforth, a few miles down the road. There are local great-spotted woodpeckers the male apparently sports a natty red beret, the female is a little more subtle. Mrs SomeBeans managed to capture some video, I’ve never had a clear sight of a greater-spotted woodpecker – here they’re regular visitors to the bird feeder outside the kitchen. 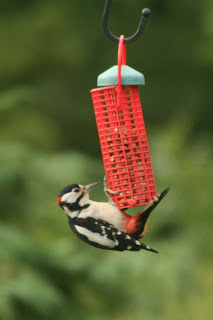 It is traditional for each Lake District holiday that I show Mrs SomeBeans a campsite with it’s distant toilet block and flimsy canvas walls and highlight the comparison with the great luxury in which we stay. I saw much of Europe and the UK from a tent as a child, and whilst this no doubt greatly broadened my horizons I intend never to sleep under canvas (or nylon) again.

Last year we stayed at Chapel Stile in Great Langdale, a fine location from which we walked everyday with only one brief trip in the car to the head of the valley to ascend Bow Fell (whose head remained steadfastly in cloud). The cottage we stayed in was good, with an excellent kitchen the only drawback slightly restricted parking (not a problem if you never use the car) and rather limited outdoor seating. My parents honeymooned at the Dungeon Ghyll Hotel (famous amongst climbers), a mile or so up the road from our cottage. For shopping we used the local village general store which furnished our needs admirably, providing in addition to food, two very light macs which turned out to be rather useful. The previous two years we stayed in Borrowdale, at Rosthwaite, again providing walks from the door for most of a week. A slightly quieter location with fewer neighbours. Shopping this time was in Keswick, or rather Booths – a rather fine slatey version of Waitrose.

Alfred Wainwright is the undisputed king of the Lakes for people like us, not only was he intensely well-organised – planning his fantastic guides to be completed over a 13 year period which he hit almost to the week, he was fond of peaks and hated people. We differ only slightly in that we like the valleys too, and enjoy the wide variety of nature. A successful days walk for us is one in which me meet no other people and see some interesting nature: sundews, butterwort (carnivorous plants), miscelleous beetles, birds, orchids, and rocks. It’s unlikely that Wainwright strode along the broader, flatter paths with the Imperial March from Star Wars running through his mind, which is what Mrs SomeBeans and I do – it’s the syncopation of marching foot on gravel path.

What we did on our holidays this year (sounds like a school project):

Sunday: We venture out on a short walk of our own devising over to Nether Wasdale, part way around it starts raining VERY heavily, and we trudge through the rain for an hour and a half or so. Towards the end my well water-proofed boots are squelching vigorous and I struggle to identify any part of my body which is not wet. On our return to the cottage I wring out my socks. In the afternoon we head out to the local countryside: visiting Seascale, neighbour of the Sellafield nuclear reprocessing plant, Drigg (low level waste disposal). Ravenglass (we return here for a walk on Friday), sporting the terminus of a dinky steam railway. Later we head up towards Eskdale Green, a mile or so from Boot where the Cumbrian shooter finally met his own end. We’d passed flowers by the roadside on the way to Seascale (a grim settlement whipped by the wind, featuring much gray concrete render). Eskdale, in which Boot lies, is different – almost fairy tale with heavily mossed deciduous woodland and little crags. 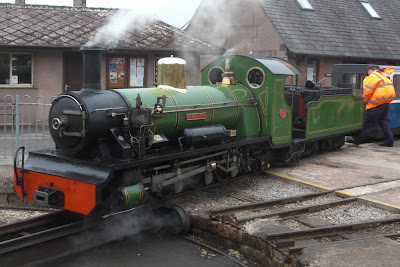 Monday: we do a walk from “the book” (#12 Wast Water and Irton Fell), taking in the foot of Wast Water and heading up Irton Fell. The walk is very varied with some meadow on the valley floor, lake side, steep brackened climb, forestry woodland, and high moor. The view up Wast Water towards Great Gable (scaled on a previous holiday) is excellent. Nature-wise we catch our first sight of sundew, a very large caterpillar and note we are walking on granite, not the slate of Borrowdale. Very few people seen.

Tuesday: a trip to Ennerdale to walk around the Water and then onto St Bees where we looked in rock pools. We did the book-walk (#13) around Ennerdale Water, although it’s a very simple affair. The path on the left of the lake is a forestry road, and hence well-made, we met no-one on this stretch although a few vehicles passed us in each direction. The path back along the right of the lake is much more rugged and was much busier, this is part of the coast to coast path. For lunch, naturally overlooking the lake, we were joined by a frog. St Bees and Egremont seem to have seen better days, they both have quite significant buildings (St Bees a smart school, a hall and a large church) which don’t seem consistent with their current situation. Honeysuckle seems to be the flower of the week. 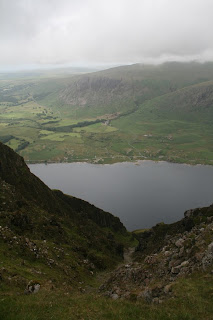 Wednesday: another trip of our own devising, today the weather was uncertain in the morning so we made a relatively late start to walking (10am). We parked close to Nether Wasdale and went up to Whin Rigg and then on to Illgill Head then dropping down into Wasdale Head. As it was clouds wafted across us for an hour or so in the morning then it cleared, and as we finished walking just before 4pm it was fairly clear and sunny. For the first time on a walk, Mrs SomeBeans and I parted ways at Wasdale Head. I walked along the near shore of Wast Water, whilst Mrs S. took the road. This was for fear of the screes, probably justified, there are two bands of scree: the first is fairly civilised with a path across it. The second is rather more challenging, with no discernable path just a jumble of boulders of man-size and above. I collected an impressive scrape on the approach to the screes, spotting a distant Mrs S across the lake apparently pulling ahead I hurried on rather quicker than was wise and ended up head first in bracken! I am forming a fine scab, the like of which I have not had since childhood.

Thursday: We walked up Overbeck to Dore Head from where fantastic views of Pillar and into Mosedale are available. The original plan was to head up on a great loop over Red Pike but this turned out to be a bit over-ambitious. We contemplated Yewbarrow which looks quite difficult to get onto, Wainwright appears to agree but finds a easier route. Cows were used in the valley, and each cowpat had it’s own little forest of mushrooms.

Friday: A wet day with intermittent showers most the morning as we did the Ravenglass and Muncaster walk (#15), this is a fairly long walk (7 miles) well suited to the poor weather, with a large fraction of the route under cover of trees and relatively low altitude – even so we briefly entered cloud on the Muncaster ridge. Highlights were the ruins of a Roman Bath on the outskirts of Ravenglass, these ruins comprise walls several metres above ground level including complete arches and an alcove, very few Roman ruins in the UK extend above ground level. A second highlight was a infestation of tiny frogs on a forest path. 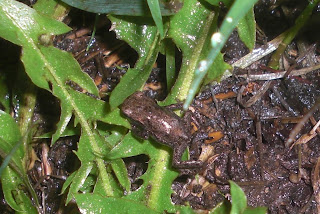 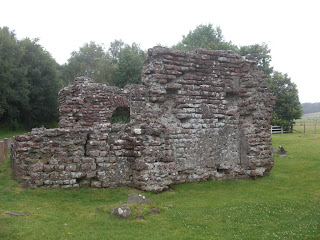 All in all not a bad holiday, weather about par for the Lake District with 2 days seriously affected by rain, and the rest threatening rain at some point. Not as much big mountain walking as we have done in the past, but more varied with trips to the seaside. The area feels quieter than the central areas of the Lake District, with free or honesty box parking. Once again mobile phones entirely useless for the entire length of the holiday due to lack of reception.